Latest figures from the Australian Bureau of Statistics show the weakest September-to-September growth in South Australian retail turnover since 2013.

Average turnover increased by just 1.81 per cent in the 12 months to September this year. 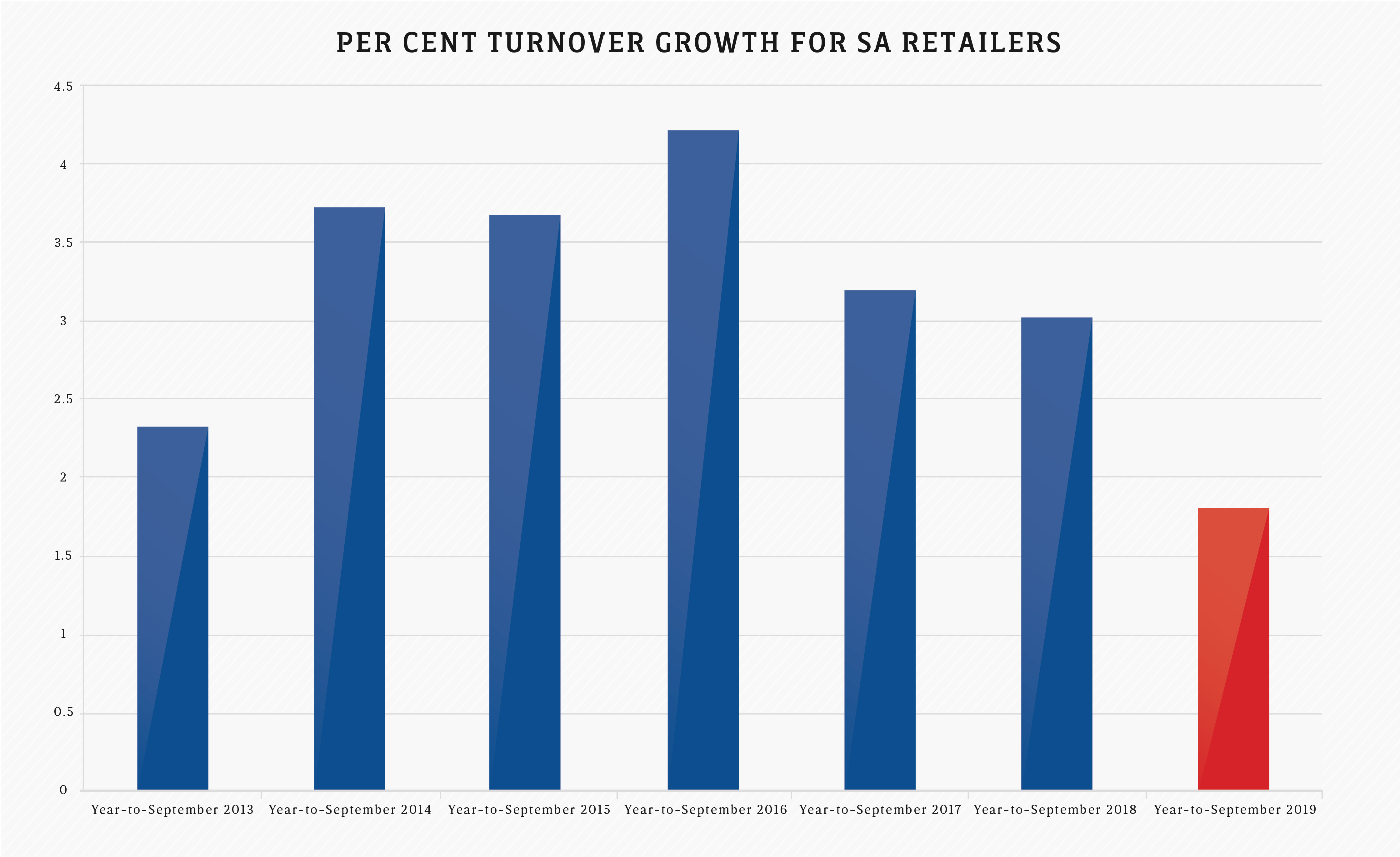 “Our members are mortgaging their houses … to make their businesses run,” he said, adding that slow wages growth was contributing to the malaise.

Wages across the public and private sectors in SA have grown at a rate below three per cent, year-on-year, since about June 2014.

The most recent wages growth figure – 2.3 per cent in the year to September – is as high as in December last year, but well below the historic average. 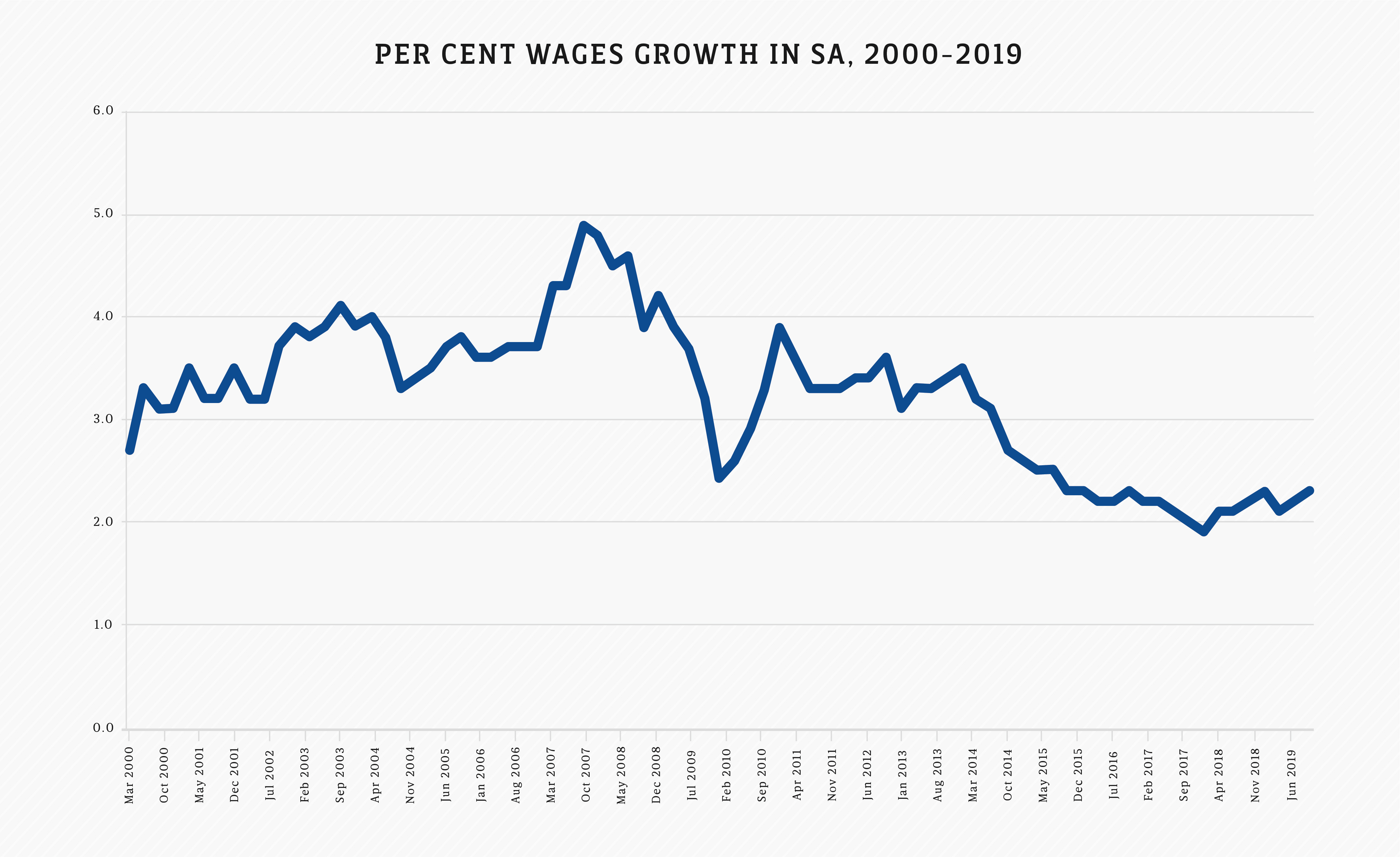 Business SA spokesperson Anthony Penney told InDaily many retailers depend on the Christmas trading period to get back into the black, and that expectations were low this year.

He said retailers had been expecting a boost in consumer spending this year as a result of record-low interest rates and income tax cuts from the last federal budget – but it hasn’t materialised.

“Australian household debt to income is among the highest in the world.

“It seems people are taking any additional disposable income to pay down their debt.”

Penney said the cost of doing business was also holding retailers back, nominating energy and water costs, and taxes, as the main impediments.

I don’t know that anyone, to be honest, has a simple answer to what drives national and individual consumer decisions.

Director of the South Australian Centre for Economic Studies at the University of Adelaide Michael O’Neil told InDaily economists across the country – not just in SA – were struggling to explain why consumers weren’t spending, despite some significant stimulus.

“(But) funds are just being diverted away from consumption expenditure to paying off mortgages.”

In South Australia, he said, slow population growth and an ageing population were additional impediments to growth in retail trade.

“This combination of demographics … fuelling a lack of housing demand is really impacting the retail sector (along with) a lack of increase in wages,” said O’Neil.

“What underpins retail trade … is a population that is growing reasonably.”

Jessica McCabe-Moran, the marketing manager for Adelaide Arcade jewellery store Gerard McCabe, told InDaily that although the last few years have been “difficult” because of changes in consumer spending habits, she was optimistic about prospects for this Christmas trading period.

Christmas is no longer the be-all and end-all.

“The last few years have been difficult (but) we’re feeling positive about this year,” she said.

“Everyone’s spending patterns are changing (and) I think we’re prepared better for the changes.

She said consumers were increasingly sensitive to online sales events and were spreading out their retail spending more than in previous years.

“These sorts of big sales events have probably changed (consumers’) behaviour,” she said.

“It’s taken retailers a bit longer to catch up.”

He said his business had seen growth – albeit “almost insignificant” – over the past year, but that Foodland was “certainly positioned for growth” going into 2020.

“With the influx of international competitors … we’ve been found to be resilient and effective.

“I think things are okay (… but) things could always be better.”

He added that he was always looking for opportunities to expand the footprint of his business and its brand exposure and said the supermarket chain had proved the resilience of its brand in South Australia – especially in its reputation for fresh food.

Treasurer Rob Lucas said consumer spending had been “sluggish” across the country, which was “one of the reasons why the Reserve Bank has been instituting cuts in interest rates”.

But he said the State Government’s emergency services levy cuts and a prospective reduction in water prices should help support consumer spending in SA.

He said that the Government also wanted to loosen what he described as the most restrictive shop trading hours regime in Australia, adding: “I don’t know that anyone, to be honest, has a simple answer to what drives national (and) individual consumer decisions.”