Of the business leaders surveyed, 20 per cent said they viewed the economy as improving, down from 56 per cent last year.

It’s the lowest figure since 2015, when just one per cent of those surveyed believed the economy was improving and 78 per cent believed it was going backwards. 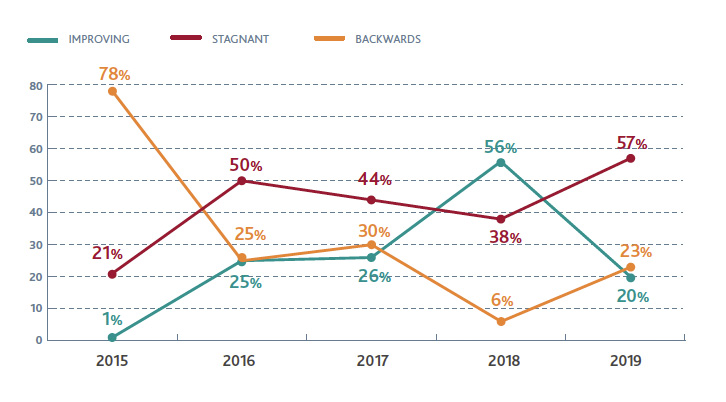 Confidence in the economy has crashed in the latest survey. Graphic: BDO

More than half of those surveyed – 57 per cent – reported that they believed the economy is stagnating.

The remaining 23 per cent said they felt the economy was going backwards.

“The eastern states still remain the preferred place of doing business even though costs are high,” one respondent is quoted in the BDO survey report as saying.

“Mindset is an issue, in that SA is perceived as being away from the cutting edge of Sydney and Melbourne.”

The survey was released at a BDO launch event last night.

Beyond the headline confidence result, the survey revealed that almost half of respondents – 48 per cent – believed energy costs were hampering their growth.

The figure is near identical to the result – 47 per cent – in 2017, the year after the statewide blackout.

But respondents were significantly less worried about energy reliability this year than they were in 2017.

Asked the following – ‘If you had five minutes with the Premier of South Australia, which one of the following would you ask him to prioritise?’:

Land tax changes were announced in the State Budget in June, with the business survey taken in August, before the issue developed into a major political headache for the government.

Asked whether “the recent changes to land tax rates and aggregation are fairer”, 49 per cent of respondents chose “no”.

“The land tax issue is a big sign to property investors in SA that they should invest elsewhere. I see little incentive to invest in property in SA – the share market is much easier and cheaper,” one respondent is quoted anonymously as saying.

The BDO report stresses that the survey was taken before the Government announced recent changes to its land tax policy.

Businesses surveyed last year were more optimistic about their prospects in 2019 than the reality of the past year reflected. 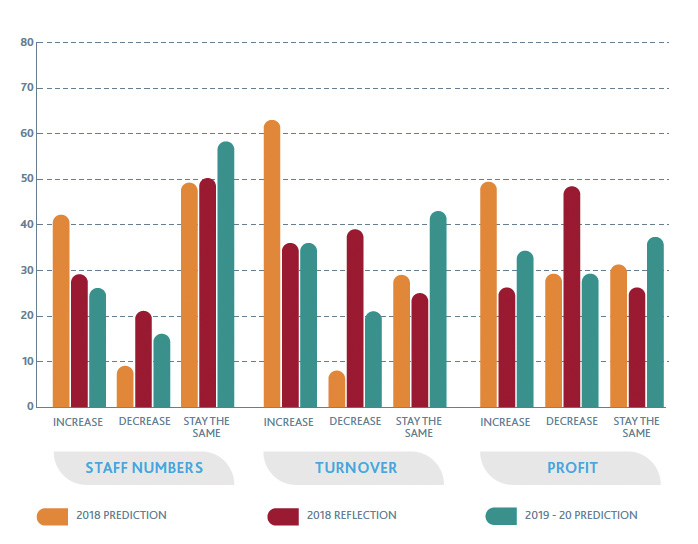 Business expectations were more optimistic in 2018 than the reality in 2019. Graphic: BDO

“Many more were expecting an increase in staff numbers and profit than actually achieved it, while a decrease in turnover was clearly unexpected by the vast majority,” the report reads.

“Predictions are far more subdued for the coming year, with most respondents expecting all three measures to hold steady.

It’s a dramatic crash in optimism.