The US-based media company chaired by Rupert Murdoch, which publishes The Advertiser, Adelaide metropolitan sister paper The Sunday Mail, plus national broadsheet The Australian, released its annual report on the Australian Stock Exchange this morning.

The document reveals that The Advertiser’s average daily paid print circulation fell to 97,173 in the 12 months to June 30 this year.

It’s the first time the figure has fallen below 100,000 in at least seven years.

Circulation of both Adelaide papers has been falling each year since 2013, according to the company’s 2013-2019 annual reports. 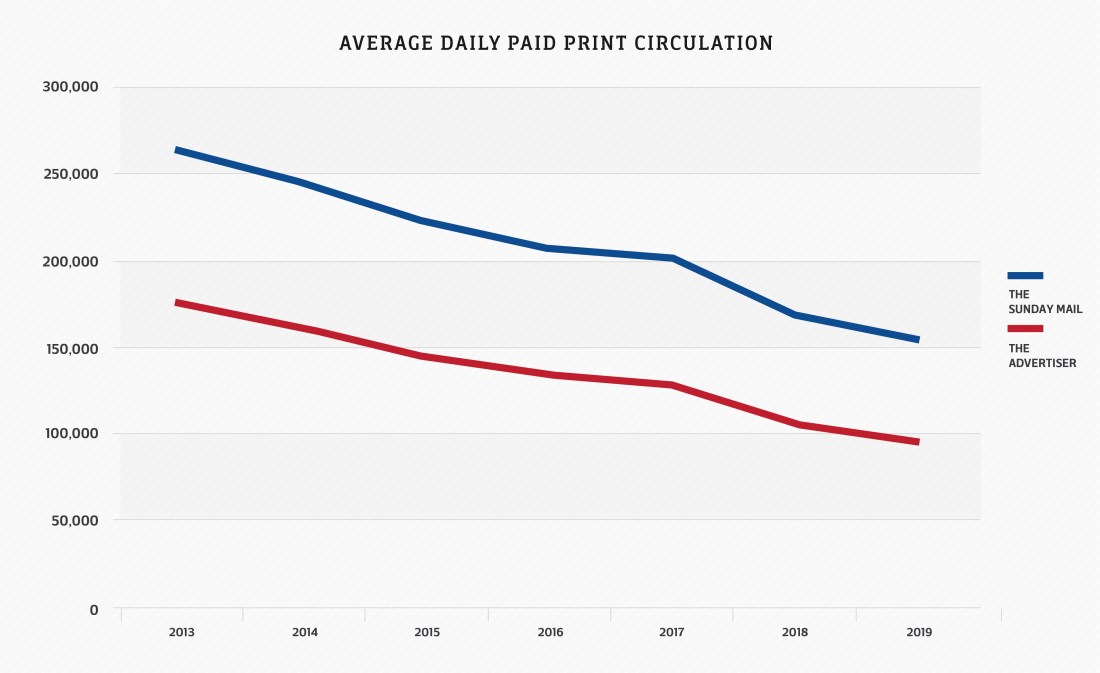 Average daily paid print circulation of News Corp’s two Adelaide mastheads has declined each year since 2013, according to figures in its annual reports.

News Corp says its circulation figures for 2018 and 2019 come from “internal sources” and previous years’ figures come from Audit Bureau of Circulation data.

But more worrying for the company than declining newspaper circulation – suffered across the global newspaper industry in line with news consumers’ migration to the internet – is a declining online paid subscriber base in Adelaide.

Despite the combined monthly print and digital audience for The Advertiser growing from “over 1.4 million” in 2013 to “1.8 million” this year, according to the reports, the number of readers willing to pay for the online version has been falling.

According to the News Corp annual reports, combined print and digital audiences for The Advertiser have been growing, but fewer readers are paying for the news service online. News Corp says total monthly audience figures come from Enhanced Media Metrics Australia and Nielsen data, and subscriber figures come from News Corp “internal sources”. The “over 1.4 million” figure and the “almost 1.7 million” figure are direct quotations from the annual reports.

Before 2017, News Corp’s annual reports did not specify The Advertiser’s subscriber numbers.

However, the company reported a $37 million decline in circulation and subscription revenues across all of its Australian mastheads in 2016 – blaming foreign currency fluctuations – offset by “price increases and growth in digital subscribers” and “increased other revenues”.

It was a similar story in 2015, when circulation and subscription revenues across News Corp Australia had “declined $37 million due to the negative impact of foreign currency fluctuations as price increases and growth in digital subscribers offset print volume declines … partially offset by increased other revenues”.