The Marshall Government’s land tax aggregation move is being blamed for the latest hit on business confidence, this time in the Business SA – William Buck survey of business expectations.

Today’s Business SA survey shows business confidence has fallen to its lowest level since September 2017, when the business body says sentiment was lowered by the Labor Government’s threatened bank tax. 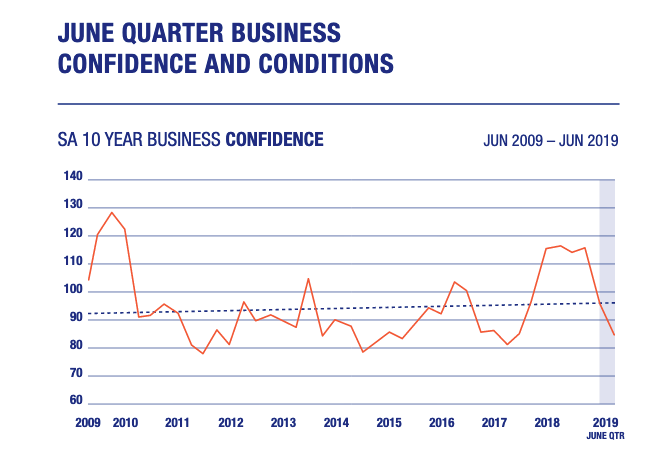 The pattern of sentiment is remarkably similar to the Bank SA survey, which also shows a spike in confidence leading up and following the March 2018 election, only for sentiment to subsequently fall.

“Responses to our questions show businesses are expecting a big hit, which will flow to the entire state’s economy,” he said.

Penney said small and medium-sized businesses were worried that landlords will pass on the aggregation increases, while property owners were considering selling and moving their investment interstate, or downsizing their landholdings.

His comments contrast with those of Business SA board member and Premier’s Economic Advisory Council member, Geoff Rohrsheim, who told InDaily last week that the land tax “loophole” needed to be fixed and business would adjust.

“I don’t think there’s anyone who could argue people who own millions and millions net worth of property shouldn’t be paying their way, in the same way as people like me who employ a lot of people pay a lot of payroll tax every month… that’s the way it works – that’s our contribution to the state,” he said.

He said SA “can’t have loopholes like that” but “the problem is in the transition”.

The Government predicts its aggregation policy – which will prevent multiple landholders paying separate rates for property kept in different trusts and other legal entities – will net an additional $40 million but the property industry believes the impact will be much greater.

The Business SA survey showed confidence fell to 84.4 points in the June quarter – a “significant” 32-point fall in just over six months.

Penney was cautiously optimistic about some other signs in the survey, including “only” a slight dip in general business conditions.

“Businesses are also telling us that cost of materials are stabilising and it’s slowly getting easier to source labour – both are positive signs.

“But we need to be cautious when considering these positive signs, because a fall in confidence has significant flow-on effects.”

Just over 40 per cent of respondents expect the state’s economy to weaken over the next year – up from 36.6 per cent in March and 33.1 per cent in December.

The weakening business confidence comes as the broader Australian economy faces challenges across a range of sectors.

World markets, including the ASX, have been buffeted this week by increasing trade tensions between the US and China – Australia’s largest trading partner.

The construction and retail sectors have also had a rocky year so far.