Michael Smyth leads Clement Vehicles, an electric car start-up that in 2016 won $10,000 as a finalist in the State Government’s Low Carbon Entrepreneur prize, to develop two prototype electric cars – a sports car and a four-wheel drive.

He and his team of engineers designed those vehicles, ready for prototyping and manufacture. But that’s as far as they have got.

Smyth says he expects to start manufacturing the vehicles within the next few years, but whether he does so in South Australia or overseas depends on the willingness of the Federal Government to provide policy support.

He argues that crash-testing requirements in Australia are unnecessarily onerous, undermining the potential of a specialist electric vehicle manufacturing sector in SA. In addition, fuel efficiency standards in Australia are some of the worst in the OECD – robbing consumers of higher quality cars and slowing the transition away from petrol. 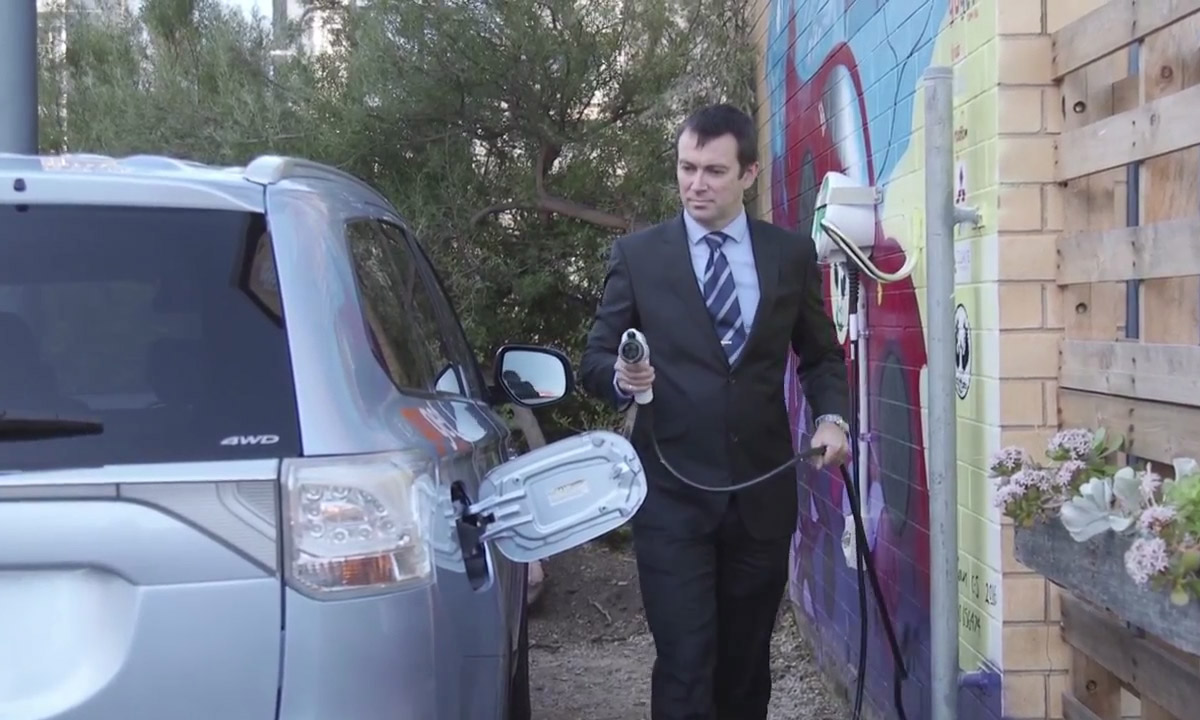 Engineer Michael Smyth about to plug in and charge up an electric four-wheel drive. Supplied image

Smyth points to the United Kingdom, which offers regulatory exemptions to manufacturers of small numbers of vehicles and boasts the largest small-volume specialist vehicle manufacturing industry in the world.

These specialist manufacturers, each producing fewer than 10,000 vehicles a year, include globally recognised companies such as Bentley and Aston Martin.

Similar laws apply in New Zealand, but for manufacturers of up to 500 vehicles.

“We have developed a couple of vehicles – the designs are ready for prototyping and production.

“I am going to make them, but whether I make them in New Zealand (or South Australia) is up to our government.”

Specialist manufacturers in Australia have access to the Low Volume Scheme for New Vehicles – for up to 25 vehicles, or up to 100, depending on the vehicle category – that provides major concessions against Australian Design Rules.

The federal pollies in the Liberal Government … are quite focused on electric vehicles, despite all the stuff you heard during the election campaign

The most significant of these applies to crash testing, which can cost millions of dollars.

Smyth says the revenue from the first 25 of his cars would not be enough to cover the cost of the crash testing that would be required to sell his 26th.

Moreover, he argues that Australia’s low take-up of electric vehicles, compared with that in other developed countries, can be explained by a failure to implement fuel efficiency standards that would encourage a transition from petrol to hybrid, to electric vehicles.

Only about 0.3 per cent of the vehicles sold in Australia in 2018 were electric.

By comparison, 3.4 per cent of the vehicles sold in the US in December 2018 were electric.

Australia remains “too far away from any sort of critical mass” of electric vehicle sales to prompt serious investment in manufacturing here, says Smyth.

“We aren’t at government policy that will (get) us towards one per cent, where … there’s really a prospect of it being a viable venture,” he says.

“What I’m waiting for is (for Australia to get) further up the adoption curve.”

Another lever the Federal Government has to encourage the take-up of electric vehicles – via hybrids – is the imposition of fuel efficiency standards similar to those imposed on companies in Europe and the US.

ACE-EV director Greg McGarvie said at the time that his company had orders for 100 electric delivery vans to be assembled at the plant and hoped to scale up to 15,000 electric vehicles by 2025.

McGarvie told InDaily his business partners for the venture in Germany and Taiwan were concerned by the rhetoric of Prime Minister Scott Morrison about electric vehicles during the election.

Morrison told reporters then-Labor Leader Bill Shorten wanted to “end the weekend” with his party’s target of 50 per cent electric vehicle sales by 2030 – but also insisted the Liberal Party had “no problem” with electric vehicles.

McGarvie said he has sought and been given re-assurances by the federal Liberals that despite its rhetoric during the election campaign, it supported the development of the electric vehicles manufacturing industry in Australia.

“The federal pollies in the Liberal Government … are quite focused on electric vehicles, despite all the stuff you heard during the election campaign,” he told InDaily.

“To have that killed off just by pure politics … I think they will have a bit more sense (in) government than that.”

“Through the Australian Renewable Energy Agency, the Government has provided funding for EV infrastructure, such as charging stations, and invested in advanced manufacturing businesses through the Clean Energy Finance Corporation,” he said.

A spokesperson added: “The Minister looks forward to meeting with industry and stakeholders, and discussing future opportunities.”