The big four banks opened between 6.0 and 3.75 per cent higher this morning after Commissioner Kenneth Hayne slammed the sector’s culture and regulatory failings, while stopping short of recommending the big banks be dismantled.

But traders dropped Mortgage Choice like a hot potato after Commissioner Hayne recommended the industry move from a commission-based pay structure to a fee-based model in the interest of greater clarity for consumers.

The suggestion drove down Mortgage Choice shares by 30.5 per cent in early trading.

At midday, ANZ was up 6.11 per cent, Commonwealth Bank added 4.69 per cent and Westpac increased 6.59 per cent. NAB rose 4.74 per cent despite its chief executive and chairman being singled out for criticism by Commissioner Hayne.

Investors seemed happy when NAB chief executive Andrew Thorburn’s announced today he was cancelling his planned leave and leading the bank’s response to the royal commission.

Thorburn’s future has been subject to speculation from analysts and investors since December, when he announced he was going on leave both before and after the release of the Hayne report.

“I am proud to be CEO of NAB, and am more determined than ever to lead NAB with even greater urgency and intensity and show through our ongoing actions that we do what we say,” Thorburn said in a statement.

Commonwealth Bank, ANZ and Westpac all acknowledged the commission report late on Monday after its release, signalling their cooperation.

CBA CEO Matt Comyn said there was a “clear need for change”, while ANZ described the Hayne report as a “defining moment” for the bank and the financial services industry.

“It has been a humbling experience for me, our leaders and all our people: We have learnt from this and accepted responsibility for our failings,” ANZ chief executive Shayne Elliott said on Monday night.

Westpac said it had already taken steps to address some of the issues raised.

“Our focus remains on learning from the mistakes of the past and preventing them from happening again,” chief executive Brian Hartzer said.

Under one of Commissioner Hayne’s proposals, mortgage borrowers would pay a fee rather than trailing commissions over the life of a home loan.

The mortgage broking industry attacked the royal commission, saying it “failed” to understand its role in the home lending market.

“This could force up-front commissions to rise in order to compensate for reduced revenues to brokerages, which in turn will lift interest rates and make housing affordability more difficult,” he said. 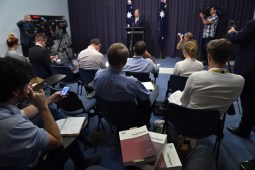 More than half of home loans in Australia are written through mortgage brokers.

White said the commission recommendation would “hand even more power to the big banks” and showed “just how out of touch he [Commissioner Hayne] is when it comes to brokers”.