'Choxit' in the East End

The closure of the old Royal Adelaide Hospital and disruptive roadworks from a series of nearby infrastructure projects had seriously reduced the customer base in the East End in 2018.

All of the chocolate cafés in the precinct closed their doors (Max Brenner, Cocolat and San Churro) or made plans to close them (chocolatier Steven ter Horst intends to set up elsewhere in 2019).

The shock of the hospital’s move has become a new ‘normal’ for many traders in the precinct, the road works have all-but ended and a tram now regularly delivers customers from North Terrace into Rundle Street.

East End advocate and developer Steve Maras has pointed out that a series of new hospitality venues also opened in the East End last year.

San Churro became the last of them, with the company has deciding to re-open the store, under its own management, on Christmas Eve.

But some of the same issues that caused San Churro franchisee Jagjit Thandi to wind up her business in November will persist in 2019 for its new corporate owners.

Turnover remains sluggish and the impending construction of the 20-storey apartment tower Monument, expected to start this year, will be a serious threat, they concede.

“We’re not out of the woods yet – particularly with the construction,” San Churro operations director Matthew Brush told InDaily.

“We see light at the end of the tunnel once the whole precinct is operational. We believe there’s blue sky there.”

The company replaced some ageing furniture and equipment and re-opened the store just in time for Christmas Eve.

Brush said the store, like others in the East End, would be “operating in tough times”.

“We need to knuckle down and keep labour tight and control our costs,” he said, adding that Thandi had had to work in the store alone during the day because of low turnover before nightfall – a situation that began with the closure of the hospital – and which has continued under the new management.

He said the new manager had experience managing a store in Victoria and was a very experienced operator.

“The manager has to work in there by himself during the day,” said Brush.

“She (Thandi) was also working at skeleton staff during the day … which is what we need to do.

“Prior to the hospital moving there was a very healthy trade during the day and we didn’t need to run with one person on.”

About 15 casual and part-time staff members were offered their old jobs back.

“We’ve kept most of the team that was there prior to the closure,” said Brush.

“Everyone was re-offered their role.

“They’re just working in the evenings.”

Despite the slow trade so far, however, Brush said he was hopeful the store would be able to improve its fortunes in the new year and trade through the construction of the tower.

Brush said San Churro would be offering a new, tapas-style menu of chocolate products and desserts starting this month, and will be handing out free churros – Spanish fried pastry – on Saturday January 19 from 5pm to celebrate the re-opening. 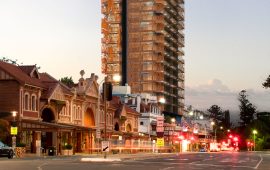 “For the first time we’re going to have a chocolate and desert ‘tapas’ menu,” he said.

“A customer can come in and pick and choose what they like, served in beautiful little terracotta ramekins.”

Director of C Projects, a joint venture partner in the Monument development, Stephen Connor told InDaily that construction was expected to begin this year and last for about 18 months.

He said his organisation would do everything it could to minimise the impact on nearby businesses.

“We would be very conscious of all of the (nearby businesses),” he told InDaily this morning.

“We haven’t got a firm date, but we certainly aim to get that (construction) kicked off this year.”

Asked what the developers could do to minimise the impact, Connor said “that’s a discussion we’ll have with the tenant at the time”.