Harbour – whose approach was firmly rejected by the Santos board and senior management yesterday – has responded in extraordinary fashion today, questioning Santos’s commitment to South Australia and accusing it of gutting its local workforce.

The US private firm first made an offer for Santos on April 3 and in recent days has increased the value of its proposal to $US5.21 per share, up from the original $US4.98 per share.

The revised proposal indicated the offer price would be further increased to the equivalent of $A7.00 per share if Santos agreed to hedge 30 per cent of its oil-linked production in 2020.

However, Santos said late yesterday that the Harbour Energy offer did not represent the full value of the company and, when combined with the associated risks, was not in the best interests of Santos shareholders.

The company said it has now terminated all discussions with Harbour Energy.

“The final proposal was a highly leveraged private equity-backed structure that, prior to implementation, would have required Santos to provide significant support for Harbour’s debt-raising and to hedge a significant proportion of oil-linked production,” Santos said.

However, Harbour hit back hard today, saying that a “short-sighted” Santos had been slashing its contributions to South Australia’s economic and community life.

“Santos has cut hundreds of jobs from its South Australian workforce and slashed millions of dollars from its support of important local community institutions and events,” a spokesperson said.

“Harbour came with an unashamed vision to grow the company and was committed to keeping and building up the headquarters of Santos in Adelaide. This short-sighted rejection is a missed opportunity for the state and its economy.”

“Santos has been a proud South Australian, employing people here for more than 60 years and investing in the community,” a Santos spokesperson said.

“Harbour’s vision doesn’t stack up with the US$8 billion in debt that it was bringing to the table.

“After a few tough years, Santos has reduced its debt and is in a very strong position to continue to invest and grow in South Australia, and restore fully-franked dividends for shareholders in the near term.

“We will be a pillar of the South Australian community for decades to come.”

In an extraordinary move, Harbour released its own analysis of Santos’s job cuts since 2014.

It estimates Santos has reduced its South Australian headcount by 45 per cent – or 760 jobs – over the three years to the end of 2017. 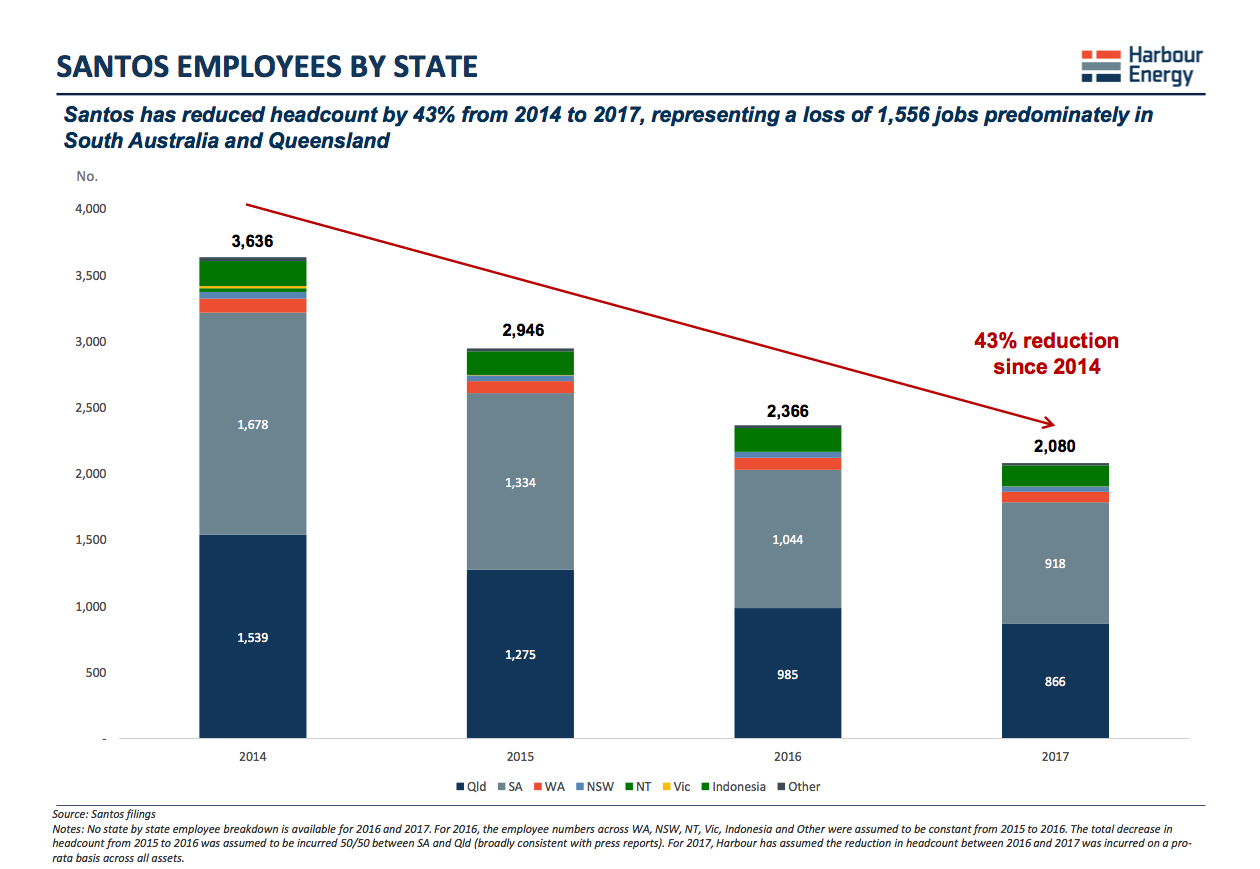 In its statement last night, Santos said sticking with its current strategy would provide best value for shareholders.

“Santos has a well-developed strategy, strong leadership and management team and outstanding growth opportunities that the board believes will deliver superior value for its shareholders over time,” said Santos chairman Keith Spence.

The shares were trading at $5.07 before Harbour’s offer was announced to the market in April.

Analysts at RBC Capital Markets said the rejection was a shock given there are few other interested parties, and said the onus is now firmly on the Santos board and executives to deliver on their strategy and grow the company.

They said Harbour had gone to “great lengths” to furnish the Santos board with an attractive bid, having upped its offer and put in place bid financing, but said the hope of taking over the company had now been terminated.

“If Harbour does come back to the negotiating table with the Santos board it has a hide not made of leather but made of some sort of titanium/Kevlar weave,” RBC Capital said.