South Australian businesses Australian Carob Company and The Carob Kitchen are the two largest carob producers in Australia and have found export success with their carob bars, powders and syrups.

Carob rose to popularity in the 1980s as a chocolate substitute because of its natural sweetness. It is again experiencing a spike in demand as a result of its nutritional value, which includes its high fibre, calcium and protein levels.

Carob powder is now used in milkshakes, as a natural chocolate sweetener and in baking. The syrup is used as a spread and can be enjoyed on pancakes, ice-cream and breakfast cereals.

The Australian Carob Co has developed what it claims to be the world’s purest carob product, which is also nut and gluten-free.

The growing company has been invited to showcase its products at Portland Veg Fest this month in the United States ahead of plans to expand global exports next year.

South Australia is the nation’s largest carob-producing state and exports to many countries including Singapore, Japan, the United States and the United Kingdom.

Australian Carob Company founder Michael Jolley said although the Australian carob was still finding its place within the global food industry, its quality was unparalleled.

“There are a lot of health benefits with carob and the benefit of using it without adding sugars,” he said.

“It is very good for your digestive system, high in fibre – it’s got vitamins, protein, calcium and iron. It is 100 per cent organic.

“We are totally nut-free and gluten-free because we are the only non-contaminated carob in the world with full traceability.” 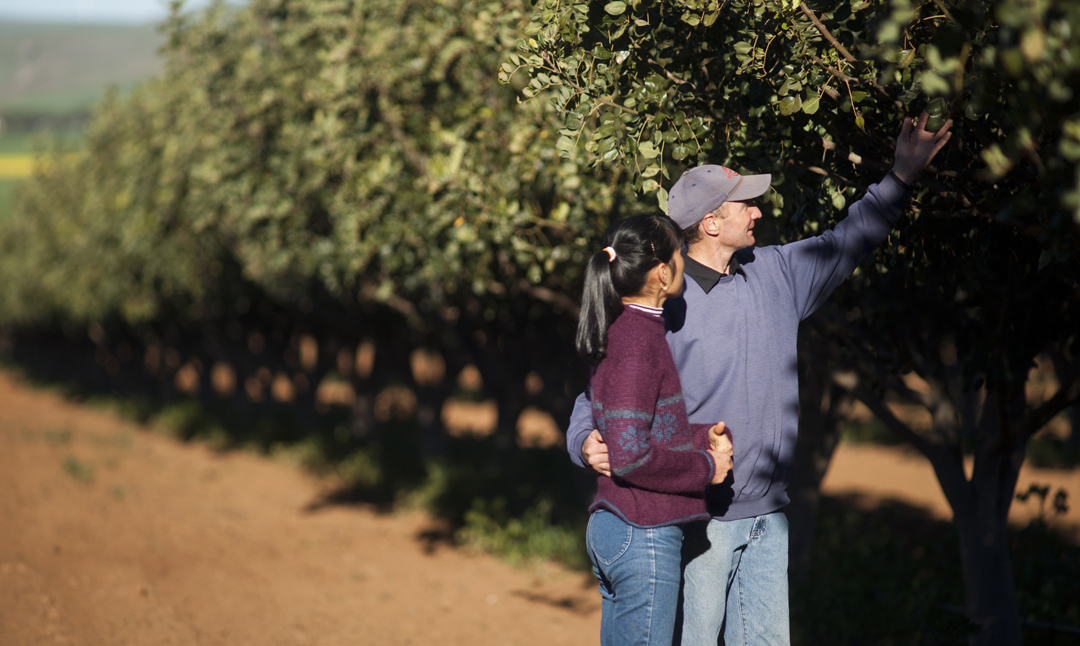 Michael and Jam Jolley at their carob orchard.

Jolley’s orchard near Burra spans more than 30ha and is home to more than 6000 carob trees.

Jolley said his products were processed without any contamination and without any waste, which made them highly regarded in Spain.

“In other places they use machines for almonds, walnuts, pistachios and other things. We grow, harvest, process and package all of our products on the farm,” he said.

“Even in the home country of carobs (Spain), the quality of our South Australian carob is better.”

Carob Kitchen has about 3500 carob trees on a farm at Port Elliot.

Director Sophie Richards said the international carob industry was experiencing strong growth and had been backed by a number of celebrities.

“Our original trees are about 20 years old – we launched at the right place and the right time,” she said.

“The health food industry has played a major part in the growth of our brand with our most successful product being our healthy alternative confectionary with no added sugar. Even Jamie Oliver is on the bandwagon.”

EuroMonitor International estimates the global sale of healthy food products will reach US$1 trillion (A$1.3 trillion) in 2017.

A recent Technavio market research study predicts the global naturally healthy foods market to grow at a compound annual growth rate (CAGR) of more than 6 per cent from 2016 to 2020.

According to Carobs Australia, there are about 400ha of carob orchards around Australia. As a nation, Australia’s potential annual carob production is estimated to be about 1000 tonnes, with each tree producing about 100-200kg of carob pods.

Although this is less than 1 per cent of the global market, Carobs Australia secretary treasurer Henry Esbenshade said the high-quality “clean-and-green” image of foods from Down Under helped drive demand for Aussie carob.

“The high-quality processing and packaging of products sold by the Australian Carob Co and the Carob Kitchen is another important element in improving their competiveness and appeal to international buyers.”