In just under four decades – from February 1978 to March 2016 – the number of men working in part-time positions in South Australia has more than quadrupled.

An InDaily analysis of Australian Bureau of Statistics labour-force trend figures since consistent records began has found men in part-time positions has shot up from 17,700 in February 1978 to 89,500 for March this year – a five-fold increase or twice the rate of women.

Since 1978, the number of women in part-time employment has jumped 2.5 times.

The statistics show that women in 2016 are the most under-utilised group, with 19.2 per cent not employed to their full capacity.

Nationally, the March unemployment rate sits at 5.8 per cent. 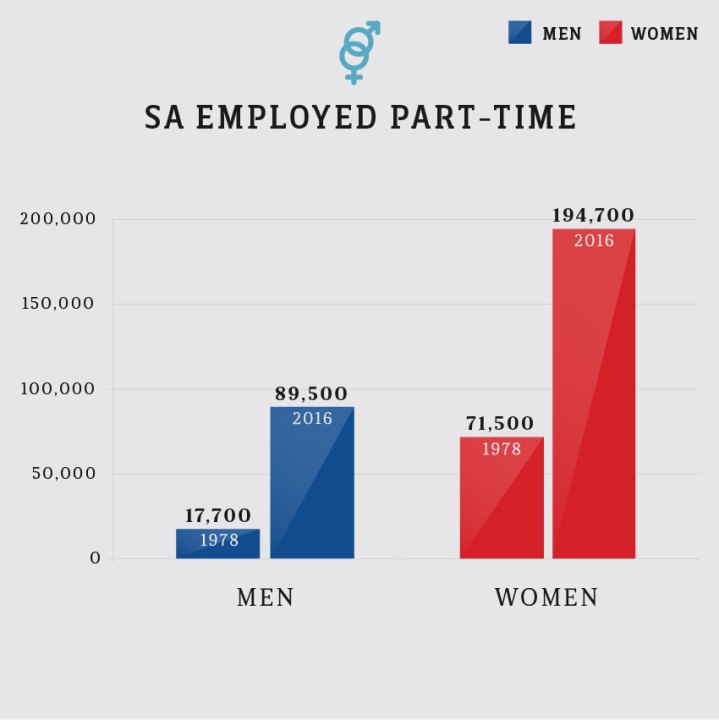 SA unemployment hit double digits in June 1991 and remained over 10 per cent until August 1995.

While part-time work for men has skyrocketed, full-time positions for men have increased by only 4900 jobs over 40 years.

The number of women in the workforce (full time and part time) has almost doubled from 200,400 almost four decades ago to 381,800 registered for March this year.

“If you’ve got one hour of work you’re not unemployed,” he said.

Added McBride: “There are people who desperately want more work to meet their family needs and also the economy’s needs. These are the unemployed and under-employed.

“If they are unemployed and under-employed, they’re going to be conservative with their spending and we’re seeing that in the last few years.

“It is hitting what they spend and that’s going to affect all parts of our economy.

“Large parts of the population are not committing to large purchases such as homes, cars and holidays.”

Womersley said the employment situation was “a good illustration of the transitioning economy, which is impacting on the types of jobs that are available to people”.

McBride said the whole nature of employment had changed in 40 years, driven by a 24-7 economy.

“People have two to three jobs now but there’s been a massive casualisation of the workforce.”

McBride and Womersley said the state and federal governments were too focused on the unemployed and not the under-employed.

“It’s hard to rationalise [the unemployment rate of 7.2 per cent] that it’s just a small bump in the road,” Womersley said.

“The Employment Minister should come out and say what they’re going to do about it. There’s no time to justify and rationalise.

“However you dress it up, it’s a very serious situation.”

“When men hit their 50s they find they’re unemployed; they face years till they can get their age pension.

“The whole business of working used to be into our 50s or even our 70s. You could think about having a job for life, especially men – you were the breadwinner. You worked full time for life.”

How ABS defines Employed, Unemployed and Not In The Labor Force

Employed aged 15 years and over who during the week:

Unemployed is someone aged 15 years and over who was not employed during the reference week, and:

NOT IN THE LABOUR FORCE

All ABS statistics published in this article are trend figures.