Hills’ write-downs and a net profit (after tax) loss of $69 million were reported to the ASX late yesterday.

The SA icon, which is synonymous with its most famous invention, the Hills Hoist, announced the sale of assets to turn around the fortunes of its share price, which has fallen from 99 cents this time last year to 23 cents as at 10.30am (AEDT), bringing the total write-downs over the past three years to close to $300 million.

The alarming half-year results come almost three weeks after the loss of another Hills executive, chief information officer Derek Brown, and believed to be two of his direct reports.

Former CEO Graham Twartz and former executives John Easling and Daniel Edgecombe spoke to InDaily of their frustration at the steady decline of Hills’ value and laid the blame at the feet of the company’s leadership team.

The former employees said the company had descended since the retirement of Bob Hill-Ling in 2005. His daughter, Jennifer Hill-Ling, took over the chairmanship, initially overseeing a bump in performance. However, in the past few years, revenue and the share price have gone into steep decline.

They said that leadership performance, management decisions, loss of long-term “loyal” staff and a departure from “core values” had influenced the dramatic fall of Hills.

Since 2005, the All Ordinaries have risen about 20 per cent while Hill’s value has declined almost 90 per cent.

Last August, after an internal review and more than $90 million of asset write-downs,  Hills posted an $86 million statutory net loss and reported a underlying net profit of $11 million.

Hills share value relative to the All Ordinaries. Image: Commsec

“If I was a shareholder I would be more than unhappy with the performance,” said Edgecombe, Hills general manager of business development from 2009-10.

“It’s not just the comparison to the broader market which raises questions about Hills.

“GUD [Holdings] over the same period has matched the All Ordinaries and other Adelaide-based mainstays like Adelaide Brighton have outperformed the market,” he said.

He said that Hill-Ling, as chairman, and the board must take ultimate responsibility for the company’s performance. 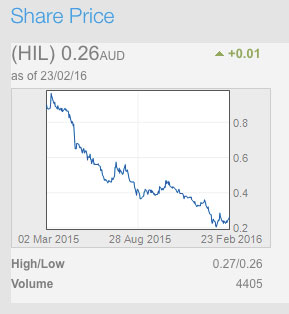 In June 2007, Hills had hit $1 billion in annual revenue and rose to about $1.2 billion within two years.

Its net profit (after tax) performance fell heavily with the company recording its first loss in 2011. Substantial losses followed in 2013 and ’15.

“No board wants to go in that particular direction,” Twartz said.

“It’s not been a success.

“It’s a shame to see the company where it is now.” 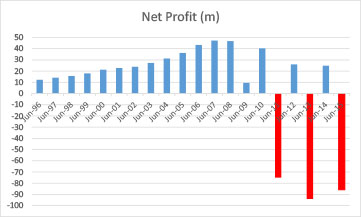 High executive turnover during the past decade, “distractions” and company direction had contributed to the free-fall, the men said.

“In 50 years there were two CEOs, in the past eight years there’ve been four,” Twartz said.

Twartz was the appointed the top job and left in 2012 because “the board wanted to go in a different direction”.

That direction a major restructure and redirection of the company and shifting its focus as a “steel bender” to technology and health products.

Ted Pretty was appointed in 2012 but was replaced “with immediate effect” by chief operating officer Logan last year.

In his first AGM address as CEO, Logan said Hills was no longer a “steel bender” and its main business was technology and health.

“The result was a decline in our service standards and some attrition in our customer base,” Logan said to board members and shareholders two months ago.

“I assure you that we are very, very focused on turning around the fortunes of this company and improving the financial returns.

“Hills is now a very different company to what it was.

“… We are no longer a manufacturer or steel bender, we are now a distribution service business.”

Delivering the FY16 first-half results on Thursday, Logan said Hills had implemented a “back to basics” strategy and restructured its management, business and staff to rebuild the business.

“We believe this new structure will provide greater agility and focus around delivering the value that customers expect,” Logan said.

“The new structure will mean that our customers are immediately dealing with the right sales team to deliver the best solution for them.”

A raft of concerns was raised by the trio and other former employees, who spoke to InDaily spoke to but did not wish to be quoted in this story.

Over the past 10 years, they said, Hills’ decline was due to:

“Despite having outsourced the iconic Hills Hoist to the Chinese [manufacturer] they still couldn’t compete with the Chinese [market],” Edgecombe said.

“Hills didn’t have the marketing pizzazz to sell what was a refreshed product that has enormous cultural resonance with Australians,” he said.

Easling is a former chief of Fielders Roofing Service, majority owned by Hills, and shortly after he was dismissed in 2009 he was sued for almost $72,000 in outstanding costs, which has since been settled.

The men said they were saddened to see the decline of a “world-renowned” company.

“It was built on the entrepreneurial drive of Bob Hill-Ling and that legitimately was continued on by David Simmons but the board apparently lost their way,” Edgecombe said.

“I think you’d struggle to find in Australia anyone over 40 who hasn’t swung on their grandmother’s Hills Hoist,” he said.