An Alinta spokeswoman told InDaily this morning the energy company was contacted by “various companies” when the Leigh Creek coal mine and Port Augusta power stations were earmarked for closure about eight months ago.

“Following the announced closure of Flinders Operations in June 2015, Alinta Energy has fielded a number of inquiries from counterparties regarding the continued operation or alternative use of the Flinders assets,” the spokeswoman said.

“At this stage all discussions remain commercially sensitive and confidential.

“Please be assured that further information will be provided as and when appropriate.”

New owners for the coal mine and the power stations could save some 400 jobs.

Alinta confirmed in October last year that its Flinders Operations would close at the end of March this year. 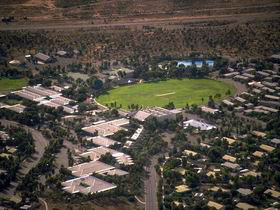 Soon after the confirmation, coal-seam gas producer Leigh Creek Energy Project threw its hat into the ring by expressing interest in obtaining the site.

LCEP told InDaily in October it had plans to build an extraction plant, providing employment for some 500 people during the construction and ramp-up phases.

LCEP chairman Justyn Peters said the old coalmine had the infrastructure, materials and the workforce it had been looking for to start a gas extraction operation.

“We looked at a lot of sites around Australia and everything was here,“ Peters said.

The Alinta spokeswoman said acquisition talks with LCEP had all but stopped since they expressed interest in October.

Leigh Creek coal mine stopped producing in November last year, resulting in the loss of some 240 jobs, and the Port Augusta power stations were scheduled to stop generation “around” March 31.

In January workers at Northern and Playford were told the proposed closure date of March 31 had been pushed out to May 8 this year.

Alinta said the extension was due to larger coal stockpile volumes than anticipated.

The extension of the power station closure sparked concern from union officials who said workers had been mucked about.

“Members may have concerns that this development could have an impact on the timing of redundancy payments or an ability to leave the business for future employment opportunities,” Australian Services Union secretary Joseph Scales told InDaily in January.