The inquiry will examine the environmental, social and economic effects of proposed $1 billion deep-sea oil drilling operation in the Bight, were it to go ahead.

The inquiry narrowly passed the Senate this morning after it was co-sponsored by Greens Senator Robert Simms and independent Senator Nick Xenophon, and supported by the ALP.

Simms told InDaily it would consider the implications of any potential oil spill on the proposed drill site, as well as the project’s likely impact on marine reserves, tourism and commercial fishing in the area.

He said BP’s proposal risked  “jeopardising the future of the Great Australian Bight” and may put the nearby whale population “at serious risk”.

“BP has a terrible environmental record and a record of poor community consultation,” Simms said.

“The community has a right to understand the implications [of the proposed drilling operation].

“I don’t just want the project suspended, I don’t want it to proceed [at all].”

He cited the Deepwater Horizon 2010 oil spill disaster in the Gulf of Mexico as an example of the company’s environmental record.

Nonetheless, the company welcomed the inquiry.

“We welcome scrutiny and look forward to engaging with the committee through this Senate inquiry,” a BP spokesperson told InDaily.

“We will look to explain why we believe the oil and gas industry can operate safely and responsibly in the Great Australian Bight.

“The industry as a whole makes a very important contribution to Australia and provides many social and economic benefits.”

“With proper regulatory oversight, there is no reason a safe, sustainable offshore petroleum industry should not be possible for South Australia, as it has been in Victoria and WA for several decades.

Matthew Dorman – SA and NT Director of the national body representing the oil and gas exploration and production industry, APPEA – said the project could be a significant jobs creator.

“The economic benefits are potentially enormous,” he said in a statement today.

“While it is very early days, success in the Great Australian Bight would attract investment to South Australia and see significant local job creation.” 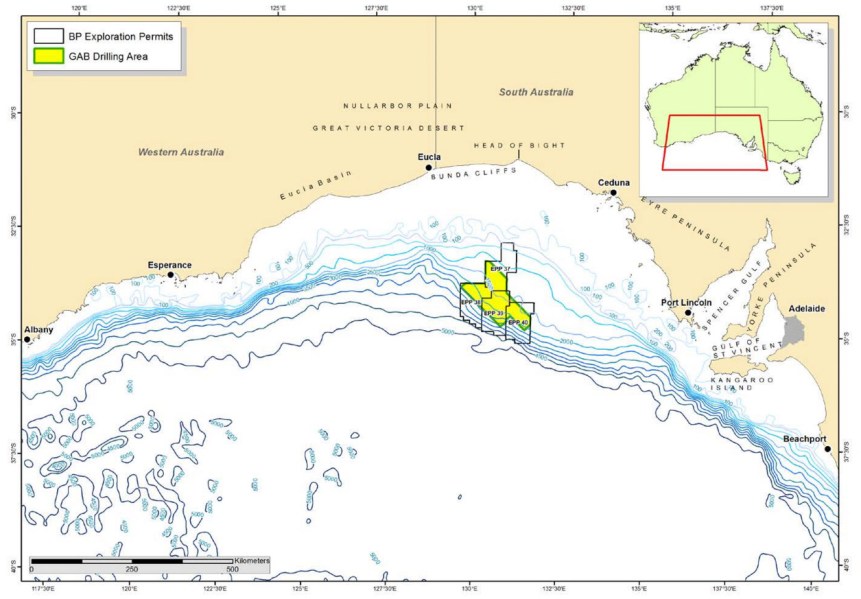 BP plans to drill for oil in an area of ocean approximately 395 km west of Port Lincoln and 340 km southwest of Ceduna in the summer of 2016-2017. Image: NOPSEMA.

BP’s bid to drill in the Bight was suspended last year after the national offshore environmental regulator rejected its plans.

The National Offshore Petroleum Safety and Environmental Management Authority (NOPEMA) said that the corporation would have to modify its environment plan before any drilling would be allowed to go ahead.

Simms said that the inquiry was necessary, even though NOPSEMA would be overseeing the project’s environmental impacts, because there needed to be an “informed debate” about the proposal.

A spokesperson for Family First Senator Bob Day, who opposed the inquiry, told InDaily South Australia needed to be looking for economic opportunities wherever they came from, including in offshore drilling.