The little-publicised Mawson Iron Project in the Braemar Region, 280 kilometres north-east of Adelaide, is an amalgamation of Royal Resources Ltd and Lodestone Equities Pty Ltd. The combined cluster of 10 tenements is estimated to contain four billion tonnes of resource, challenging Olympic Dam as the state’s largest resource reserve.

The proposed $4.8 billion project has about 180-200 square kilometres of strike land and aims to draw first ore from the Razorback mine by quarter three 2020 and ramp up to 100 million tonnes per annum (mtpa) within four years.

The high-grade magnetite ore will be moved in a slurry along a conveyor out to a floating port, five nautical miles off the South Australian coast.

The new kid on the block has also fired a challenge to iron ore’s “Big Three” – BHP Billiton, Rio Tinto and Fortescue Metals Group – that it was moving in on their turf.

“We just went back to square one and looked at every aspect of the mining process and went ‘well, the deposit we’ve got has got great stripping ratio, it’s fairly simple, we can define the ore body quite well’.

“The ore is perfect. The potential is huge.

Mawson mine sits 280 north-east of Adelaide.

“It will rival Olympic Dam – we’ve got potentially the world’s largest magnetite player in the world.

“If we’re lucky enough to do what we say we will be fifth [largest iron ore producer] in the world. BHP, Rio Tinto, FMG … and Magnetite Mines.

“We’re a little company, but we’ve got big ambitions. It’s been done before and we think we can do it again.”

“There will be no FIFO”

Communities skirting the 4500-square kilometre tenure, including Burra, Yunta, Clare, Olary through to the coast near Wallaroo, are expected to financially benefit from Magnetite’s decision to employ a local workforce.

The project is expected to create some 460 jobs and developers have rejected a Fly-In Fly-Out (FIFO) workforce model, opting to chopper in workers based at established regional towns dotted around the mine zone.

Helicopters, similar to aircraft used to take workers out to ocean-based oil rigs, are being proposed to move workers.

“Our operations are within easy driving distance of major urban areas,” England said.

“We will not have the expense of either company towns or Fly-In Fly-Out [workers].

“We’re not going to build a mine camp, everyone will live in houses and live a normal life. That’s the plan.

“In other words, the project will contribute to the positive development and growth of existing socially stable communities,” he said.

New extraction and shipping methods are to be applied to lower costs, reduce transportation time and avoid environmental issues.

The process will see high-grade iron ore fragments mixed with desalinated seawater and turned into slurry and onto a conveyor.

No trucks, a regular sight in mining pits, will be used.

“With or without drivers, trucks are still polluting and expensive,” England said.

Mawson’s OPEX target is a competitive $US29 a tonne, which they aim to achieve by applying new technologies and methods.

Eliminating the need for trucks, England said, could reduce conveying costs to one-eighth of expenditure.

“There’s no handling. The materials just move on a conveyor belt all the way to the sea.

England said a third of the costs would also be taken out by crushing the ore on-site.

About 300km of buried pipeline will transfer the slurry at Mawson to a floating port, five nautical miles off shore near Wallaroo in the Spencer Gulf.

This method is expected to avoid the dust issues that plagued mining communities such as Port Hedland and Newman when operations produced a fine layer of red silt that coated everything, creating tensions with residents and businesses.

The floating port will have the capacity to load the ore onto the world’s largest cargo vessels, the only location in Australia expected to do this.

“When the Premier is talking about innovation, we approach this in the same way the government is approaching where the state needs to be with innovation and technology,” he said.

“They [SA Government] see the future of where we are and they know they can’t just rely on Olympic Dam – they need other avenues.”

Confirming this faith in its potential, the SA Government granted the project state significance status in 2013.

Standing in for the State’s Treasurer Tom Koutsantonis during the parliamentary break, Kyam Maher said in a statement that, although the project had undergone the “most stringent” checks to achieve a state rating, there was more to be done.

“While the South Australian Government is continuing to work with the proponent to progress the Mawson Iron Ore Project, project feasibility studies and a range of applications are still required to be submitted for assessment for both the infrastructure and the mining elements,” Maher said.

“A dedicated case manager is working with the company to guide it through these processes. The company is actively seeking investment funding to progress the feasibility studies for the project through to a bankable stage.

“If successful, this project will create jobs from the port to the mine site, adding a significant boost to South Australia’s regional economy.”

While most of the global attention during the past decade has been on the Pilbara as millions upon millions of tonnes of iron ore was dug out and sent off to China, South Australia has a rich history in mining.

However, that claim has been sorely tested during the past 12 months.

Arrium has been extracting hematite iron ore out of the Middleback Ranges since 2007 to feed the steelworks at Whyalla.

Nearly a decade later, unable to sustain low ore prices, it announced in early 2015 it would shelve its Southern Iron mining operations and slashing 580 jobs.

Later that year some 300 workers and contractors at the steelworks were told they would also lose their jobs to save a further $100 million in a year.

What is the Mawson Iron Project?

The magnetite iron ore deposit was discovered in the early 1900s by Sir Douglas Mawson, at the time a lecturer in mineralogy and petrology at the University of Adelaide, while mapping the geology of the Adelaide Geosyncline in the Barrier Ranges.

The Mawson iron ore deposit is believed to be the largest undeveloped region of magnetite in the world.

It has the capacity to produce 100 million tonnes per year (mtpa) of high-grade, high-quality magnetite concentrate for the global steel industry for more then 50 years.

One of the project’s key selling points is the high grade of the ore which takes less energy to produce into steel. This is appealing to steelmakers who, as the demand for products continues, want to cut emissions to decrease pollution but continue high output.

The company states magnetite iron ore from the deposit has a higher grade of 67.4 per cent Fe (iron) compared to Pilbara grade of 58 per cent Fe.

“We believe that in a world where emission reduction is vital, the simplest way to achieve this in steel making is to use very high grade iron ores and concentrates.

“For steelmakers the simplest and cheapest way to reduce emissions from blast furnace steel making is to use the highest grade iron ore possible – grade is king.”

It seems an odd thing to push the accelerator on an iron ore project as prices for the mineral are tanking.

But England explained, with prices hovering around $US40 a tonne – down from the lofty heights of $US160 a tonne – the time was right for the planning phase to bring on the next generation of Australian iron ore production.

“The iron ore price of today is irrelevant to projects, so irrelevant to the project. The only relevance is it’s difficult to raise capital.

“The pain of everything has actually been a good thing because we can look at ourselves and go where we need to be is the lower quarter of the cost curve.”

Plans for the new mining operations come after iron ore prices have halved due to global oversupply and a slowing Chinese economy.

China demand drove the global supply of iron ore, predominantly sourced from the Pilbara in Western Australia, and Brazil and an oversupply was created as demand eased.

“But this oversupply is only temporary,” England said.

“Current producers in the Pilbara and Brazil will not be able to replace depleting resources of high-quality and or quantity, if at all.”

While the price and demand has dipped, the need for iron ore to produce steel for consumer goods has not waned.

“New mines with high-grade products are essential for the global steel industry.”

Two-thirds of the population, or three billion more middle-class consumers, expect to be urbanised by 2030 and many will be wanting more goods built with steel, such as fridges and other lifestyle products.

“Once you’ve tasted a cold Coopers from a refrigerator you’re not going to go back and drink a warm one out of a box,” England said. 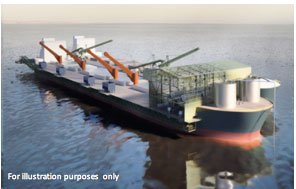