About 2000 sows at a Wasleys piggery and an estimated 10,000 birds at a Hamley Bridge chicken farm have perished in the fire that began at Pinery, racing through properties and killing at least two people on Wednesday.

The damage bill for lost crops alone from the fire is expected to run into the hundreds of millions of dollars.

SA Premier Jay Weatherill said this morning that at least 16 houses, outhouses and farm machinery had been destroyed.

The fire, with a 210-kilometre perimeter, has covered about 85,000 hectares from Pinery, Mallala, Kapunda, Hamley Bridge, Tarlee and northern parts of Nuriootpa with flames heading toward Gawler and the Barossa Valley.

Grain Producers SA chief executive officer Darren Arney told 891 ABC this morning that harvesting was about 50 per cent complete before the fire hit.

Mallala farmer John Lush recalled his close call with the blaze as he parked his vehicle on the edge of the road and watched as the flames passed around him.

“The fire came right around behind me and I only got out by the skin of my teeth,” he told 891 this morning.

“We had no hope … it’s just the intensity of the fire, it was going pretty quick … 10 seconds later it was on fire again.”

Lush said his 44-year-old son had lost everything.

“In fact he’s got my clothes on his back, ‘cos he’s gone none of his own.”

He said insurance assessors had notified him they would attend his property tomorrow.

“Insurance is pretty on the ball.”

SA CFS fire chief Greg Nettleton said at a media conference early this morning that normal fire season had been brought forward up to three weeks in some regional areas due to the high-risk conditions.

“Fifty kilometres in four hours, that’s pretty textbook … it followed what we expected.

“It’s a lot of involved and everyone is working as a team to restore normality as soon as possible.

As of 7am on Thursday, a 56-year-old woman and a 69-year-old man, have died, three people are identified as missing, including one person with 80 per cent burns, and 13 people have been admitted to hospital.

Nettleton said Victorian fire crews were en route to Adelaide and would be housed overnight before heading out to the fire regions to assist more than 300 SA firefighters. 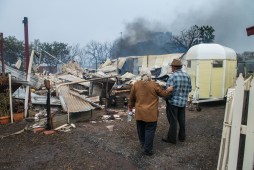 “This is a grim time for many South Australians as well as for many mid-north communities. It’s extremely hard emotionally, physically but also financially,” Reade said.

“We hope to help alleviate any concern they may have with their financial commitments so that they can concentrate on more important issues at hand.”