However, today the workers who keep our pipes running were out in force to protest against changes to their work conditions.

Nearly 100 Allwater workers from the construction, maintenance and recycled water areas marched down to SA Water House in Victoria Square to reject proposed changes that could see them working 16 hour-days with only two days’ break in 19 and rostered days off cut.

“Workers could work 12 days straight at 16 hours a day with no days off,” a United Voice spokeswoman said after the rally.

The union said it could not foresee how the changes in work conditions would impact water services and facilities to customers.

“The workers really rely on these days off to rest and recover – it’s mentally and physically demanding work.”

The 24-hour strike action, supported by United Voice, AMWU, CEPU, CFMEU, was called after five months of negotiations between the unions and management failed to come to an agreement. 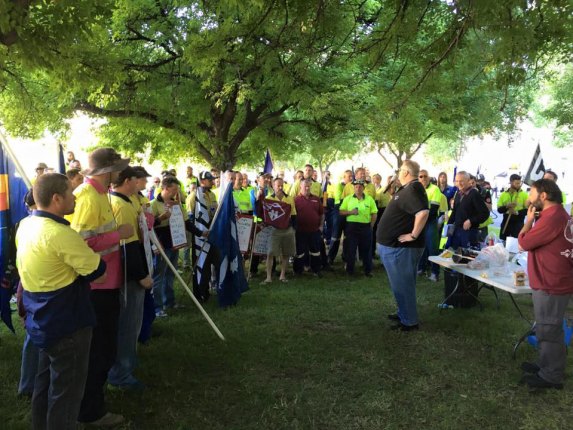 Allwater management said in a statement today it would continue to negotiate “in good faith” and would resume discussions tomorrow.

It said about 40 per cent of its workforce had stopped work and subcontractors had been called in to assist with maintenance.

“If necessary, SA Water staff from other depots and head office will also be available.

“However, this option will only be used as a last resort.

“In the event of a significant incident (health or environmental), all Allwater employees – including those involved in the stop work – will be available to attend in an emergency,” management stated.

Allwater workers on strike said they would attend emergencies at schools, hospitals and other high-care areas but regular maintenance during the stopwork had been outsourced.