This week’s special edition of Media Week looks at the uncomfortable process of selecting images of tragedy for publication.

One of the many horrible realisations about the picture of little Aylan Kurdi lying dead on the beach in Turkey is that it isn’t the most horrible picture to come out of the Syrian crisis.

As terrible as it is to ponder, the photograph of the drowned little boy – dressed western style in a red T-shirt, baggy shorts, tiny shoes, lying on the sand like he’s asleep – has had such a wide impact partly because it isn’t as graphically confronting as so many others.

News editors across the world judged that images of Aylan could be published and we – in the safe, wealthy distance – could bring ourselves to look for long enough to imagine this lost child to be one of our own.

But in yet another example of the failing influence of mainstream media, I would argue it was social media that really pushed this image into the collective consciousness, beyond Europe at least.

Countless Facebook and Twitter users have felt it appropriate to post photos of the poor child’s prone body. They’ve made memes, attached quotes to the photograph, used it as a peg for their own take on the complex refugee crisis unfolding in Europe.

Most newspapers have chosen to run the image of a policeman carrying Aylan, perhaps judging it to be less confronting; on social media, the image of Aylan lying alone on the beach appears to have been shared more widely.

And now, after so many months and years of suffering, we see an outpouring of compassion for the millions displaced by war in the Middle East.

This widespread use of Aylan’s image makes me feel desperately uncomfortable – and not only for the primary reason that it shows a young life lost.

There are other reasons why this is disturbing, including what it says about the selective attention of the wealthy, comfortable world we have the privilege to inhabit.

It seems disrespectful to turn Aylan’s body into an internet meme, no matter the purity of people’s motivations (and I don’t feel comfortable publishing it here, in this context).

But more troubling is that I suspect, with sadness at my own cynicism, that the true power of the image of Aylan is that he looks like a western child, lying on a western beach.

The enormous global reaction might not show the breadth of our compassion but, rather, the limits of it. 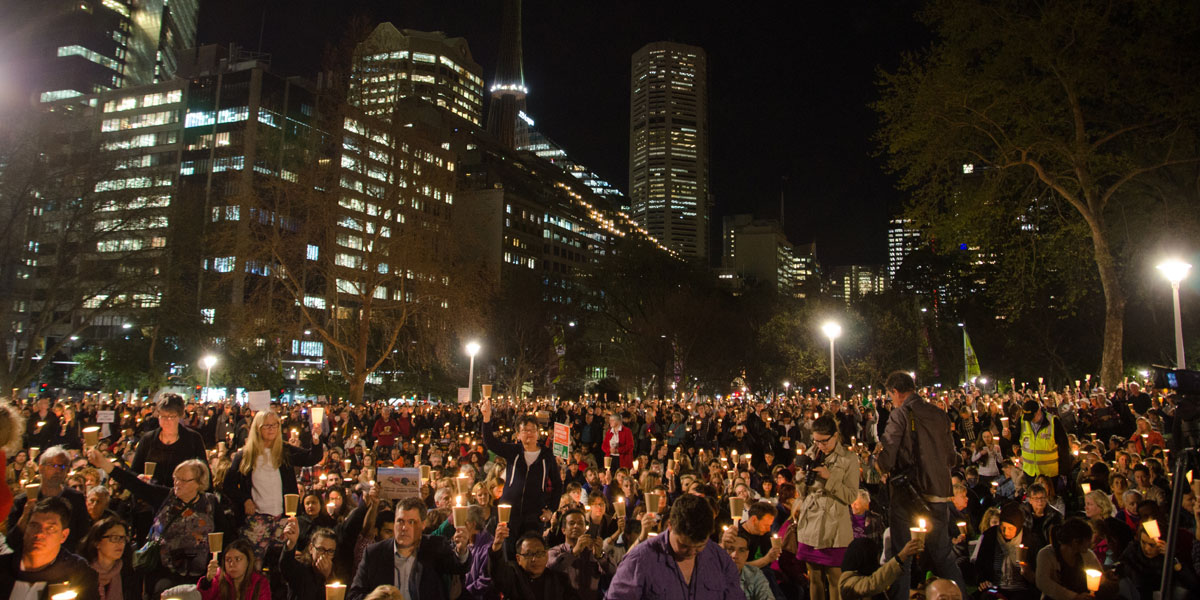 About 10,000 people turned out in Hyde Park in Sydney in a vigil to Aylan Kurdi and other refugees. Image: AAP/NEWZULU/MITCHELL BURKE)

I’ve been editing InDaily since August 2012 and in the ensuing months and years I’ve seen a constant stream of butchery in the file of news photographs from Syria and surrounds.

Hundreds, maybe thousands, of these images have never been published on a mainstream news site because they are just too graphic: rows of young men executed with gun shots to the head, dead little girls with grotesque head wounds, people crushed into pulp under exploded rubble, and image after image of piles of bodies in buildings, on streets, in deserts, on the banks of rivers.

Aylan is one among millions. A precious life, of course. Worth mourning, undeniably. And I hope his death will help to spark more action to address the refugee crisis and its causes.

But why were we not similarly moved by what had gone before? Is it because we couldn’t stomach the images? Is it because editors such as myself would not risk publication of photographs that showed the full horror unfolding?

The butchery in Syria has been grinding on for years, before Islamic State raised its hateful black flag so high in the western consciousness.

One early series of images that I considered in my editorship came through the newswires on 29 January, 2013. We were covering Syria extensively at the time as the civil war’s toll began to climb, but I struggled to find a publishable image to go with the story. I eventually chose an image of a man praying, with bodies – out of focus – in the background – but it wasn’t the photograph that haunted me the most.

The story came from the northern Syrian city of Aleppo. Locals were horrified to discover the bodies of at least 79 young men and boys in the Quweig River.

In the photograph that struck me most powerfully, the bodies are lined up on the edge of what appears to be a drainage channel: there’s a water-filled trench in the middle; formed concrete edges; bodies lined up side-by-side in mud. (I’ve published the image at the bottom of this column, with a warning: it’s very graphic.)

The caption told me that these grey-faced men and children were executed with a single gunshot to the head or neck.

A man stands to one side, looking away from the dreadful scene. His arms are limp at his sides, like an inexperienced actor in the spotlight who doesn’t know what to do with his body. The look on his face is difficult to read.

Other men are walking towards the scene on the edges of the channel, including one man in a crimson jumper. They don’t appear to be arriving in fixed groups – they look like they’re just straggling along.

It’s an image of hope-sucking, dystopian despair: even the colours are leached of life, apart from that single man’s red top, like a strange version of Spielberg’s famous scene in Schindler’s List.

Unlike Aylan, we haven’t attached names and stories to all of these people. We don’t know who loved them, or why they were they were slaughtered. We can’t make any meaning of this. We can’t identify with it.

A few details emerged, but nothing concrete. A newspaper report at the time suggested one of the slain was an intellectually disabled homeless man who slept at bus stops in the area; another was a shopkeeper.

Later work by Human Rights Watch determined that the death toll of the Aleppo executions was around 147, with the victims aged from 11 to 64. Their bodies were found floating down the river from January to March. A full season of death; one among many.

“Based on photographs, video footage, and witness statements, many of the victims bore signs of having been detained and then executed, such as hands tied behind their back, gunshot wounds to their head, and tape across their mouth,” says Human Rights Watch.

According to UK Telegraph reporter Ruth Sherlock, who was in Aleppo at the time: “The big question for these people is why? A lot of the people who were killed were civilians. It’s inexplicable to us as westerners, people here seem to just accept that that’s the way it is now.”

And that statement seems to sum up something appalling and true about the world’s response to this giant, seemingly intractable mess.

For those who even engaged with the crisis, Syria came to be seen as a basket case – so intricately nuanced, so politically complicated, so inexplicable in its horrors, that it became beyond the reach of our compassion.

I’ve seen no memes of the Aleppo dead; no spontaneous candlelight vigils or re-enactments; it didn’t spark renewed public pressure on the Australian government to accept more refugees.

Since 2013 the situation has only worsened for the people of Syria: bloody civil war on one side, the deluded fascists of Islamic State on the other who, by the way, have no trouble getting stage-managed images of their brutality published widely on all forms of media.

Now the dam wall to Europe has broken for Syrian refugees, and Australia this week made the double-handed announcement of an increase to our refugee intake and our involvement in bombing IS positions in Syria.

It is a good thing that some small morsel of meaning, some sliver of improvement, might come from little Aylan’s death.

Still our response feels too simplistic: too hollow; too uncomprehending. Our media attention – both mainstream and social – too superficial.

The slaughter, the deaths of desperate people fleeing chaos, has gone on under the world’s watch for years.

We know because we have the photographs, thousands of them, if we could bear to look.

The way this one image – this one death – has impacted the collective consciousness above others reveals uncomfortable truths about the bounds of our compassion and the limits of our understanding.

The meaning of the photograph and Aylan’s death is already being contested by the likes of Cory Bernardi and Andrew Bolt. For others, it has elicited a simple cry to “do something”.

In other words, I fear that we see only what we want to see.

David Washington is editor of InDaily. Media Week will return in its usual form next Friday.

Scroll down if you wish to view the image described above: Warning – it’s graphic and distressing 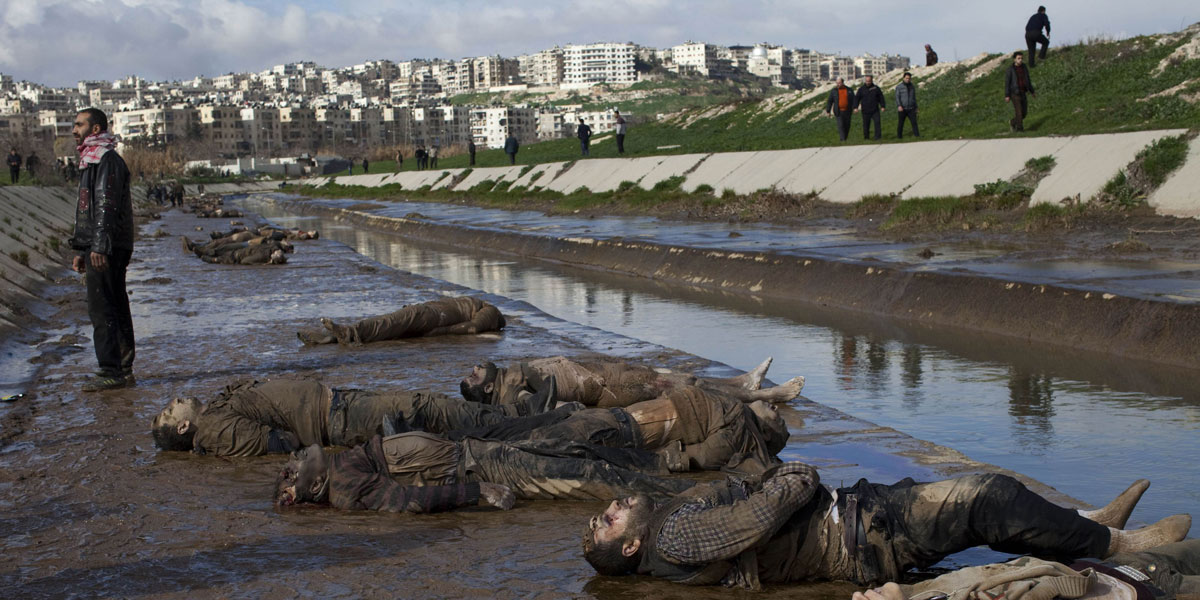