Giving young school students the opportunity to create 3D characters and elements from the natural environment may just spark a long overdue revival of the much neglected subjects of science, technology, engineering and mathematics (STEM).

And that is the goal of an Adelaide-based company, Makers Empire, which has developed an innovative teaching and learning program now being used in the US, Hong Kong, South Korea and Australia.

Inspired by advances in three dimensional printing, the Makers Empire team looked at its potential from a different perspective –  not just as a versatile, state-of-the-art manufacturing device.

Recognising its transformative impact, the team of software writers, designers and teachers decided to see how children as young as five years of age would respond to a technology that will feature prominently in their generation. And they did so by writing software that would give students the opportunity to create 3D characters on an IPad or tablet which could then be printed on a 3D printer.

Makers Empire co-founder and chief technology officer Roland Peddie said the power of the idea became very apparent in North Adelaide Primary School when a group of Year 6 students responded enthusiastically to a pilot program with a prototype in early 2014.

“We knew it would be a fun activity to design some 3D objects but we didn’t know how it would work in the classroom,” Peddie told The Vanguard last week.

“Just seeing the students take to it like nothing else and to watch the excitement as their creations were physically made with a 3D printer was great – there were lightbulbs coming on all around the classroom.

“It was then just a matter from that point onwards of how do we make this more streamlined and more useful in the classroom setting. It was obvious that the core experience was fun and very educational for the students, and was a lot of value for the teachers as well.”

Further development after the pilot led to a program in which students can design in three dimensions in either freehand or with geometric shapes. A compatible file is then exported to a 3D printer and the student can physically handle their creation.

The design software can be applied in any aspect of teaching – from creating leaves and plants in a biology class to reproducing the pyramids of Egypt in a history or architecture class or formulating a string of molecules in a chemistry class.

The software transforms what might be regarded as arcane, intangible concepts to a realistic depiction that can be handled and appreciated.

But Peddie and his Makers Empire colleagues went further in their pursuit of a program that could potentially change the face of teaching. Drawing on the knowledge of experienced teachers both here and overseas, the team developed ‘lesson plans’ to accompany each module of Makers Empire. 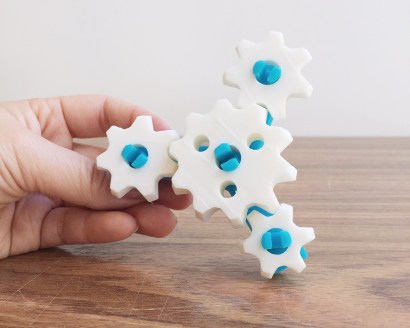 Students can print their 3D creations

A biology lesson plan, for example, involves students researching information about spiders, writing a report, creating and printing a spider in 3D, and then writing a story about spiders – which might be incorporated in an online publication using the 3D representation that the student has created.

As co-founder and chief financial officer Anthony Chhoy explains, students are implicitly picking up a range of skills across a number of disciplines as they work with Makers Empire.

“We are taking a completely different approach to what other software and hardware companies are doing, for us it’s more about the learning outcome,” Chhoy told The Vanguard.

“The 3D printer is just a tool. As a company we are passionate about stimulating the students’ imagination and creativity – that is really the key because it is unlocking all those ideas, transforming them in 3D and printing them out.”

It’s a product and an approach that has seen Makers Empire attract a lot of attention around the world in recent months. The company won a Bronze Medal in the 2015 IMS Global Learning Impact Awards in May, a prestigious international competition, and, at home, was joint SA winner of the Start Up Company of the Year in the highly regarded Australian Information Industry Association’s 2015 iAwards.

“The IMS Global Learning Impact Award is internationally recognised and that really gave us a lot of attention because it‘s a global international education award,” Chhoy said.

“We were 18 months old as a company and competing against a lot of established players with multi-million dollar budgets and came third, that’s not bad.”

Makers Empire’s program is now being used in more than 50 schools in the United States, Hong Kong, South Korea and Australia. The major US market is very attractive to the company and it’s unlikely to be a coincidence that the company’s logo appears to have elements of the Empire State Building in its name and design.

But the company’s focus and motivation is certainly Australian and particularly Adelaide.

“We want to show that it’s possible to have innovation, technology and education coming out of Adelaide,” Chhoy said.

“There is an opportunity for everybody – governments, educators, companies – to really embrace what’s ahead of us right now in the 3D printing revolution.

“And it’s not enough to just have pockets of activity, it’s about building a culture, a new ecosystem. You start with the youngest students – you plant the seed and watch it grow.”