Deadlines are said to focus the mind – and they certainly did for the 200 contestants of the Unleashed Awards.

Run annually for the past three years by the State Government’s Office of Digital Government, competitors were given 46 hours last month to come up with innovative products – such as phone apps, websites and games – using information “mined” from Government databases.

The two winners of the highest accolade, the Premier’s Award, and a raft of category winners were presented with their awards on Friday night with the 47 projects submitted illustrating the broad diversity of ideas and the wealth of data which is now publicly available.

Team XPressioneers developed a web application that can run on mobile, web or desktop entitled NextMove.

The five-person team, all with migrant backgrounds, addressed a common theme among their group – that in arriving here they did not know anything about Australia with which to inform their decision-making about where to live.

As they considered that question in the 46 hour pressure-cooker that is the Unleashed competition, the team realised that the answer would be just as relevant to people already living in Australia and looking to move interstate or, indeed, from one suburb to another within a city. 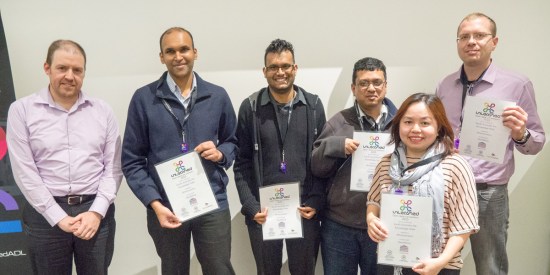 XPressioneers’ team leader Abhi Ramchuritter said his group “went to work on the idea and challenged each other’s thinking until a clear picture of the concept emerged”.

Ramchuritter said the data that could be included in their application included transport statistics, information about schools, property values, and information parks and the natural environment.

“The data the Government has can be put into the system, regions are then sorted and ranked to show a best match with the person’s aspirations and interests, and someone can find the place that suits their lifestyle,” Ramchuritter told The Vanguard.

Some of the data required was not readily available to finalise the project but the XPressioneers developed the concept to such a tangible extent that they convinced the judges.

“We had just enough time to lock in the design concept and show it and sell the idea,” Ramchuritter said.

Team XPressioneers also took the concept a step further with NextMove Pro – an app that companies might use to decide where to locate their next office when expanding into Australia or interstate.

The sort of data that might be at the heart of NextMove Pro could include available infrastructure, vehicle movements and shopping centre locations.

“Companies will pay for this sort of valuable information – that’s the power of this project,” Ramchuritter said.

“The idea behind NextMove and NextMove Pro is to put the power of decision-making into people’s hands.”

Hactory team leader Oshim Somers said the ideas flowed freely within his 10-member team “and we came up with eight ideas that we then distilled down to four entries in 46 hours.

Describing the experience as “an absolute buzz and very invigorating,” Somers said his group was “motivated with the new ideas and the very tight deadlines”.

“All the team dynamics and emotions came into play but the principal philosophy was that we had to have fun. When it became too serious, we turned the throttle back a bit,” Somers told The Vanguard.

“One of our goals was that if we were going to build something, it had to be really worthwhile and had to help South Australia,” he said.

The group’s HomeShare app, which won the Premier’s Award, “acknowledged and recognised that there are a lot of older people who live alone and studies have shown that living by yourself is not an optimal way to live”.

“The statistics also show that one in a 100 people are homeless effectively – young people are looking for safe places to stay.

“We acknowledge that there are lots of people, such as NGOs, looking at programs that physically match people.

“We thought, ‘wouldn’t it be great to actually build a web-based platform that allowed people to match people with places’, a bit like a social dating network but with a lot more safety nets around it’.

“The outcome might be that you have a house with spare rooms and you may want someone to share it with. The person who shares, rather than paying rent, or perhaps a nominal amount, might, for example, mow the lawns, help with the dishes, play scrabble with the owner and show them how to use a bit of IT.

“For a young person, it could be someone coming from the county or overseas to study and with housing so unaffordable, they could stay in a house with someone who may have experience in the things that the student is studying – for example the owner may be a retired teacher or scientist.” 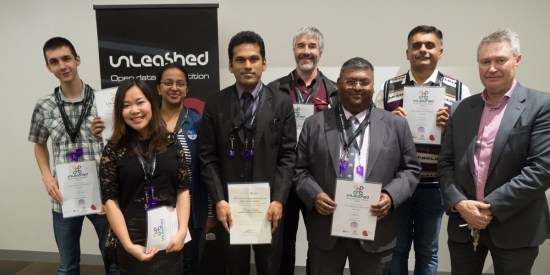 Somers described Hactory’s second project, Just Add Water, as “a platform designed to connect people who have got boats and who live near the water or are a local business that wants to promote its services, with people who want to visit regional areas and go fishing or surfing, for example”.

“Collectively, we love South Australia and we have to turn (the unemployment situation) around. We have to make people more aware of what’s available in regional areas and Just Add Water can do that.”

Commenting more broadly on his team’s success, Somers said “two thirds of our team are new migrants trying to find a start in life and in their careers and are always being told: ‘Sorry but you don’t have local experience, go and work in a chicken factory’”.

“So what we have been able to show is the amazing talent in this team – all we did was use some techniques and harnessed that talent to do some amazing things,” he said.

The two winners of the Premier’s Award each receive $12,500 in prize money and business coaching from the New Venture Institute at Flinders University, Majoran, and Chiliad Consulting to support the further development of their products.

Alysha Thomas, who managed the Unleashed competition, said the goal of the competition was “to unlock the value of open data”.

“A lot of governments hold amazing, valuable data and if we release it to our community, innovative people can create amazing things with it,” Thomas told The Vanguard.

“The competition is an opportunity to connect the digital creators and our young entrepreneurs with the Government to see what they can co-create together to produce great outcomes for the community,” she said.

Thomas said the competitors, ranging from eight years to 58 years of age, had spent the allocated 46 hours in July at the offices of major sponsor Bendigo Bank, where the venue’s innovative design with a large atrium, outdoors areas and breakout spaces had encouraged the collaboration and creativity that underpinned the event’s success.

With the number of participants doubling in the past three years that the event has been held to 200 in 2015, it seems likely even more innovation and entrepreneurism will be unleashed in the future.

The Vanguard is a weekly column highlighting innovation in South Australian businesses.