South Australia’s economic future is in the hands of local businesses – and the new InDaily Business Index will reveal the best of the best.

The inaugural South Australian Business Index, supported by Prescott Securities, the University of South Australia and the Adelaide Convention Centre, isn’t an exercise in shallow boosterism: it’s a ranking based on data.

In October, we will reveal the top 100 companies in South Australia as ranked by research being undertaken by a team of analysts at Prescott Securities.

They are gathering quantitative and qualitative information direct from companies and verifying it via a number of trusted methods, including publicly-published records.

The top-ranking companies will be announced at a special lunch at the Convention Centre in October.

Prescott Securities general manager Andrew Sterzl said that to be included in the list, companies had to be at least 50 per cent owned by South Australians or, for listed companies, they had to have a head office in South Australia.

“We will rank the companies by gross revenue,” he said. ” So the list will include the big contributors to the South Australian economy – the major drivers.”

The analysis will also reveal the state’s biggest employers, and the markets that are feeding the growth of SA companies.

The rankings take into account performance year on year – those companies that have managed particularly rapid growth in revenue and staff.

“The Index will provide some great intelligence about what’s happening in the local economy,” Sterzl said.

“We are all aware there are some South Australian businesses, and indeed large industries, in trouble,” she said.

“But we actually need to focus on the businesses that are doing well and support them in their development and growth.

“Across South Australia there are what I call ‘hidden heroes’ who are doing well. We think it’s just the big businesses that make things run in South Australia, but there are also major areas of growth in medium-sized businesses. We need to focus on their success.”

InDaily editor David Washington said the Index wasn’t an attempt at “good news”, but rather a solid investigation of the companies that are making positive progress in tough economic times.

“Over the next few months, we’ll be looking at these excellent performers and trying to explain how they’ve achieved success in a difficult economic environment,” he said.

“And, of course, rankings are fascinating: I’m very interested to see which local companies are growing the fastest, employing the most people, and making an impact in their markets.”

Read Business Insight every week for more details about the Index – including how you can secure your table at the presentation lunch in October. For more information on attending this event, please call 8224 1622. 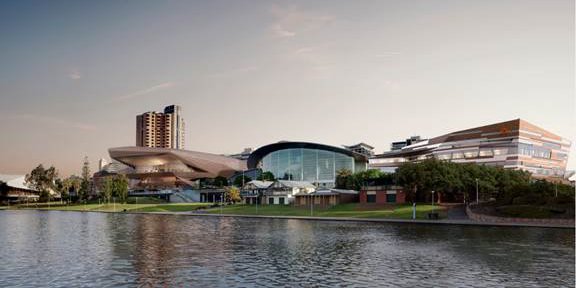 The Convention Centre will host the SA Business Index presentation lunch in October.