The Federal Government has moved to address the vexed issue of country of origin food labelling, releasing for public discussion a series of graphic designs to depict the extent, or otherwise, of Australian content and processing.

Minister for Industry and Science Ian Macfarlane said “consumers have told us loud and clear that they want more useful food labelling, and now we want to hear from them about which options they prefer”.

“Based on our consultation sessions in major capital and regional cities, we have valuable industry information on how we can implement a system that is fair and transparent for consumers without adding extra costs to business,” he said.

The Government has included six ‘ideas’ in its online consultation which include variations on the Australian Made theme. 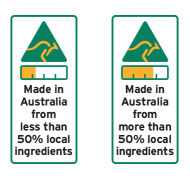 Macfarlane flagged his preference on radio earlier this week.

“I favour the green triangle with the yellow kangaroo in that it’s already well known and it’s owned by the Government and on that basis, it’s not able to be copied,” Macfarlane said.

Rick Cairney, director of policy at Business SA – which has a number of food producers within its membership – said the peak business body was supportive of greater clarity in country of origin labelling.

“We would welcome consumers having the ability to see clearly where the contents and processing of our food products occurs because Australia has high quality food and many people want to support local producers,” Cairney said.

“We look forward to the Federal Government being able to achieve this goal without placing undue compliance costs on local producers,” he said.

Macfarlane told ABC radio this week: “We are very mindful that this will add a cost to manufacturing in Australia but consumers are saying they are prepared to pay that cost, which is very small.”

Food labelling has long been a frustrating issue for consumers with a series of ambiguous and often misleading descriptions being used to describe the source of contents and processing.

Earlier this year Minister for Agriculture Barnaby Joyce said he had received “in the order of 26,000 emails and about 150 personally written letters asking us to make improvements to country of origin labelling”.