Today, we ask if the media industry is celebrating or selling the Anzac centenary, the ABC’s 7.30 is trampled by the footy and News Corp comes after your cheap Netflix.

Media Week is a big fan of the Barossa. Be Consumed. ad campaign.

But even this column baulked at the use of a decontextualised image from the ad on the landing page of the state’s number one tourism website – the SATC’s southaustralia.com – this week.

Let’s just say, it may play into certain unsavoury stereotypes of South Australia.

If you’re not familiar with the ad, what would you make of this? 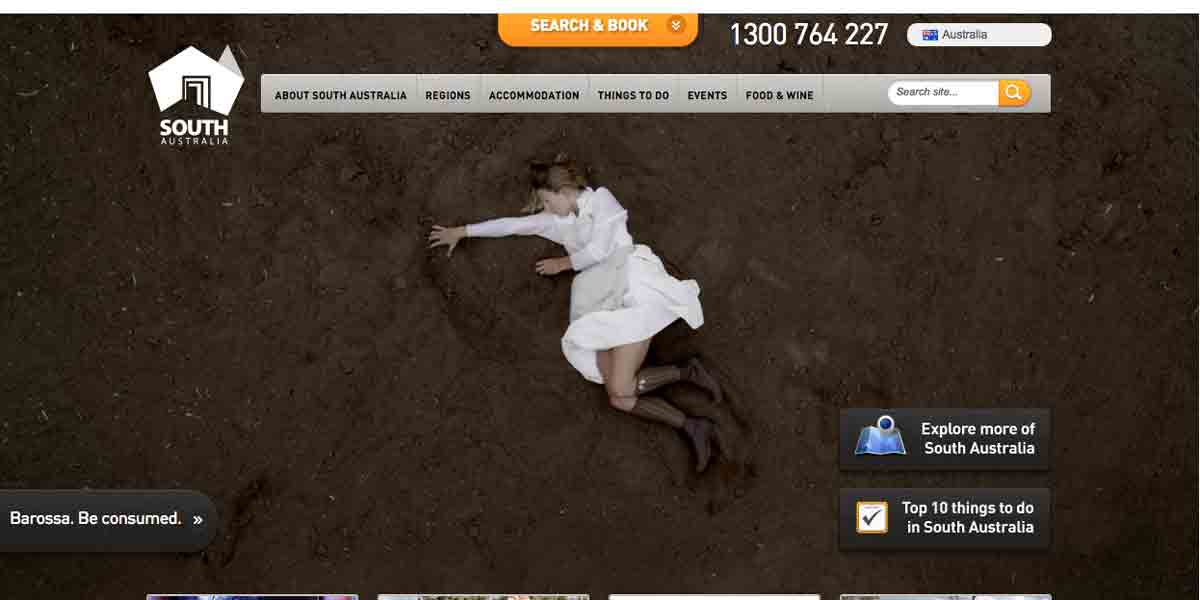 This image greeted people who logged into southaustralia.com this week.

When the ABC’s eastern states management decided to do away with local editions of 7.30, one of the reasons offered was allegedly soft ratings.

Already this year there has been debate about the comparable ratings, with some analyses suggesting the national program is lagging behind the performance of the local shows a year ago.

Whatever the reality, last Thursday ABC management got a taste of how tough it might be for a national current affairs show when it comes up against the AFL in a town like Adelaide.

The comparison to Friday night football isn’t completely clear – given last Thursday was the opening night of the AFL season and preceded the four-day weekend – but the 7.30 program was squashed in the ratings by Seven’s footy broadcast. Like a gnat.

The Friday night edition of 7.30 SA would hit the low 40k mark only on a particularly bad night.

Now they want your Netflix

First they came for your free-to-air sport, now they’re after your cheap Netflix.

News Corp, as reported in this column previously, is pushing Communications Minister Malcolm Turnbull to reduce the so-called anti-siphoning list of sports that must be shown on free-to-air television, in order to boost the commercial hand of Foxtel (half owned by News Corp).

This week the Murdoch fun police started pushing for increases in the cost of Netflix – the American streaming video provider that’s been operating in Australia for just a couple of weeks.

News Corp boss Julian Clarke, appearing before a Senate inquiry into corporate tax avoidance (yep), took aim at Netflix, saying it had been able to price itself at $8.99 a month – at least $1 cheaper than rivals – because it doesn’t pay GST.

“We would be looking to Parliament to fix that problem,” said Clarke.

News Corp has skin in this game – of course. Foxtel is a partner in the Presto video streaming service – a rival to Netflix.

The very next day, Treasurer Joe Hockey announced he had reached agreement with state and territory treasures to extend the GST to the cost of overseas sourced “intangible” services like Netflix.

This was a fast turnaround, even by News Corp’s lobbying standards. (Choice has already pointed out there may be a loophole in the plan.)

The centenary of the Anzac landing at Gallipoli is a huge media event that warrants thoughtful and sustained media coverage.

But does it need to be commercialised quite so blatantly?

The sale of the Anzac spirit started in earnest in 2011, when VB launched its “raise a glass” campaign. To be fair, it was a nicely done piece of advertising, but the whole concept of using Anzac Day to market beer – even indirectly – was always in marginal taste.

This year, the 100th anniversary has sparked a flurry of attempts to cash in – and the media industry is leveraging the Anzac spirit as enthusiastically as any other.

Rupert Murdoch’s News Corp has been particularly active (Murdoch’s father Keith made his name with a censor-busting brief stint as a correspondent in Gallipoli). At the moment, News Corp is hocking commemorative Anzac coins, which it seems you can only purchase if you buy a Murdoch paper.

Most of the commercial entities have the sense to also throw in some fundraising for Legacy and other veterans’ charities. But the fact remains that the Anzac image is being used for (at the very least) indirect marketing benefit.

Murdoch’s coins are one of the commercial endeavours documented by the Tumblr page, Poppies for Profit (pointed out yesterday by our friends at Crikey).

It’s quite a list, possibly headlined by the Greater Western Sydney Giant’s purloining of an iconic image of a digger in a slouch hat.

The best of the local media has come to the fore in sustained coverage of the terrible case of Chloe Valentine. Many of the state’s court reporters have done a wonderful job reporting the distressing case and what it reveals about our broken child protection system.

Recognition is also due to the Coroner Mark Johns, who handed down his findings in the case yesterday. He has been open and helpful to journalists – even allowing the statement of his findings to be filmed.

His media-friendly approach was explained in this piece, published by InDaily last year.

He said: “We’ve got no power to require that our recommendations are implemented and I’m not saying that I think we should have such a power either. The force of what we find and what we recommend is in the public reaction to it, and the public only knows about it generally through the media.”