A medium-sized food producer in South Australia has today announced the sale of a substantial share of its business to a Chinese agri-investor in a deal that trades on the state’s “safe and clean” reputation.

Pendleton Estate is an integrated food producer specialising in extra virgin olive oil and cooking oils. The company was established in 2006 and owns a substantial holding of olive groves at Keith in the South East which packs, distributes and exports it product from Stepney.

The company says the deal gives it a “substantial” cash injection, as well as greater access to Chinese markets. The local investors retain the majority share in the business.

Pendleton Estate managing director Grant Wylie told InDaily “it’s a win-win for both Pendleton and the investor – we get increased sales opportunities in China and the investor obtains safe, healthy, quality product to supply to the Chinese consumer”.

“We’ve been selling into China for eight years continually with business growth – we recognised early on that there was a lot of potential up there.”

Wylie says the company employs 10 staff including part timers, but it will start the process of recruiting more staff very soon.

He says the Australian Business Innovation and Investment Programme, which encourages overseas business people to settle in Australia and use their skills to develop business activity here, helped to generate export interest in the company. 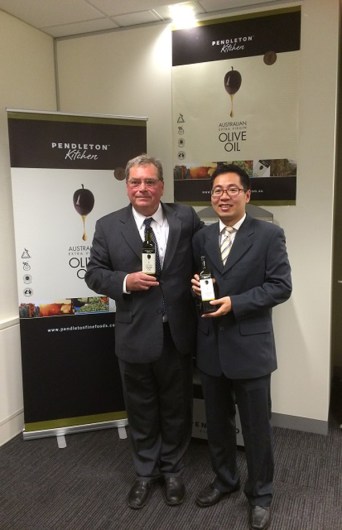 “We started getting inquiries from people who had business relationships back in China who wanted olive oil, so our exports started to increase to China.

“We also started doing trips to China and attending trade shows, which were mainly facilitated through FoodSA.”

While businesses such as Beerenberg, Robern Menz and Haighs are larger in size, Wylie says that Pendleton Estate was one of the first to sell finished product in to China.

“Ten to 15 years ago the Chinese government made a decision to direct water to industry rather than for the growing of food which made me think there would be a good market for supplying food in the future because if there’s less water for irrigation, then the ability to produce food would be diminished – well that future is arriving now.

“We are currently exporting over one to two containers of extra virgin olive oil to China and it is growing exponentially each year.”

“In the last three years food producers in China have had extremely bad publicity – the blueberries, baby formula and gutter oil scandals have all had an effect resulting in the Chinese having trouble trusting the food quality of their own suppliers.

“The Chinese consumer is  looking for safe and natural food and to them the Australian brand represents a safe, quality brand to buy.

“Wanting to meet this increasing demand in China we needed to take on an outside investor because since the GFC the banks are very conservative in lending finance to small to medium businesses.”

It was through Austrade that the Chinese investor, who is also involved in agribusiness, approached Pendleton Estate.

Wylie would not name the investor.

“After lengthy negotiations, we found we shared a common philosophy of wanting to produce and market safe quality food.”

The investment deal means that Pendleton Estate will receive a substantial cash injection as well as increased sales opportunities in China. Management will be kept in Australia.

“I have no problem with Chinese investment, the Chinese have been very active in taking shares in wineries and vineyards because of wine growth into China, but I don’t know of any other South Australian food companies where they’ve taken an investment into an integrated agribusiness model (growing, producing, distributing, marketing).

“My view is that Chinese investment is good because we’re not selling at the farm gate, we’re adding value then selling on to China, which is what the wine industry does and which means jobs for more South Australians. We’ve been following the wine industry’s model.

“Part of the investment equity means that we can now more effectively compete against imported product price through economies of scale giving us reduced costs.”

Wylie believes there are rapidly increasing opportunities for Australian producers to export any natural Australian food products into China.

“The Chinese are proactive about their health. They want to eat safe food for their health, which is why they take Australia olive oil and red wine – they’ve heard it’s very good for them.”