Welcome to the second edition of InDaily’s new weekly column – Media Week – in which we’ll explore everything to do with the news business, advertising, PR and marketing in South Australia and further afield.

Today, the RAA rolls out its post-George advertising campaign, a closer look at the radio ratings, more bad news for print newspaper and who’s in the naughty corner this week?

After 11 years, one of Australia’s longest-running ad sequences has come to a close, with the RAA finally moving on from the comic misadventures of comedian George Kapiniaris (“Trevor! Where’s the trust!”).

The South Australian motoring giant has unveiled the first in a new series of ads by local agency kwp! that will show off the broad range of services offered by the RAA – not just the breakdown and insurance services.

The first ad, starring actor and vigneron Mark Saturno, hit the screens this week – and it’s a kind of Willy Wonka affair (see full ad below).

The extras are all RAA staff and members, recruited by a call-out to members a month before filming.

The RAA has timed the commercial to coincide with changes to RAA membership, which broadens membership benefits to anyone who holds an annuity product with the organisation (insurance, security monitoring or road service).

Speaking of kwp!, the agency’s Barossa ad has picked up another accolade. Creative director James Rickard has written for us today about the wild ride of producing the ad, coping with the critics, and its subsequent success.

The Australian’s head office in Sydney must have a dim view of the relevance of South Australia.

After losing its award-winning reporter Sarah Martin to Canberra, the local bureau remains under-staffed with just two journalists on deck.

Meredith Booth and Verity Edwards are holding the fort while bureau chief Michael Owen is on holidays and Mark Schliebs (transferred to Brisbane) remains unreplaced.

Word is that the best Adelaide can hope for to replace Schliebs and Martin is a trainee, due in December.

With one sixth of the continent to cover and some major national issues being played out, The Oz seems to be a bit off the pace.

Radio ratings out this week showed a continued modest performance by SAFM which was rebadged in the midst of the ratings period as hit107.

However, station owner Southern Cross Austereo is relaxed, given the ratings books were only rebadged as hit at the tail-end of the ratings period.

They also have some other indications that the revamp of Adelaide’s original commercial FM station has had an impact.

Nielsen online ratings for October showed hit was Adelaide’s top online radio station – and SCA say they’ve seen significant digital growth since the relaunch. SCA also reckons their Facebook page – as of 1 November – had the highest level of engagement and the most fans of any Adelaide radio station.

The next ratings survey – due out on 15 December – will be watched very closely (and nervously), especially by new hit breakfast team Amos and Dani. 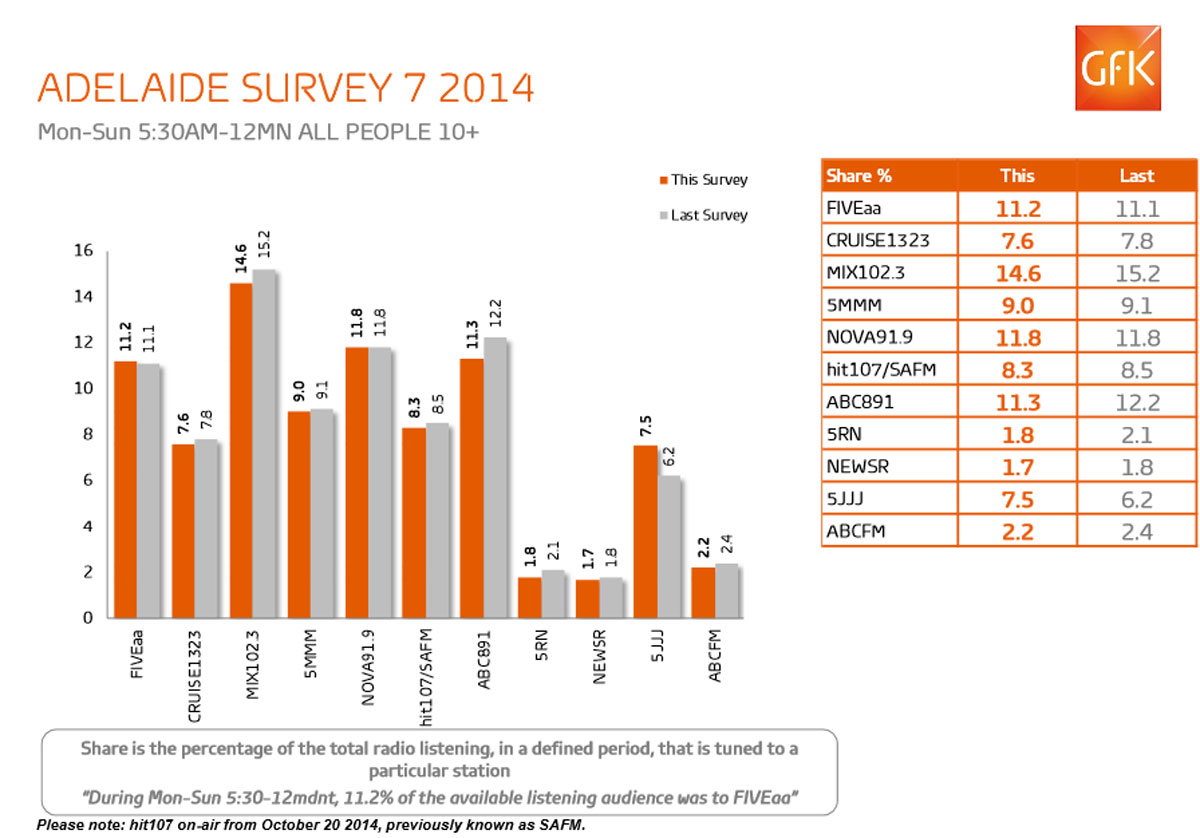 Watch out for new additions to the SA Life television presenting team in 2015.

Producer Traci Ayris is looking at a number of options to bolster the on-air team, including some very well-known faces.

We hear some of the hopefuls are already working in television elsewhere, one is the son of a local well-known face, and Adelaide stage and theatre identities are also in the mix.

The Channel 7 spin-off from the Adelaide magazine lost presenter Peter Michell this year after his sudden death from a heart attack.

Broadhead was determined to finish the famous race in under 4 hours.

Soda, quite a fit specimen, has run faster than that, but kept pace with his friend.

Fresh 92.7, InDaily’s neighbour in the East End, won the gong for best station promotion, sponsorhip or fundraising campaign for TransMISSION – a month-long initiative to raise $88,000 for broadcasting equipment. We’re told it was the most successful campaign in the station’s 16-year history.

Three D Radio was recognised for excellence in technical/IT services, particularly technical team members Mark Farley, Ian Moore and Glen Donhardt, who were integral to the success of the station’s move to new premises and the construction of new studios.

Year on year, the June to September figures show huge falls in print sales across the country – double-digit in some cases.

The Sunday Mail suffered a similar drop of 8.9 per cent, year on year.

Interstate, newspapers are enjoying increases in digital subscriptions to compensate, at least in part, for the decline in print sales.

However, we can’t provide the local picture as the Tiser doesn’t publish its digital subscription information.

The naughty corner is where we highlight the biggest media sinners of the week.

Today, we’ve had to move out the furniture and re-model given the number of transgressions plaguing the media world this week, from Murdoch tabloids attempting to rekindle the Cold War, to so-called journalists fussing over a minor celebrity’s oiled bottom.

However, we like to keep things closer to home.

So the runner-up in this week’s media naughty corner is Premier Jay Weatherill, who used his Twitter account this week to congratulate Adelaide Uni on its appointment of former Governor Kevin Scarce as Chancellor.

At least, that’s what he was attempting to do – but the image he left was of Scarce strangling a pixie:

“Tremendous appointment by Adelaide uni – former gov scarce has a tremendous grasp of the imp of unis.”

The winner is The Advertiser which has been having a lot of trouble keeping embargoes lately.

First, according to our friends at Crikey, they broke the embargo on their own food awards by a couple of days. They stopped the presses when the mistake was realised, but not before the winners were revealed in some regional copies.

It happened again last Friday when the Tiser prematurely published the winners of the SA Tourism Awards with the heading: “Awards show SA tourism’s really motoring along”.

They quickly attempted to correct the error, but, alas, the internet doesn’t allow such mistakes to be easily erased. Thus, anyone who Googles the SA Tourism Awards can get a sneak peak of the inaugural winner of the taxi driver of the year category.

The tourism industry’s night of nights is on tonight.

Media Week will appear in InDaily every Friday.