South Australia is a willing investor and guarantor for the $350 million transformation of Nyrstar’s lead smelter in Port Pirie, the State Government says.

Treasurer Tom Koutsantonis told ABC radio today the state had “acted like a bank” and engaged private analysts to examine the proposed Transformation Project announced by Nyrstar two years ago.

The project aims to change the 125 year old lead smelter into a state-of-the-art poly-metallic processing and recovery facility that uses a technology called “bath smelting”.

“All the advice says we (should invest) and it’s a good deal,” Koutsantonis said.

“This is a plant that will be profitable; it is technology that works and operates in 25 other countries.

“We’re behaving as a guarantor, giving Nyrstar the ability to go to the market and raise capital.”

Nyrstar announced yesterday from its head office in Belgium that its board had approved the $350 million redevelopment of its smelter at Port Pirie, with the State Government agreeing to give full support for contingent liabilities, estimated at $315 million.

It followed completion of a final feasibility study for the proposed redevelopment of the smelter into an advanced metals recovery and refining facility.

“Subject to finalisation of all agreements relating to the funding and support package, the Nyrstar Board has approved the redevelopment,” the announcement said.

The company said that on 29 April 2014, “Nyrstar was informed by the South Australian Government that final Cabinet approval has been obtained to provide contingent support for the full amount of the third party funding”.

“Nyrstar and the South Australian Government are in advanced stages of finalising the agreements providing for this critical element of the proposed redevelopment,” it said.

It’s at that time that the exact detail of taxpayer’s exposure to the financial elements of this deal will be confirmed.

Koutsantonis sees the deal as a key part of the state’s economic future.

“We’re in the business of growing South Australia’s economy.

“I can’t imagine them leaving,” he said of Nyrstar’s commitment to the state.

The smelter is located on the eastern shore of the Upper Spencer Gulf in South Australia, approximately 230km north of Adelaide.

Built in the earliest days of the state’s first minerals boom in 1889, it has been in constant operation ever since.

It was based at Port Pirie to take advantage of a dedicated port facility where concentrates are received, with final products dispatched by road and rail.

In the modern era it has developed a crucial link to another smelter in Hobart – perhaps one of the reasons Nyrstar has committed to keeping Port Pirie open.

The Hobart zinc smelter produces by-products such as paragoethite and leach products that it is unable to process on site – Port Pirie is the only nearby place that can process those products so the viability of the operation is locked into the other.

The transformed facility will continue to produce the current range of metals including zinc, gold, silver, copper and lead, hopefully more efficiently.

The new technology (bath smelting) will allow a wider range of raw materials to be processed, moving toward recycling solutions such as end of life consumer electronics, the company says.

“These materials are rich in precious and exotic metals such as gold, silver, germanium, indium and tellurium, among others.

“Currently Australia has no facility to process and recover the valuable metals in this growing waste stream; the transformed Port Pirie facility will have the process capability to meet this need.”

It’s not an easy business to be in.

Nyrstar was floated as a public company just seven years ago.

The smelter used to be operated by a company called Zinifex.

Zinifex itself had been spun out of the failure of zinc miner Pasminco, which went under in September 2001.

Zinifex was left with a large open cut zinc lead and silver mine in north western Queensland, a medium-sized underground zinc, lead, silver, gold and copper mine located on the west coast of Tasmania, the Port Pirie Smelter, a half share of Australian Refined Alloys, an acid battery and lead recycling business and Clarksville Smelter, a modern operation in the USA.

In December 2006, Zinifex announced it would merge its smelting operations with those of Umicore, a Belgian materials technology company, with the intent of eventually floating the new company Nyrstar.

This left Zinifex carved off as purely a mining company and Nyrstar was floated in October 2007 as a zinc smelting and alloying operation.

It listed on the Euronext Brussels Stock Exchange.

“Whilst we are a relatively young company, most of our operations have long operating histories under previous owners and operators,” the company says.

“Since 2009, we have been undergoing a significant strategic transformation by expanding upstream into mining both to secure raw material supply for our smelters and to gain exposure to the more profitable part of the zinc value chain (zinc mining being historically more profitable than zinc smelting).”

One of the Port Pirie smelter’s drawbacks has been the high levels of lead it discharges into the atmosphere around the town.

The smelter’s various owners over the years have taken actions to bring it down to safe levels, but the most recent data shows this has not been achieved.

The transformation is the latest attempt to reduce lead levels in Port Pirie.

There is also a political edge to this deal.

The State Government’s agreement with Nyrstar follows its agreement with Port Pirie-based independent MP Geoff Brock to take on contingent liabilities related to the cost of the project.

Brock and Premier Jay Weatherill told ABC Radio in late March that the deal for the independent to support a minority Labor Government included a commitment to further indemnify the Nyrstar project, should other proposed arrangements fall over.

Up until that time, it had been expected that the Federal Government would commit $150 million in underwriting, given the importance of the project to both SA and Tasmania.

“Jay Weatherill has given me an undertaking that if that’s not successful it’ll be funded through the State Government,” Brock said at the time.

With the state jumping the gun, the Federal Government stepped aside.

In the 2013-14 State Budget papers of last June, State Government exposure in the complex deal had been estimated at $115 million.

That figure now rises to $265 million.

The transformation project is a last ditch bid to keep the business profitable and environmentally acceptable – so the State Government has plenty of skin in the game.

Open or closed, the state is exposed.

Back in Adelaide, meanwhile, the State Government is keeping an eye on another environmental stinker.

Chemicals manufacturer Penrice Soda has been operating a processing plant at Osborne since 1935.

The company went into administration on April 11.

If it goes under, responsibility for the massive remediation of that site will surely fall back on the taxpayer. 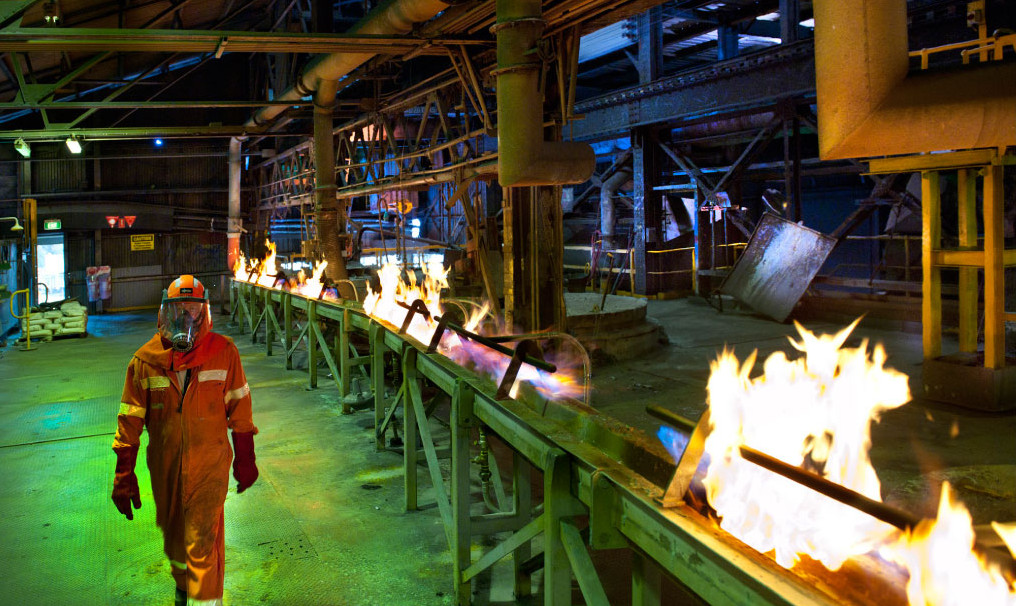 Inside the Port Pirie smelter