Unemployment amongst professional geoscientists in Australia has leapt as the shine comes off the mining boom.

A survey by the Australian Institute of Geoscientists (AIG) an unemployment rate of 18.7 per cent among Australia’s geoscientists, geologists and geophysicists.

The geo-professionals had been working in fields ranging from resources exploration to environmental remediation, groundwater resource management, teaching and research.

“A further 14.8 per were underemployed: unable to secure their desired level of employment,” the AIG report, released today, said.

“The combined unemployment and underemployment rate exceeds the level recorded at the peak of the global financial crisis in 2009 and represent a dramatic decline since employment levels peaked in December 2011.”

The report said a quarter of unemployed and underemployed respondents were seeking alternate employment outside the geoscience professions until conditions improve, while around nine per cent were looking to leave the profession permanently.

“Some 46 per cent of the unemployed and underemployed respondents saw little prospect of returning to work as geoscientists in the next 12 months,” it said.

“The survey results showed that unemployment is affecting geoscientists at all levels of experience, from new graduates to professionals with more than 30 years experience in their field.”

“The extent of unemployment being experienced by Australian geoscientists defies the strategic importance of the resource industries to Australia’s economy,” Camuti said.

“Exploration is crucial to the sustainability of our resource industries.

“Cyclicity in geoscience employment has always been a feature of the industry, with exploration activity ebbing and flowing in line with trends in investment, but the extreme cyclicity currently being experienced in Australia is damaging the underlying productivity of our mineral resources industries and contributing to the erosion of Australia’s geoscience skills base,” she said.

“A mineral discovery now takes between 8 and 13 years to become a new mine that provides employment during construction and operations, both directly and more broadly through a multiplier effect, which is longer than the length between the employment troughs experienced by the sector.

“Each time a project is suspended, geological knowledge is lost which has a serious impact on productivity.” 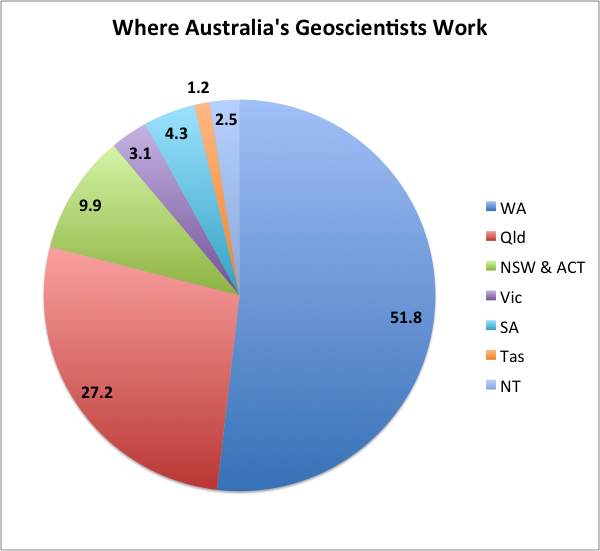