South Australia’s economy is facing a crisis, weighed down by state debt, poor infrastructure and the inevitable closure of the car industry, says the head of the state’s largest industry group.

In a withering assessment of the state’s fortunes in front of a national audience in Adelaide last night, Business SA chief executive Nigel McBride said SA was at an economic crossroads after missing a range of opportunities.

He said it might be too late for SA to catch up on infrastructure and questioned why anyone would set up business here, given our high cost structure.

“Victoria and SA are carrying the can for this; we know Ford is closing and we think (Holden boss) Mike Devereux is playing a game here and thinking when he will close Holden and not if,” McBride told the Australian Pipeline Industry Association (APIA) dinner at the Hilton.

APIA’s national board had met earlier in the day and 120 industry representatives from Australasia’s pipeline infrastructure industry were at the dinner.

“We are at the crossroads and it’s not working for us,” McBride said.

“Olympic Dam’s expansion was over-blown and then missed.

“That window of opportunity has been missed.

“We should already have that deep water port in the Upper Spencer Gulf.

“We should have that power line going down the Eyre Peninsula.

“We should have the energy and water, the road and rail.

“We are billions of dollars of catch-up behind and we are running out of time. In fact we may have run out of time to catch up.” 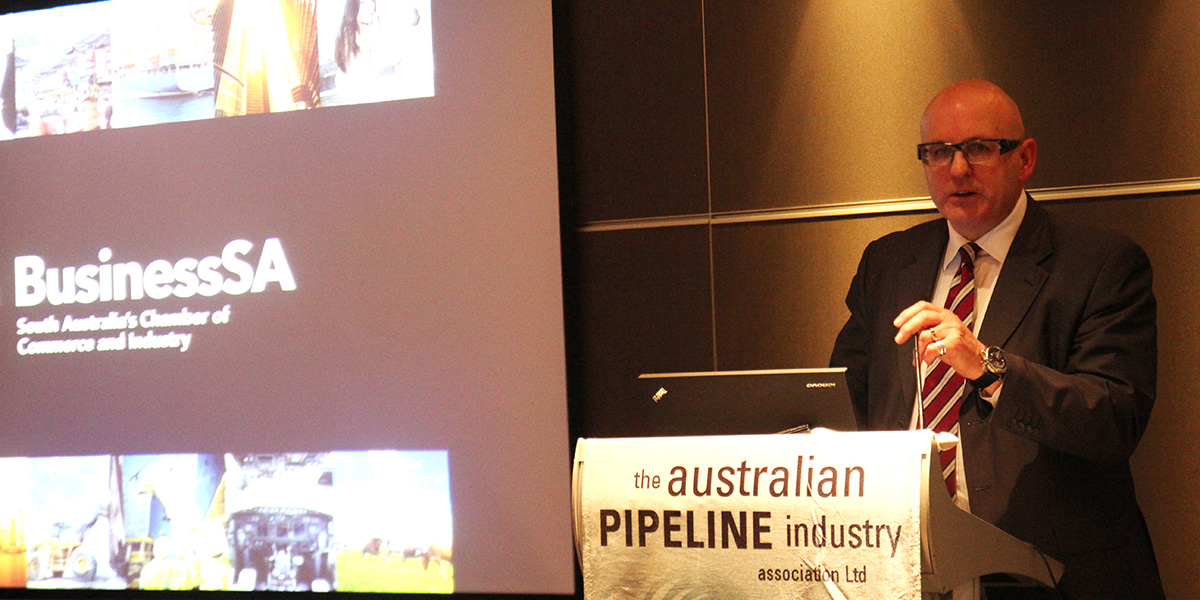 The BusinessSA head had a gloomy view of the state’s manufacturing prospects, especially the automotive sector.

Referring to federal Labor’s FBT policy, he added: “They haven’t even put it in place and already we’re losing jobs all over the place.”

“What I’m asking for is that the co-investment policies continue, because if we are to lose this industry it will be a disaster.

“Co-investment will allow us to buy time to allow the industry to diversify.

“I’d love to think it’s going to stay, but it’s only a question of when.

“Our manufacturing costs are just too high.

“Thinker-in-Residence Goran Roos told me we are the third most expensive place in the world to manufacture anything, just ahead of Finland and Norway and they have value-add skills that we don’t have.”

McBride pointed to the defence industry as one of the few economic positives.

“Defence is a really good news story for SA; the problem is we have only one customer, the federal government.

“That leaves us exposed to spending cuts.

“Defence industries, however, are already looking to diversity to minimise risk.”

In a broad assessment of other sectors of the economy, McBride told the APIA gathering;

He also raised concerns about the size of South Australia’s public sector.

“The public service wages bill is $7 billion and we can’t afford that.

“Unfunded super for the public service is $11 billion, worker’s compensation liabilities are $1.3 billion, our premiums are the highest in the nation and we have the unwanted distinction of being named as the highest taxing state in the nation for the fourth year running. Why would you set up business here?”

On a positive note, McBride said: “We are slightly better off than Spain.”