In Australia we obsess about home ownership.

Rightly so, if you ask me, but I will wait until the end of this column to tell you, to my mind, the two reasons home ownership really matters.

Commonly, we look at the home ownership rate to see how well we are doing in putting Australians into their own homes.

This rather simple measure – what share of households owns the dwelling they live in rather than renting it? – is often used as a shorthand to check if owning a home is affordable.

In international comparison, the Australian home ownership doesn’t appear to be overly high. 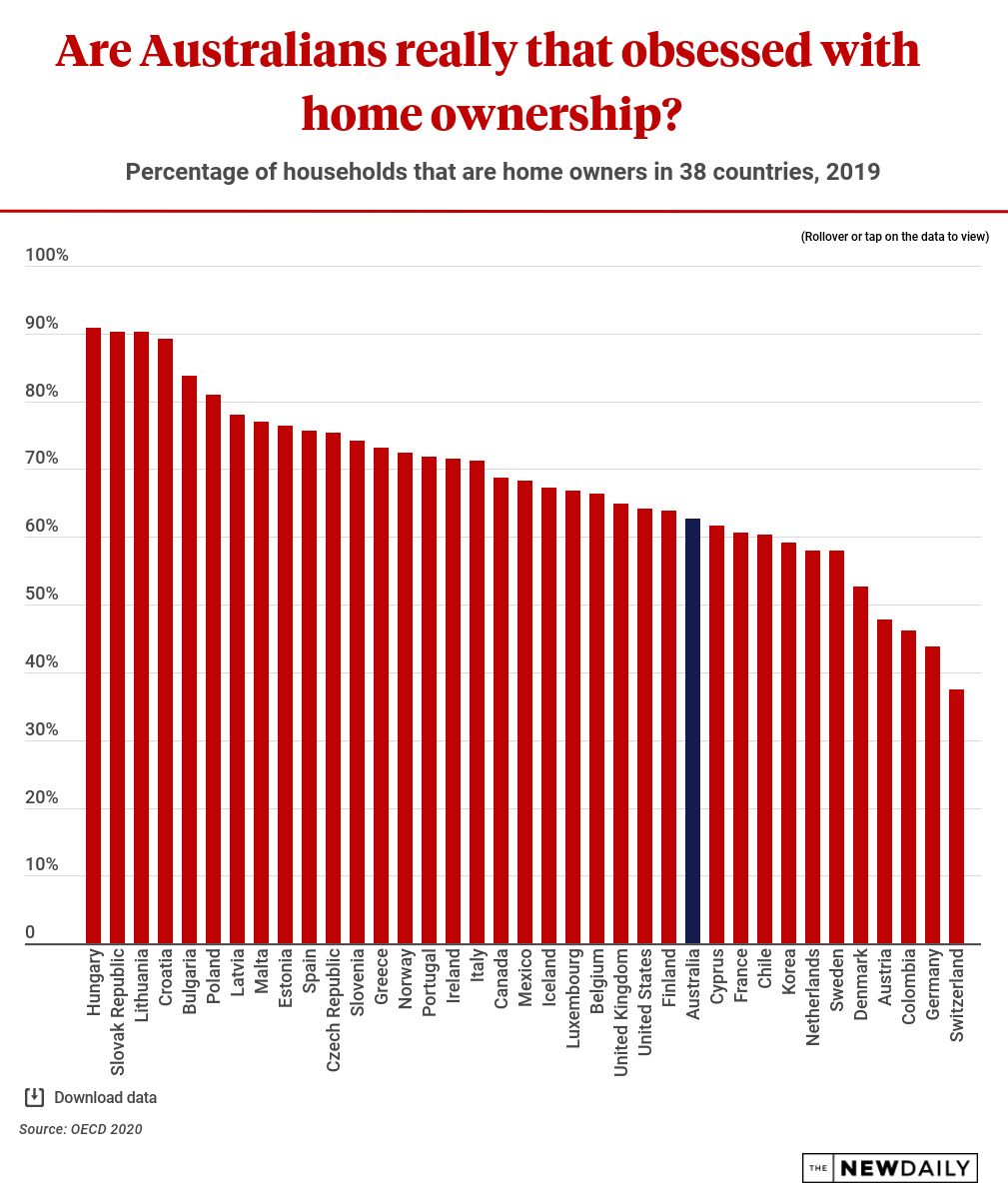 The home ownership rate for Australia (63 per cent) doesn’t stick out as particularly high or low.

A quick look at Census data reveals the general trend towards more renters in Australia. 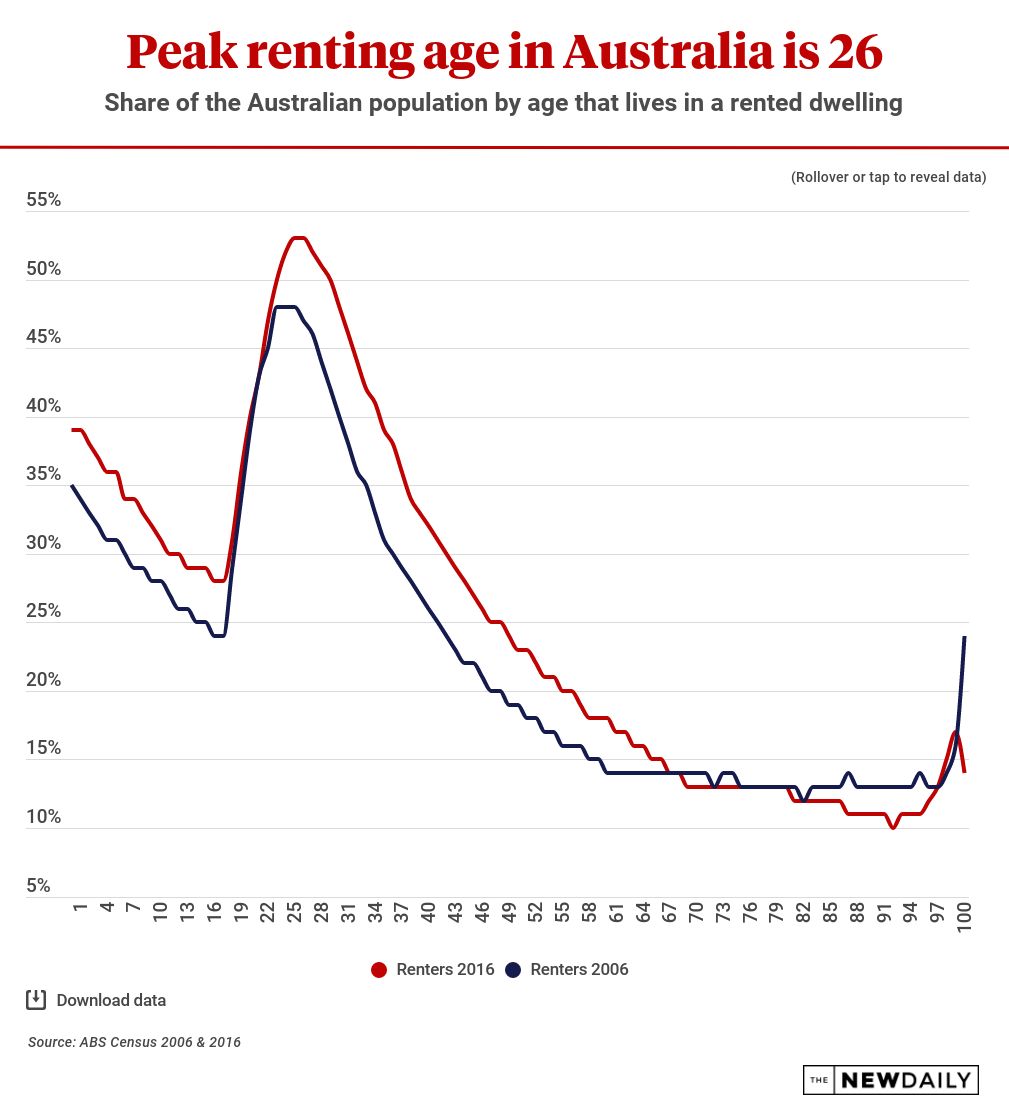 In 2006, only 26 per cent of Australians (individuals not households as measured by the OECD) lived in a rented dwelling and by 2016 this number increased to 30 per cent.

Sure, today more people choose to rent as they move frequently for work opportunities (especially in their 20s and 30s before they have kids).

And sure, we have more transnational, temporary residents in Australia. That’s a fancy way of saying international students and ex-pats who live in Australia for only a few years will naturally be renters.

In the 1970s, over 71 per cent of Aussie households owned their home.

This number can’t possibly climb much higher considering our demographic profile. Australia has long had a relatively young population.

So, there is nothing to worry about then, right? Millennials are now slowly entering the home owner phase of the lifecycle and the home ownership rate goes up.

Let’s have a look at home ownership by birth cohorts to see if that actually is a problem. The general trend is obvious. As people get older, they are more likely to be home owners. So far, so obvious. 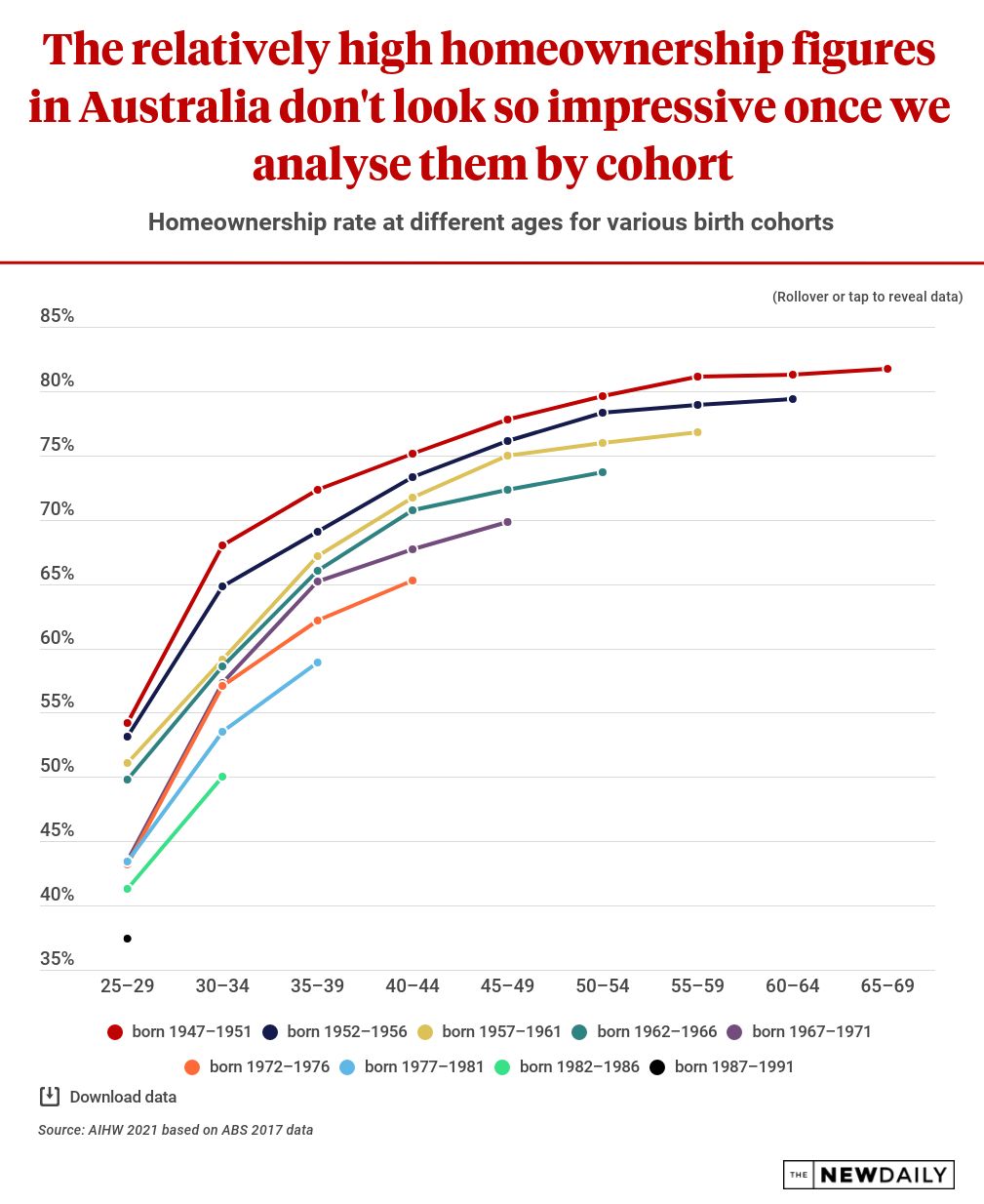 How will the home ownership rate in Australia change in coming years?

In the near term, the home ownership rate is guaranteed to go up. A fair chunk of the big millennial generation leaves their rentals behind to become homeowners.

The generation following the Millennials is much smaller. Consequently, not all rental spots once occupied by millennials will be filled with fresh Gen Zs.

Australia lost international students and skilled migrants during the COVID pandemic. Since most of them were renters we will see the home ownership rate go up.

As the home ownership rate continues to climb, we mustn’t be tricked into thinking we made housing more affordable. So please be cautious when reading about rising home ownership rates in future. Those higher rates won’t tell the full story.

If we can’t trust the home ownership rate as a measure for housing affordability, why should we care about it? Well, at the start of this column I promised you two reasons why this measure matters.

The Grattan Institute found that you are much less likely to retire in financial comfort when you are a renter. The more people we put into their own homes, the less we need to subsidise renter-retirees through the age pension system. Individual retirees and the public coffers are both better off.

The home ownership rate (especially when looking at people about to enter retirement) tells us a lot about the social stability of future retirees.

Secondly, and let me be a bit provocative here, the housing stock gets improved when more people own their own homes.

Hear me out. The quality of the Australian housing stock is linked to the ownership structure. As a home owner, you purchase the best bricks, insulation, floorboards, heating systems and windows that you can possibly afford.

As a landlord, you adhere to regulations but purchase the cheapest bricks, insulation, floorboards, heating systems and windows that you can get away with.

The quality of our homes determines how much energy is needed to heat or cool them; it also determines the life expectancy of a house.

Plenty of the cheap homes that are popping up at the moment have life expectancies of under 30 years. That’s an environmental catastrophe.

When people own their homes, they are more likely to build them with higher life expectancies and the environment wins.

Although you shouldn’t blindly trust the home ownership rate as a measure of housing affordability, you should definitely still keep an eye on this important measure.

This article first appeared in our sister publication The New Daily.