In the 15 years before COVID, South Australia saw an average annual population increase of 15,000 people. During COVID that number dropped to only 2,700 people. Eight industries in the state lost a combined 29,000 jobs in net terms since February 2020.

These numbers sound pretty bad, but don’t worry – this isn’t a bad news story. It’s the opposite.  South Australia is in a great position to start the post-COVID era. Don’t take my word on this one – consider the data instead.

Every state missed out on population growth and economic stimulus due to a lack of international students and skilled overseas workers. Once international borders are open again, international student numbers will quickly return to pre-COVID levels. After all, the demand for academic degrees only went up during the pandemic as the balance of the global workforce continued to shift towards knowledge work.

The big topic in businesses across the nation is the looming skills gap. It’s increasingly hard to find qualified workers across a range of industries. Once borders are open, companies will roll out the red carpet for highly skilled workers from overseas.

The demand for more workers is further driven up by our state and federal budgets. Rather wisely, they focus heavily on building infrastructure. Infrastructure investment helps the middle-class that suffered from the lockdown while boosting GDP. Of course, most infrastructure projects are well overdue as we simply didn’t build enough over the last two decades.

Migrants can also come from within the country. Besides Queensland, South Australia is the big winner of the internal population reshuffle in Australia. Once again, the state attracts more internal migrants than it loses to the other states. Over the last two decades, South Australia always lost population to the rest of Australia (the annual net growth of the state was driven by international migrants). Since COVID, more young people decided to remain in the state and study in Adelaide rather than moving to locked down Melbourne and Sydney only to partake in remote learning.

Anecdotal data also suggests that South Australia attracted more returners than ever before. Returners are folks that grew up locally but left the state in their 20s to pursue educational and professional opportunities in other states. Now that so many jobs allow for remote work, now that house prices in Melbourne and Sydney continued to grow despite the lockdowns, more South Australian exiles decided to finally move back home. We might even have seen a few resettlers (people without any previous connection to the state) choosing SA over other states. South Australia is en vogue. 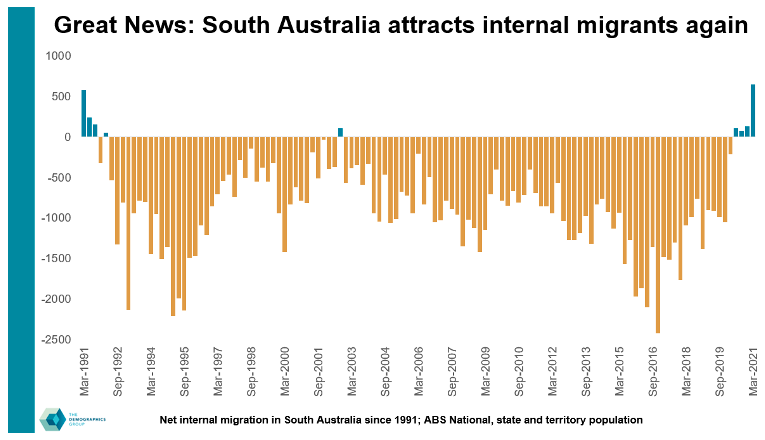 Remember the 29,000 lost jobs that I mentioned in the first paragraph? These jobs losses were set off by 36,000 jobs that were gained across 11 industries. Sure, there is a bit of a seasonal element in the data since we compare February with August, but the trend is your friend.

The public sector, professional services, and healthcare were the driving forces for state-wide job growth in the most difficult of environments. Once borders are open, hospitality, logistics, and education jobs will shoot up again quickly – recovery is in sight. 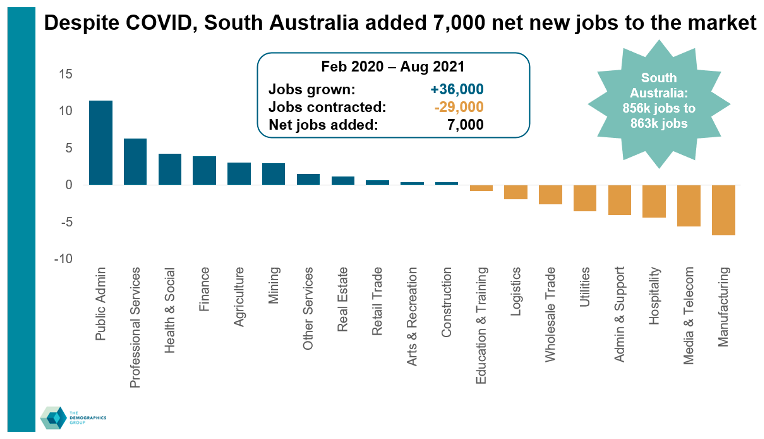 Enough of the past. Let’s look ahead.

By 2031 South Australia will likely grow by 140,000 people to around 1.9 million. That means every single day, 15 new dwellings must be added to the state. That’s great news for the construction sector.

Over the coming decade, population growth will be clustered around three groups. Firstly, the aging population, leading to a further boom in healthcare. Secondly, Millennials heading into their 40s (that the phase of the lifecycle when you spend the most money as you have a mortgage, 1.7 hungry kids, you renovate, buy BBQs and whitegoods like there is no tomorrow). Thirdly, teenagers and young adults. These are the kids of Gen X (South Australia is the unofficial headquarter state of Gen X). Any business associated with these age groups has a prosperous decade ahead. 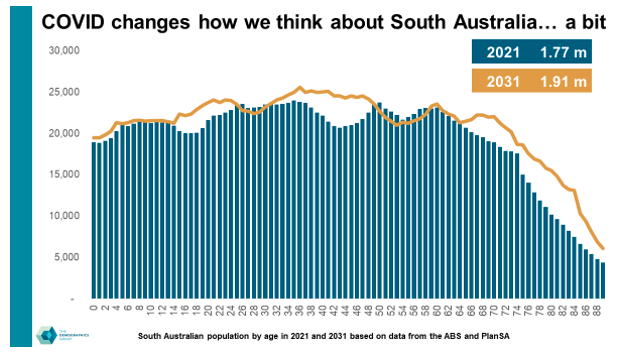 Sure, there are challenges for the state: the aging population, climate change, social cohesion – but hey, which state doesn’t face these? But the overall prospects for South Australia are excellent in the coming decade. South Australia should be loud and proud in advertising itself to the rest of Australia.

Simon Kuestenmacher is a Co-Founder of The Demographics Group. His columns, media commentary and public speaking focus on current global socio-demographic trends and how these impact Australia. Follow him on LinkedIn and Twitter.