The much-maligned “bank tax” was a pivotal episode in the state’s recent political life, showcasing a bitter PR battle between business – led by Bank SA – and the former Labor government.

The controversial measure to raise around $360 million over four years in new taxes on the major banks was outlined in Tom Koutsantonis’s final budget as Treasurer, in June 2017.

Amid the business backlash, the deep and immediate impact on economic activity was articulated early by the Bank SA CEO Nick Reade, in an outraged opinion piece published in The Advertiser.

“I can also tell you that the South Australian Government’s assault on our business will force us to reconsider plans for growth in the state,” Reade thundered.

“Westpac [which owns Bank SA] operates many of its back office functions from Adelaide. We also have imminent plans to create a process automation hub in SA creating 150 jobs – but this is now on hold.”

After dumping his budget centrepiece in November 2017, Koutsantonis wrote to Reade, challenging him to “provide details on the automated processing centre and the 150 jobs”.

“Presumably, this project has now been revived given the only impediment previously mentioned was the major bank levy… if there is anything that I or other members of the Government can do to expedite the project, please let me know.”

So did the automated processing centre ever actually eventuate?

Well, emails addressing that very question have been flying to and fro over the past few days and we can definitively say that we’re not really sure.

It probably depends on how you define an “automated processing centre” – which was, in hindsight, probably a point worth clarifying back at the debate’s zenith.

Certainly, the impression created by Reade’s use of the phrase – “create a process automation hub in SA” – was that the bank planned to establish some new piece of infrastructure, an extra operation.

This was certainly the impression conveyed across various media, including The Advertiser, which declared that “Bank SA says it will put on hold a plan to open a new backroom office in Adelaide” and later that the tax had forced it “to halt plans for 150 jobs at a new Adelaide office”.

Over at FIVEaa, presenter David Penberthy, interviewing then-Opposition Leader Steven Marshall, noted that the bank had “cancelled a new call centre project that would have created 150 jobs”.

The bank insists the 150 jobs were eventually created – pointing out a paid full-page advertisement that ran in The Advertiser in November 2017.

In response to inquiries, a bank spokesperson told InDaily: “In late 2017, we commenced recruitment across Technology, Operations and Risk, employing over 150 people in South Australia.”

“We are one of the largest employers in the state and we continue to look for opportunities to grow our local workforce and invest in the state,” they went on in a written statement.

The intent wasn’t for a new physical building, the intent was to bolster those existing hubs with over 150 new staff

“Aligned to the expansion of our workforce, we have recently invested in our Lockleys site by installing a significant solar power facility (equivalent to 420 average sized homes) and continue to invest in young South Australians through our Graduate and Internship programs.”

Requests to speak with Reade directly were knocked back, although after our queries were sent through he pointedly tweeted another paid full-page advertisement that ran in The Advertiser last month:

⁦@BankSA⁩ is hiring in Retail and Business Banking.
Let’s Do This! pic.twitter.com/yx6ChWYXyK

In response to the bank’s original statement, InDaily sought to clarify whether the 150+ jobs were indeed created as part of a “process automation hub” – and what exactly that is.

“The term ‘process automation hub’”, we were told, “was used to describe a collection of new roles, capabilities and functions to be located in Adelaide”.

“We’ve had a number of large processing hubs in SA for some 20 years, so the intent wasn’t for a new physical building, the intent was to bolster those existing hubs with over 150 new staff.

“When the bank tax didn’t go ahead, we still wanted to deliver on our commitment of the 150 jobs and that’s exactly what we did – in fact it was more than 150 roles.”

We also sought to clarify whether this meant the bank now employed 150 more full-time-equivalent staff than it did in mid-2017, or whether branch closures have cancelled out the new hirings.

The Australian reported in December 2017 that Westpac, which owns the Bank SA brand, “closed 35 branches in South Australia over the two years [from mid-2014 to mid-2016] — a decline of nearly 25 per cent”.

“In terms of branch closures, I can confirm that BankSA redeployed all impacted employees,” a spokesperson said.

“I’m unable to go into the specifics of FTE but can confirm that the Group headcount has marginally increased since July 2017.”

So, we pondered, did Reade over-egg the proverbial pudding when he lamented the bank’s abandoned plans “to create a process automation hub in SA creating 150 jobs”?

The bank insists he didn’t.

“We committed to creating 150 jobs in SA in areas like Technology, Risk and Operations (including automation capability)… we have delivered on this commitment to create more than 150 opportunities for South Australians to work across the Group in several of our existing hubs,” the spokesperson said.

“An example of new capability we introduced is the development of Artificial Intelligence here in Adelaide to support home lenders with the right knowledge to provide the most value for our customers.

“We remain committed to being one of the largest employers in the state and will continue to look for further opportunities for growth.” 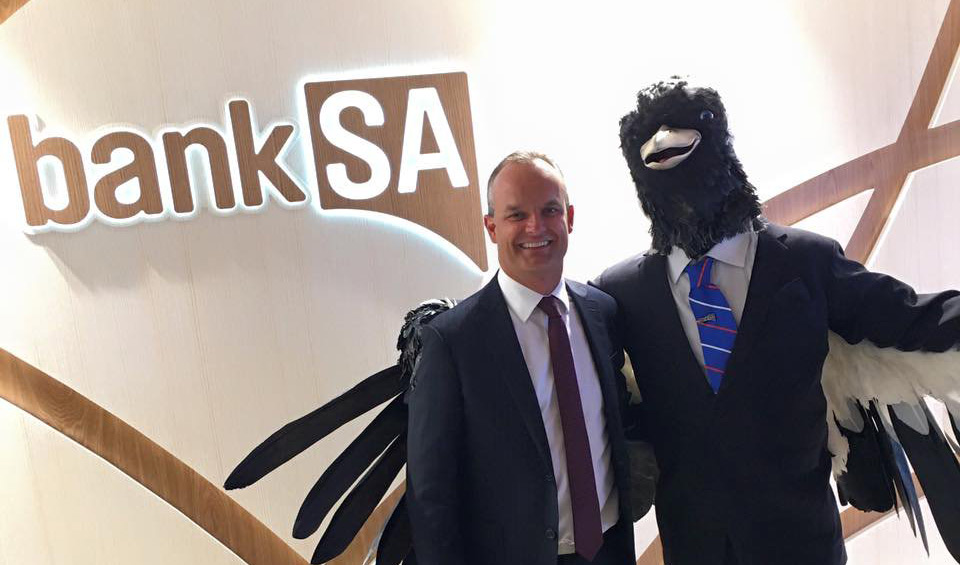 Reade with BankSA mascot the Piping Shrike in 2015. Photo: Twitter

Labor’s Shadow Treasurer Stephen Mullighan – who in a separate media conference last month described banks in general as “easily the greediest members of the Australian community” – begs to differ.

“South Australians were led to believe that BankSA would be creating a new processing facility [with] 150 jobs,” he told InDaily.

“It’s clear the new facility hasn’t been delivered, and given the scale of branch closures by BankSA – and all of the ‘big four’ recently – it’s hard to believe any of these jobs have been created. 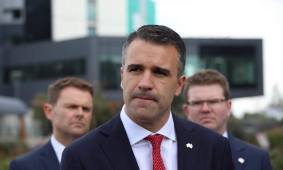 Secrets and lies? A day in the life of the spin cycle

“Bank SA’s closure of its Semaphore branch – just metres from my electorate office – and the Willunga branch, are leaving many South Australians thinking that the big banks aren’t interested in serving its customers in the way that the community expects.”

Asked whether Labor still regarded the failed bank tax as good policy, Mullighan noted that “certainly the Federal Coalition Government decided that the banks needed to make a more substantial contribution to Australian taxpayers through the imposition of its own bank levy”.

However, he added: “The State Parliament has already made its position clear – and given that it’s not a specific recommendation arising from the Banking Royal Commission, state Labor will not be pursuing it in the future.”