And yet, to the casual listener, his argument – on ABC Radio Adelaide – would have sounded, no doubt, credibly compelling.

The subject of his ire, as outlined in a media release from the Labor leader yesterday, was his theory that “the Port Augusta solar thermal plant could be at risk, with the Marshall Liberal Government calling in consultants to review the government’s energy supply contracts, which are helping underwrite the project”.

The media release went on to explain that “Government documents reveal the Liberals have contracted CQ Partners Pty Ltd to ‘undertake a review of the electricity supply and retail contracts’ and ‘provide a confidential report’ to Treasury”.

It didn’t get much of a look-in with the TV media yesterday (besides the obligatory ‘politics-or-nothing’ lead story on the ABC) but Labor would have been heartened that what little coverage it did get was couched in terms such as “the Opposition claiming the proposed $600 million Port Augusta solar thermal plant is being put at risk by the Government” or “the proposed solar thermal plant for Port Augusta being placed under a cloud”.

At any rate, Malinauskas was given ample chance to restate his grave concerns – and frame the ensuing debate – with a 9am radio soapbox, which he exploited to full effect.

“Firstly, we learned that the Government is going about this surreptitiously: they have decided to engage a consultant and we don’t know at what expense, to have a review of the contract regarding the solar thermal plant construction with SolarReserve – and there hasn’t been any public explanation as to why they have decided to do that.”

But in truth there is not a single part of that monologue that stands up to any scrutiny.

Let’s just break it down line by line.

In fact, the mysterious ‘secret’ contract document the Opposition triumphantly distributed to media yesterday is available on the Government’s own ‘Contracts and Tenders’ website.

Which is where Labor got it.

Here’s a link to it.

Or, if that’s too much trouble, here’s the contract available for download on the site:

Indeed, so surreptitiously did the Government go about this furtive venture, that Treasurer Rob Lucas alluded to it in a clandestine ministerial statement in parliament on August 2. Of course, it was couched in all kinds of nuance and double-speak, but he accidentally gave a clue to his intentions when he said: “For transparency, the Marshall Government will engage an independent consultant to review the whole-of-government electricity contracting arrangements undertaken by the former government.”

Tell us what you really mean, Rob!

“This review will consider whether an earlier procurement process should have been used and what other options existed that might have reduced costs to taxpayers,” he mysteriously went on.

Let me help you out on that one, Pete.

If you click on that link to the Contract website posted above, you might notice a line that says: “Total inc GST”? Perversely, this denotes the cost (or “expense”) of the contract. I’ve helpfully highlighted the amount below.

If you’re still not convinced, there’s a bit buried within the contract itself entitled ‘Item 9: Fee’, which states “the client will pay to the consultant… up to $49,500 (including GST), with specific amount and timing to be agreed between the client and the consultant estimated based on details in Table 1”. Table 1 specifies a daily rate for the individual consultants of $3080 for Mr Reza Evans and $2420 for Mr Nick Eades, who expect to work for 9 and 10.5 days respectively, excluding modelling.

But, apart from that, yeah, we have no idea about the expense.

Quite right, Mali. We deserve a full and frank public explanation about this, and so far we’ve heard nothing.

Well, apart from a media release from Lucas back in August, that aforementioned ministerial statement and a media conference just yesterday in response to Malinauskas’s original hysterical claims.

Apart from that, not a peep.

Putting aside the fact that the scrutiny of the SolarReserve contract is but one part of a broader government energy supply review, to answer the Labor leader’s question re “public explanation”: Lucas’s August 2 press release bemoaned that “electricity costs across government are expected to jump by $45 million to $106 million this year – a staggering 73 per cent hike – thanks to a rushed and incompetent deal struck by the former Labor government”.

Credibility is the rarest and most valuable of attributes in politics… once lost, it’s never truly recovered

In both his media statement and his explanation to parliament back in August, Lucas argued that Labor’s procurement arrangements for the supply of electricity to government were “commenced only six months before the expiry of the whole of government contract”.

“As a result of this agreement, from 2020 the state government will source its electricity via a Generation Project Agreement with Solar Reserve and its Aurora solar thermal generation project near Port Augusta. The creation of this agreement meant that the former government had to enter into a retail services agreement to provide electricity for the bridging period – January 2018 to when the solar thermal plant is operational, estimated to be November 2020.

“To secure bridging electricity supply arrangements from 1 January 2018 until 31 October 2020, the former government entered into one-year contracts with incumbent suppliers Origin Energy and Simply Energy for small metered and unmetered lighting sites respectively, and an energy retail services and supply agreement with ZEN Energy for the provision of electricity supply and retail services for the supply of electricity to all government sites from 1 January 2019 to 31 October 2020.”

According to Lucas, “the broad financial implication of the contracting arrangement for the bridging term is a significant increase in the cost of electricity for government sites from January 2018, [with] initial analysis suggesting total costs may increase to $106 million in 2018, an increase of $45 million from 2017, representing a staggering 73 per cent rise.”

An explanation of sorts, then… unless Malinauskas is suggesting Lucas’s previous detailed explanation is untrue? 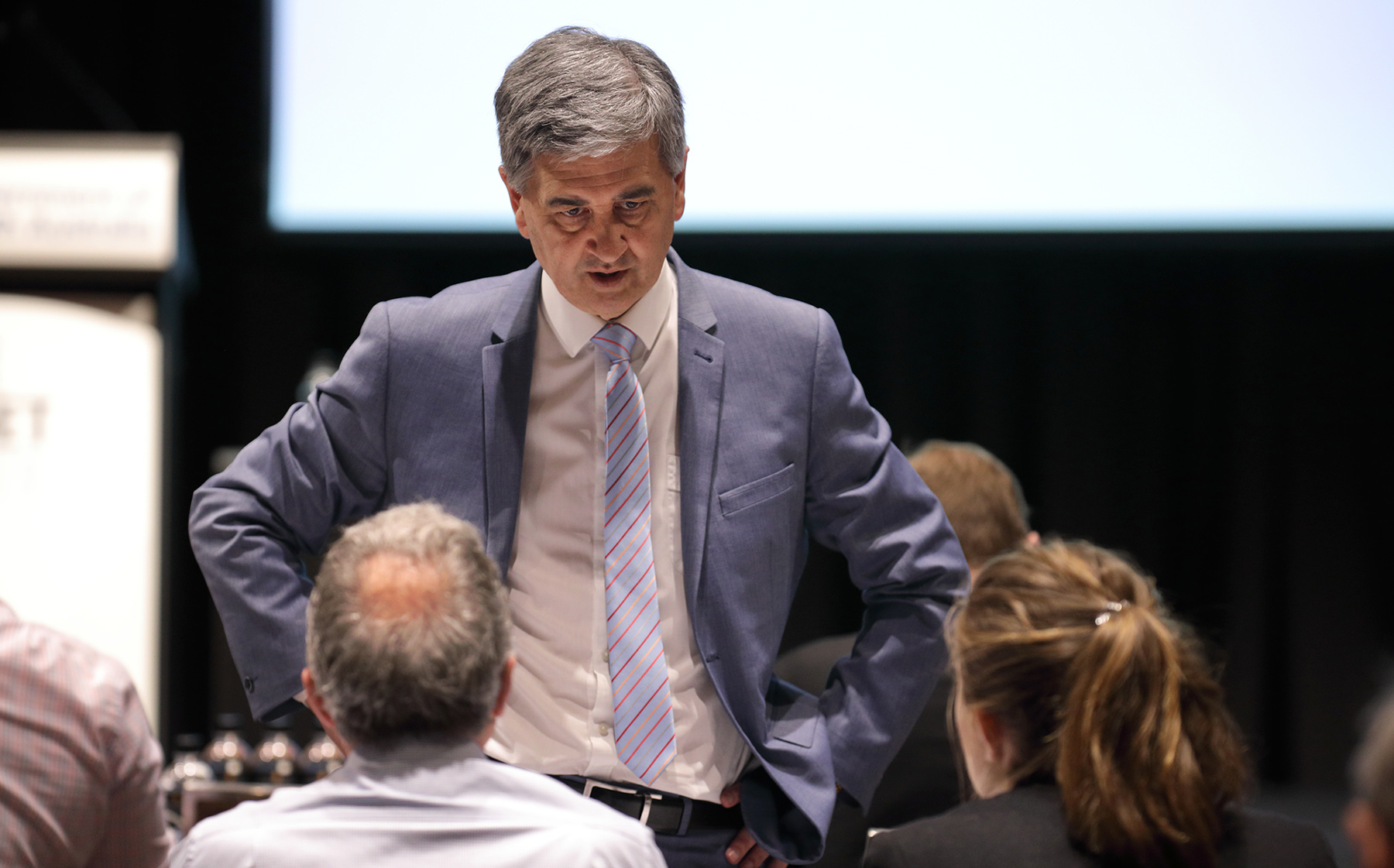 Given Malinauskas’ penchant for Government transparency, he might want to note the following from Lucas’s August missive:

“The Government has sought to understand the basis for this increase and has been advised that, during the assessment and negotiation of final contractual arrangements, Frontier Economics provided advice [to Labor] on the merits of the proposition and cost implications in comparison to benchmark prices.

“However, we have been advised by Cabinet Office that we may not access this report due to the fact that the former Labor government attached the pricing analysis report to a submission to the former Weatherill cabinet.”

Lucas told parliament: “We believe it is critical that the pricing report should be made public because it is important for South Australians to understand the basis on which this deal was struck, given the $90 million in additional electricity charges in the period up to 2020.”

All well and good perhaps.

But, as Malinauskas went on to suggest in his radio diatribe, isn’t “the very act of engaging consultants… a very clear signal to would-be investors into SolarReserve from the new State Government that they are contemplating amendments or change or even scrapping of the contract”?

But then, Lucas had already dismissed this prospect just yesterday during a media conference to respond to the very issues Malinauskas had raised.

“The Government’s legal advice is that there is a legally-binding, long-term contract for Solar Reserve,” he told reporters.

“The contract is valid, it’s legally binding, so this particular review has no capacity of power to overturn a legally-binding contract, which locks the current Government into the deal that was signed by the former Labor government.”

Even then, he’s hardly singing the project’s praises, is he?

As Darth Vader once said: I find your lack of faith disturbing.

An artist’s impression of the Aurora plant to be built by SolarReserve.

But the fact is, whatever happens or doesn’t happen with the Port Augusta project, it won’t be due to the Government failing to hold up its end of the bargain.

Already, in recent months, the $650 million plant’s ‘switch-on’ date has been delayed until 2021 because of delays in securing private investment.

While it’s theoretically possible the Government’s $49,500 whole-of-government energy contract review could scare off potential backers, I’d suggest the baseless hysteria being peddled by the Opposition in the last 24 hours would be more likely to achieve that outcome.

This kind of thing, for instance: 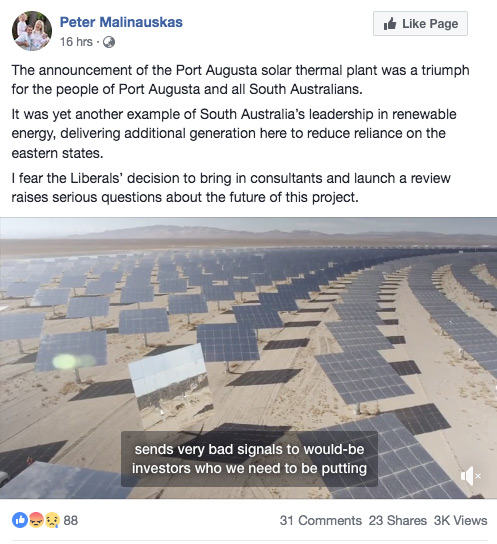 Malinauskas came to the Labor leadership promising a consultative, constructive approach. But on the strength of today’s performance, it’s taken a mere six months for him to settle into the cheap politics of petty point-scoring.

A lesson worth heeding: credibility is the rarest and most valuable of attributes in politics. And once lost, it’s never truly recovered.

If the return of politics-as-usual wasn’t evident enough, it was left to Port Augusta mayor Sam Johnson to cut through the crap after the Labor leader vacated the airwaves.

“I guess that is their job at the end of the day.”

“For myself and for Port Augusta,” Johnson went on, “I very much believe that this project will still happen, whether the Government choose to do a review or not.”

Given the chance for his own rebuttal, Lucas was less measured.

“Most of what Peter’s just said is absolute garbage, if I could use intemperate language,” he ventured.

The Treasurer may not be able to use intemperate language, but I can.

It was complete and utter, rolled-gold bullshit.

Tom Richardson is a senior report at InDaily.