Last week, my wife and I had old friends from Geneva to stay. He is English and she is French. They now live in a French village just across the border from Geneva. It was her first visit to Australia; he last visited more than 30 years ago. They flew in by Qantas Tuesday night from Dubai.

On Wednesday we started with tourism chores – changing money, getting sim cards and buying a guide to Australian birds. I was impressed that the NAB on Norwood Parade was able to change a significant quantity of Euros into $A without prior warning; that Optus in Norwood Place readily and inexpensively fixed the overseas sim card problem; and that Dillons on the Parade had a variety of excellent guides to Australian birds.

In the afternoon, we went to Cleland Wildlife Park. We were not disappointed. Potoroos and bandicoots, roaming in profusion, greeted us as soon as we set foot in the Park. We encountered Tasmanian devils, koalas (including one that we could touch), dingos, a profusion of land and water birds of all kinds (including rare creatures like a frogmouth, standing still as a statue), a large variety of wallabies and kangaroos (a number with joeys in pouches – or trying to get back in!) and several wombats.

The animals were in very good condition – a tribute to all the people involved in looking after the Park.

Late the next morning, sunny and warm, we set off by car for the Barossa and Clare Valleys, via the Main North Road, Gawler and Lyndoch. First stop was the impressive Jacob’s Creek Visitor Centre where we picked up maps and information. Next stop was Lawley Farm, a charmingly restored settlers’ cottage with four double bedrooms on the outskirts of Tanunda, that we were scouting for a group visit next year. This just happened to be next door to Rockford Wines…

A splendid, shared-plates, lunch (with one glass of light beer!) outdoors on the patio at Fino’s at Seppeltsfield followed, together with a wander through the Jam Factory Gallery alongside. After lunch, we drove to Clare via Kapunda, Tarlee, Auburn and Sevenhill, for a rest-up at the very comfortable Clare Country Club, where we were booked overnight in adjoining lakeside units.

That evening we met up with friends from Clare to dine at Seed Winehouse and Kitchen, where, again, the shared-plates food (and carafe wine) was exceptionally good. Fortunately, we had booked: the restaurant was packed (not bad for a Thursday night in a country town two hours from Adelaide).

The next morning the weather deteriorated. Undaunted, after breakfast in our units, we drove South to Sevenhill turning left for a quick look at the impressive, Jesuit-run, vineyards and Sevenhill Cellars, where Saint Mary Mackillop spent some time. We crossed back to the Western side of the main road to explore the vineyards and wineries on that side of the main road. We stopped at Skillogalee where we had coffee on the veranda of the winery’s restored 1850’s cottage/restaurant/cellar door, overlooking the Skillogalee Creek at the foot of the vine-planted slope, below. A kookaburra serenaded us. All was well with the world.

We pushed on south, turning left off the main road towards Mintaro, which we drove slowly through, past the ancient Magpie and Stump Hotel, the Mews and other historic stone buildings. Taking a left turn, we drove the few kilometres needed to historic and forlorn Martindale Hall, where much of the iconic Australian movie, Picnic at Hanging Rock, was shot. Built in Georgian style in the 1870s by wealthy pastoralist Edmund Bowman for his English fiancée, Martindale Hall failed to hold her.

After that, back to Clare for another outstanding shared-plates lunch at Mr Mick’s, just off the main road on the southern outskirts of Clare (again one glass of light beer!). Mr Mick’s was packed for lunch also (a Friday – where did all these people come from?). People in Clare were envious that we were lunching at Mr Mick’s. After lunch, we picked up some Tempranillo and Riesling from Tim Adams and started the two-hour drive home via the Northern Expressway. 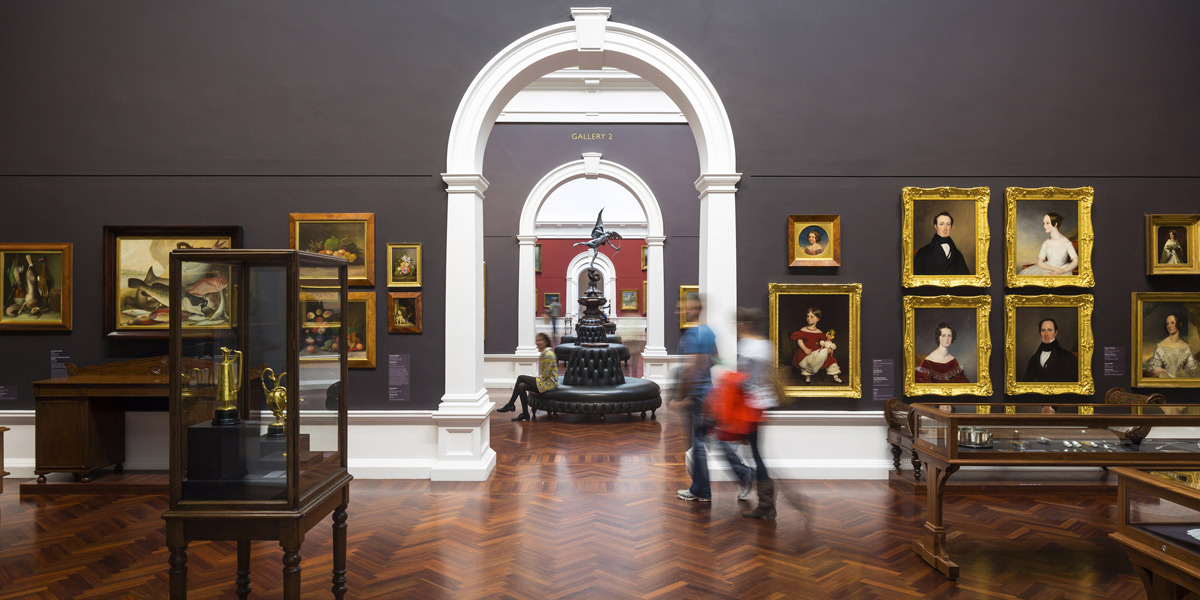 On Saturday, we showed off the city.

First, a drive-by of the new Adelaide Oval along War Memorial Drive by the Torrens, continuing on along War Memorial Drive between the North Adelaide Golf Club and the Par Three course, left across the railway line onto Park Terrace, left onto Port Road, left onto North Terrace past the new RAH, on past the impressive collection of medicine-related buildings opposite UniSA, on past the Convention Centre, the InterContinental Hotel, the Casino, Parliament House, Government House, the State Library, the Museum, the Art Gallery, and the University of Adelaide (where we parked).

Our guests were keen to see the Australian collection in the Art Gallery and to look around the Migration Museum. Accordingly, we went up the right-hand set of galleries from the main entrance to the Art Gallery, starting with the earliest colonial paintings and Aboriginal artefacts, and progressing through the 19th Century to the modern day. Our visitors were struck by the interplay between “Australianness” and whatever European art fashion happened to be at the time. Like me, they found the Gallery’s great patriotic works, like Tom Roberts’ “A Breakaway”, Charles Conder’s, “A Holiday at Mentone”, and Arthur Streeton’s “Australia Felix” to be quite inspiring.

After a sandwich lunch in the sunny Gallery restaurant, we walked behind the Museum to the Migration Museum. The Migration Museum has changed a lot since we last visited decades ago. It now pays more attention to the impact of white settlement on the Aboriginal inhabitants, restrictions on non-British migration during much of our history and more recent migration from many different countries. Our visitors found this history to be very open and interesting.

Our friends have spent much time in India, which they like a lot. As our farewell dinner together, we chose The Cinnamon Club on The Parade, Norwood. As usual, the meal and service were both outstanding, as well as the place being fun and buzzy. Again, the restaurant was packed. Our friends chose mostly North Indian dishes and said that the food was as good as they had eaten anywhere.

When they left, our friends said what a fantastic time they had had and what a wonderful place Adelaide was. They are right, of course. Adelaide and its surrounds are extraordinarily appealing on a world scale. Mind you, I have never seen the countryside so green and lush. But the friendliness and courtesy of the people we encountered everywhere was striking. My wife and I felt very proud of our people.

Richard Blandy is an Adjunct Professor of Economics in the Business School at the University of South Australia and a weekly contributor to InDaily.