As we said in our previous article, the main attraction of fast rail is not inter-city travel between megacities, but for regional and commuter travel between country towns and city CBDs. These are the rail lines where value is generated (and can be captured) to finance the rail projects.

Additionally, they would reduce pressure on the South Australian Government to expand Adelaide’s urban boundary by redistributing a portion of the state’s population to the regions. This would also reduce the capital’s imposing dominance over the rest of the state.

A fast railway to the Iron Triangle towns of South Australia’s Gulf regions, with stops at Salisbury, Port Pirie and Port Augusta, would service a combined regional population in excess of 60,000. It could also be accessed by more than 80,000 people in the northern suburbs of Adelaide near Salisbury, together with substantial mining, tourism and agricultural interests in nearby regions.

Whyalla, Port Augusta and Port Pirie are all struggling economically for a variety of reasons.

The region’s fortunes can be revived by removing non-essential business regulations and providing substantial regional tax breaks for companies and individuals. This would encourage entrepreneurs, innovators, and small – and possibly large – businesses to relocate there.

One of the main reasons why Adelaide is so dominant economically in South Australia is because the public service is concentrated there, along with the universities, research centres, and so on. It would greatly help the economies of large towns like Whyalla, Port Augusta and Port Pirie if some of the South Australian Public Service were to relocate there.

In New South Wales, for example, the Department of Mineral Resources is in the Hunter Valley, the Department of Primary Industries is in Orange, and the Firearms Branch of the NSW Police is in Murwillumbah. The Australian Taxation Office is in Albury.

A northern fast railway would help drive such a regional economic renewal strategy in South Australia. The railway would be straightforward and inexpensive to build. The land is basically flat the whole way, and the existing corridor is mostly straight, even within Adelaide.

There are two broad corridor options; a westerly option via Virginia, Two Wells and Mallala, or an easterly option via Gawler, Hamley Bridge and Balaklava. Both options would use the Indian Pacific route north of Snowtown.

The eastern route would have the advantage of serving a substantial existing suburban population, and steer clear of routes with heavy freight traffic.

The western route would involve fewer greenfield deviations, avoid expensive suburban construction, and could be preferred by a government wishing to foster growth in the Virginia corridor. Either way, both routes are approximately equal in terms of construction cost.

The works involved would include:

The total cost for 380km of high-speed track would be about $1 billion, or approximately $2.6 million/km. This very low cost is achieved due to re-use of existing infrastructure, utilising single non-electrified track, requiring very few earthworks or bridges, and no tunnels.

This is in stark contrast to the mooted East Coast super-fast railway, which the 2013 AECOM study predicted would cost a staggering $65 million/km.

A reasonable timetable might be one train every three hours in each direction departing the terminal stations Adelaide and Whyalla at, say, 6am, 9am, noon, 3pm and 6pm. This would allow a generous 45 minutes for refuelling and cleaning. Such a timetable could be achieved using just two train sets.

Bus fares to Adelaide from Port Pirie, Port Augusta and Whyalla are about $50, $60 and $70, respectively. Whyalla is the only one of these towns to have a regular air service, for which the lowest saver fare is $125.

With train travel times roughly half to a third that of driving, a $60 average fare from these three Iron Triangle towns would be highly competitive with existing transport modes.

With five trains per day in each direction, each comprising a typical four-car, 200-pax trainset similar to the British Rail Class 221 Voyager, the line would have a maximum daily ridership of 2000 people but would be more like 1500 with a 75 per cent capacity rate.

Assuming most of the demand comes from the three Iron Triangle towns, this is an average of about 50 passengers per train picked up or dropped off at each station.

This is only slightly higher than the existing capacity offered by the scheduled airline service to Whyalla. It is highly probable that such passenger numbers could be achieved in the short term.

As regional development progressed and demand increased, capacity could be increased by increasing train size or increasing service frequency, though this second option would require additional trainsets and provision for passing loops.

However, 1500 passengers per day – a bit over half a million per year – will not make the railway profitable. At an average fare of $60, gross revenue would be only $33 million, 3.3 per cent of up-front costs. Even if passenger numbers quickly rose to 3000 a day, return on investment would be substantially below that required to attract private-sector investment.

It must be taken into account, however, that this is before considering the substantial potential of value-capture to offset construction costs.

The successful bidder for the right to build the high-speed rail network could also be awarded the right to develop some railway station precincts into multi-use residential and commercial hubs.

There are at least four major sites available. The Whyalla, Port Augusta and Port Pirie station precincts are all large, prime waterfront sites with the potential to become urban renewal epicentres. The Islington yards in Adelaide’s inner north form one of the last large development zones available within the existing urban boundary. If the Virginia route were chosen, a greenfield development site would also be available in Adelaide’s outer northwest. Each of these sites represent a potential multi-billion-dollar development opportunity.

If the total value of these station-precinct developments was $5 billion – $1 billion per site – value capture by the railway of 10 per cent would be $500m, or about half of the railway’s cost.

Revenue from the railway could be further augmented by leasing the metropolitan section of the line to the State Government for its Adelaide Metro services. This option might make the Virginia route more desirable than the Gawler route, as a Virginia route is not currently offered on the Adelaide Metro network.

If such a service were to achieve passenger numbers similar to the Seaford line, we could expect ridership upwards of 5 million trips per year. A modest government subsidy of $5 per trip, about half the typical subsidy level of metro rail transport, would bolster the railway’s revenues by a further $25 million per year.

Summarising all these options, the near-term revenues of an Adelaide-Whyalla regional fast railway could be about $58 million per year on a cost base of $500 million – a gross annual revenue before operating costs of 11.6 per cent.

Probable patronage increases could see gross revenues increase to 20 per cent a year or more, while a more aggressive value capture strategy could conceivably pay for the entire construction of the railway. 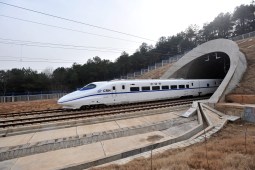 The case for regional fast rail in South Australia

An Adelaide-Whyalla railway could be highly profitable in the short term, particularly with the co-operation of the South Australian Government to make suitable development sites available and leasing parts of the railway to expand metropolitan services.

Richard Blandy is an Adjunct Professor of Economics in the Business School at the University of South Australia and is a weekly contributor to InDaily. Edwin Michell is a Canberra-based engineer and writes a blog called Hot Rails  Regional Fast Rail for Australia.