There has been much talk over many years of a superfast rail link from Melbourne to Brisbane via Canberra and Sydney.

Most recently, in 2013, the Commonwealth Department of Infrastructure and Regional Development released a study by the multidisciplinary engineering firm AECOM, proposing a 1748km railway linking Melbourne, Canberra, Sydney, Newcastle and Brisbane, with a design speed of 400km/hr (upgradable to 500), a 40-year construction timetable, and an eye-watering price of $114 billion.

This is fantasy stuff. No railway in the world does 400km/h, far less 500. The Europeans do 200-320km/hr. The Chinese briefly tried 350km/hr, but soon dialled it back to 300 due to excessive maintenance and safety concerns. The AECOM study’s need for speed arises from the objective to compete time-wise with planes. This also means the trains can’t make many stops. With such a strategy, there is little opportunity to utilise “value capture” financing.

The super-high speed also drives up construction costs massively, because of the tunnels, bridges and earthworks to make the track straight and flat enough to accommodate 400km/h passing through the Great Dividing Range, as well as the tunnelling required in Sydney to get fast from the outskirts to the CBD.

The focus on providing a fast, heavily-subsidised alternative to air travel between the eastern capitals is misplaced. There is already a fast, inter-city service provided by competing, unsubsidised airlines. The focus should instead be on cutting down the spatial footprint of the capital cities and reinvigorating country towns by providing fast and affordable commuter services between them and their capital cities. Shorter distances allow slower design speeds to be used, with correspondingly lower construction costs.

No other Australian state is so culturally and politically dominated by its capital as is South Australia by Adelaide. It is a bizarre and unnecessary feature of South Australia’s geography that 80% of the population is in one giant (space-wise) city. Such a situation would not be tolerated in Europe.

Regional very fast rail would attract population into our regional towns, boost their growth, reallocate our population towards cheaper, better, housing, and lead to an increase in real output and living standards.

It also turns out that South Australia, with its mostly flat terrain, is well configured geographically to allow such a regional fast rail development to be constructed at far lower cost than proposals to link the eastern capitals. Such a regional fast rail development would assist the decentralisation of population and economic activity away from Adelaide, and put a limit on Adelaide’s commuting times and geographical spread.

In the present article, we look at the first of these projects. A future article will look at the other projects.

A fast Adelaide – Victor Harbor railway would serve a present permanent exurban population in the vicinity of the railway line of more than 60,000. This could be expected to grow rapidly as commuters spread quickly into these highly-desirable areas with the advent of the very fast train.

By comparison, without allowing for traffic, Google maps estimates 32 minutes to Mount Barker, 51 minutes to Strathalbyn, more than 80 minutes to Goolwa (depending on the route chosen) and 74 minutes to Victor Harbor. Commuting at peak hours would obviously take longer – up to 50% longer. 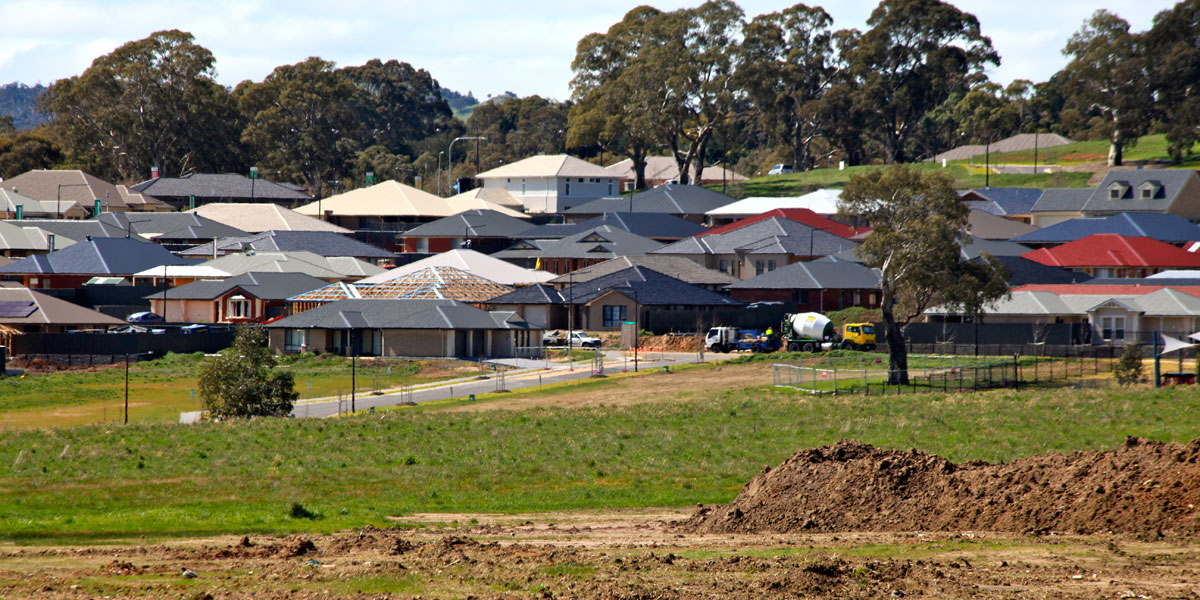 Fast-growing Mt Barker should be on a fast regional rail route.

According to a study published by The Advertiser five years ago, the peak-hour commute between Adelaide and Mount Barker was then about 50 minutes. By now, it would be longer. Commuting by high speed rail to Adelaide CBD would cut commuting time from Mount Barker in half.

There were about 18,000 workers resident in Mount Barker in December 2015, an estimated 60%, or 11,000, of whom are estimated to commute to Adelaide daily. Judging by past experience elsewhere, fast rail could be expected to capture about 20% of this traffic – or more than 2000 commutes (4000+ trips in total). Other, non-work-related travel would add to the total.

But the real prize, for both commercial and development objectives, lies in induced demand – additional demand made possible by the railway itself. If a very conservative 5% of the projected population increase could be diverted to the proposed rail corridor as regular commuters, within a decade the railway would have more than 8500 daily commuters, on top of users diverted from existing transport modes. It is thus reasonable to conclude that there could be a near-term commuter market for high speed rail to Victor Harbor of at least 20,000 trips per day, comparable to existing demand on the Seaford Line.

A fare structure of $10 one-way from Adelaide to Mount Barker, $20 to Strathalbyn and $30 to Victor Harbor would appear to be competitive (based on coach fares and surveyed commuter time preferences). If passenger numbers rose rapidly to an average of 20,000 trips to or from Adelaide per day at a fare averaging $20 each way, the line would earn revenue of about $150 million/year – a gross return on investment of 11.5% without accounting for value capture.

The spill-over gains to non-passengers from the Adelaide-Victor Harbor very fast train – decongesting the Hills freeway, reducing pressure on the Adelaide urban boundary, reducing commuting time within Adelaide itself, as well as the increase in property values in towns where the train stopped – would warrant a state and relevant local government contribution that could be determined by cost-benefit analysis.

Hence, such a project, subsidised by warranted state and local government capital contributions, could be highly attractive to a private investor.

Richard Blandy is an Adjunct Professor of Economics in the Business School at the University of South Australia and is a weekly contributor to InDaily. Edwin Michell is a Canberra-based engineer who writes a blog called Hot Rails – Regional Fast Rail for Australia.