The notion that bicycles should be registered frequently gets a good airing, but we hear less about the idea that cyclists themselves should be licensed.

Last week NSW Roads Minister Duncan Gay changed all that. He brewed up a storm when he told 2UE’s John Stanley, “I’m increasingly persuaded that we need to look at licenses for cyclists” (e.g. see here, here, here and here).

Mr Gay’s comments were made in response to two serious collisions between cyclists and drivers on Sydney’s streets last week, one of them fatal. The implication of his comment was that licensing would be a way of reducing the incidence of such events significantly.

This is not a wildly unpopular idea, even among the Fairfax demographic. When the Sydney Morning Herald asked its readers in an on-line survey on Friday if cyclists should be required to have a license, 42% of 13,208 respondents answered ‘yes’.

If licensing really can make cycling on roads much safer then it warrants serious examination. The risk of death or serious injury is much higher for cyclists than it is for motorists and, moreover, is increasing much faster (see Is cycling more dangerous than driving?).

Something certainly needs to be done; and done urgently. But is licensing the answer? Would it achieve Mr Gay’s aims?

There are many problems with this idea. More than half of households (and 90% of those with children) own at least one bicycle. They’re unlikely to appreciate the cost and inconvenience of licensing each rider. It would be especially hard to design a workable licensing scheme given many riders are children.

But what makes it an especially silly idea is that it wouldn’t achieve Mr Gay’s objective of significantly reducing casualties. A study of car/bicycle crashes resulting in serious injury to the cyclist done last year by the Centre for Automotive Research found that, as assessed by the attending Police, the motorist was at fault in 79% of cases (see below). 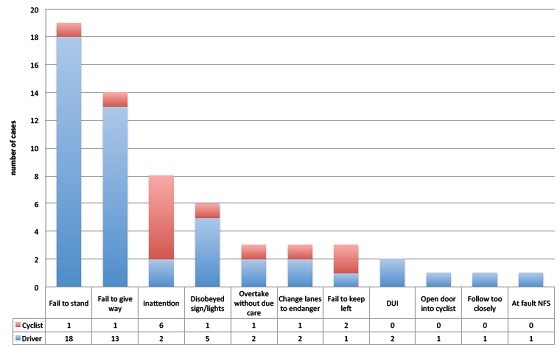 Another study found drivers are responsible for 87% of road “incidents” i.e. a near-crash where at least one party has to take evasive action. In 74% of those events the driver cut the cyclist off, turning in front of the cyclist without either providing enough space, indicating effectively or doing a head check.

The Automotive Research Centre’s study suggests compulsory testing of riding skills and knowledge of road rules wouldn’t do a lot to reduce casualties either. That’s because cyclists involved in crashes with cars tend to be highly experienced.

More than 85% of the centre’s sample reported they’d cycled regularly on public roads for at least the last three years before their crash. The median distance they said they rode was 10,000 km p.a. (95% more than 1,000 km p.a.) and 60% were riding a road/racing bike at the time of the accident (almost 70% were wearing cleated shoes).

These findings are consistent with a 2012 study done by the Monash University Accident Research Centre. Although it looked at injuries to cyclists from all crashes (not just collisions with cars) and also included less serious injuries, it found that 81% of injured cyclists had cycled at least 2-3 times in the week prior to their crash.

Licensing might not in any event have much impact on the riding behaviour of the sorts of cyclists who are most likely to be involved in crashes. The Monash study also found that over half of the sample reported they’d already had at least one crash in the preceding five years (34% reported at least two).

Mr Gay might imagine that licensing would give police and the courts a way of keeping delinquent cyclists off the roads i.e. revoking their license. But that only needs a law, not a bureaucratic program that places a burden on all existing and would-be cyclists (and it can probably done under the existing law in most jurisdictions anyway).

To be fair to Mr Gay, some of the other arguments against licensing that flooded social media since he made his comment are pretty weak. In particular, the contention that possession of a driver’s license obviates the need for a cyclist’s license overlooks two salient matters.

One is that the control and safety issues involved with two wheels are very different from those involved with four; that’s why separate licenses are required for motorcycles. The testing is usually more demanding too.

The other matter is that an increasing proportion of the population, but most especially younger people, don’t have a driver’s license. That’s likely to be especially true of the next cohort of prospective cyclists.

And Mr Gay can safely ignore some of the more overheated objections e.g. that licensing cyclists would be tantamount to licensing pedestrians.

But he can’t overlook the fact that licensing cyclists, like registering bicycles, would be poor policy. It’s unnecessary and, worse, would impose private and social costs for little or no benefit; indeed, it’s almost certain the benefits would be negative. (1)

If Mr Gay genuinely wants to reduce casualties while retaining the social benefits of cycling, he should be looking to provide much better infrastructure (both segregated and shared). He should also be thinking about root and branch reform of the road rules so the welfare of vulnerable road users is given primacy.

That can’t be achieved by loading the “costs” solely on to cyclists. Motorists will have to pay a lot more, especially in terms of foregone road space, slower speeds, and a dramatic weakening of the culture of rule-making that privileges their interests over non-motorised users.

1) It should be pointed out, though, that the popular claim that riding to work saves the economy $21 per trip only makes sense if it means a bicycle is used in lieu of a car; but the great majority of existing bicycle trips are for recreational purposes or are in lieu of public transport or walking. The claim should only be made in the context of what could potentially be achieved.

Alan Davies is a transport and urban development consultant. He blogs for Crikey on urban issues here.