The T-shirts say ‘Our patients deserve better’ and ‘Too few of us to care for you’.

It follows a move by RAH ED medicos last month – as revealed by InDaily – to wear protest T-shirts with slogans including ‘Hospital overcrowding harms you and me’ and ‘We need space to keep you safe’, with clinicians saying they are now working in “disaster” mode to treat patients in an overwhelmed system.

“Quite severe emotional and psychological trauma from having so many really sick people that need care who aren’t able to access it in a safe or timely way.”

Pope said an ongoing upgrade of the ED had not provided any relief.

“Things have got a lot worse because we’re having to work in areas and do things for which those areas are not designed,” he said.

“There’s an increase in crowding. We have patients literally shoulder-to-shoulder, separated if you’re lucky by a curtain.” 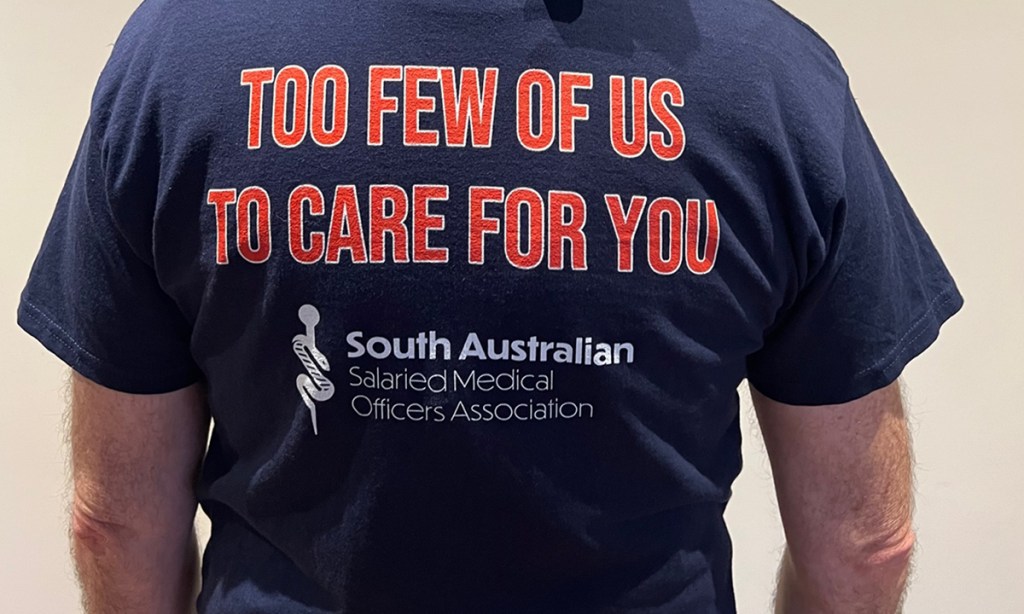 The back of the protest T-shirts. Photo: supplied

Pope said the waiting room was “way too small for the numbers of people in there”.

“They are collapsing in the waiting rooms. We don’t have enough staff to operate the (resuscitation) rooms safely.

“So far the hospital executive (is) not taking any reasonable steps to address these issues.”

Pope said that “most days over winter” the ED was crowded with 80-90 patients at any one time.

Winter illnesses including flu, RSV and COVID were contributing to the problem.

Pope said doctors would wear the protest T-shirts “until we get a resolution from our hospital executives so we can operate the emergency department safely for both staff and patients”.

Pope said the ED needed an increase of about 30 junior medical doctors, to lift numbers from about 46 to 75.

He said it wasn’t just the volume of patients creating stress but the seriousness of their illnesses.

“We are seeing high levels of very sick patients,” he said.

Health Minister Chris Picton told InDaily he had “no concerns with the wearing of these T-shirts because my priority is fixing the problem we both agree on”.

“There’s no doubt the Lyell McEwin emergency department, like our other hospitals, has been under significant pressure – both because of COVID and flu, but also because of a long-term lack of investment in providing the required beds and services,” he said in a statement.

“We are investing significant numbers of extra beds at LMH to address the access block, doubling our election commitment from 24 to 48 extra beds at the hospital.”

Picton said he had met with Lyell McEwin ED doctors “and listened in detail to their concerns”.

“I have tasked the NALHN (Northern Adelaide Local Health Network) Board and management with working with the emergency department clinicians on the best model of care for when the complete new ED opens early next year,” he said.

“The major emergency department redevelopment will increase capacity to 72 treatment spaces. This is a project that was planned and funded back in 2017 under the previous Labor Government, but was continually delayed by the former Liberal Government.”

“Out at the Lyell McEwin Hospital emergency department the issue is around sufficiency of medical staff… and the overwhelming overcrowding that’s occurring there at the present time,” she said.

“We have only just recently commenced working with NALHN to try and resolve some of these situations quickly.

“Certainly we’ve got the Minister’s support to try and get some resolution to the problems that are actually there.

“It’s poor planning, pre-dating the government, poor workforce planning and we’ve got people who are off furloughed…”

Opposition health spokesperson Ashton Hurn said “the former Liberal government listened to the concerns clinicians had about Labor’s plans for the ED redevelopment and took the time to get it right”.

“Our frontline health workers are dealing with unprecedented stress with ramping at a record high and our exhausted doctors and nurses are crying out for urgent help,” she said.

“Every day those cries get louder and louder and it’s appalling Chris Picton’s first instinct seems to be looking for someone else to blame.

“He must focus on delivering immediate solutions…”

In a statement, a spokesperson for the Northern Adelaide Local Health Network said “we recognise our hospitals, and the wider health system in South Australia, are under continued high levels of demand due to COVID-19, flu, winter demand and COVID-related workforce pressures”.

“We understand the concerns raised by our Emergency Department (ED) doctors and have strategies in place to improve flow and ensure our patients continue to receive the best possible care,” the spokesperson said.

“This includes prioritising discharges for patients where appropriate, reviewing elective surgery on a daily basis and the cancellation of non-essential meetings for clinicians.”

The spokesperson said NALHN was currently recruiting for additional trainee medical officers to work in its emergency departments.

“In consultation with our clinicians, we are always looking at strategies across NALHN to improve access to inpatient beds, including out of hospital strategies such as virtual care,” he said.

“We thank our hard-working staff for their ongoing commitment during this challenging period.”