Adelaide’s public hospitals are in their second week of deferring non-urgent overnight elective surgery in a bid to free up more hospital bed capacity to cope with the state’s wave of COVID-19 and flu cases.

Picton announced the four-week halt on Tuesday, July 19, and said it would be reviewed on a weekly basis.

The state government announced yesterday it had reached a deal with private hospitals to provide an additional 107 beds to the public health system on a temporary basis in a further bid to ease pressure on metropolitan hospitals.

Asked whether the acquisition could see the ban on non-urgent overnight elective surgery lifted, Picton said: “No, not at this stage – it’s too early to say.”

“What we did say when we announced these relatively modest, limited changes in terms of elective surgery was that it would be over a four-week period with a review on a weekly basis,” he told reporters on Thursday.

“It may well be that this additional capacity will enable us either to have some more of that surgery conducted in the private system or to resume more in the public system.

“But we’re still at a situation where we’re not being able to entertain that at this point in time, but that will continue to be reviewed over the coming weeks.”

Picton said last week that SA Health was estimating it needed to find an additional 40 beds every day out of the elective surgery workload to make sure hospitals could cope once COVID-19 hospitalisations peak.

There are currently 339 people with COVID-19 in hospital – down from 365 on Wednesday – with eight people in intensive care.

Modelling from the University of Adelaide has forecasted that South Australia could hit a peak of around 400 COVID hospitalisations sometime this week.

“We are confident that it seems to be tracking in line with the modelling that we’ve had,” Picton said yesterday.

“There’s a lag effect in terms of the hospitalisation impact of that, so even though its welcome to see that [case number] figure come slightly down today, it’s too early to be popping any champagne corks around that.”

South Australia recorded 3957 cases on Thursday – down from 4197 on Wednesday – and 17 historical COVID-19 deaths, including a woman in her 20s.

Meanwhile, Premier Peter Malinauskas has again dismissed calls to reintroduce a mask mandate and rejected suggestions the decision is for political reasons.

It comes amid a new campaign from the Australian Nursing and Midwifery Federation urging all people to get vaccinated, wear masks and take other measures to help reduce the strain on the hospital system.

Malinauskas said he welcomed the union’s campaign but stopped short of pushing for a wide-ranging mask mandate.

“We don’t see any state reintroducing a mask mandate, I’ve made it very clear that it is one of objectives to try and operate in a way that achieves national consistency when it comes to restrictions, including mask mandates,” he told reporters on Thursday.

Asked whether the decision was for popularity reasons, Malinauskas said: “I think when it comes to the subject of mask mandates, it is a highly divisive subject in the community.

“There are those that lust for it and those that can’t stand the idea of it.

“I don’t think there’s any option here that’s about picking political popularity, it’s about what the right thing to do is trying to get the balance right between what we’re seeking to achieve around relieving pressure on the health system versus people learning to live with COVID versus the economic implications of mandates at any time.”

Masks are still mandatory in high-risk settings such as hospitals and other health care services, pharmacies, disability and aged care services, public transport, and on planes. 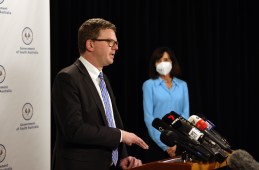 The “COVID-19 Direction Accountability and Oversight Committee”, chaired by Greens MLC Robert Simms, was formed as part of a crossbench deal with the government to pass amendments to the Public Health Act allowing COVID-19 restrictions to remain in place when the Major Emergency Declaration was revoked.