According to latest Australian Bureau of Statistics migration figures, 4000 international students arrived in South Australia in March, April and May.

While the March and April figures were still well down on pre-pandemic levels, the May figure of 1300 was on par with 2019, providing hope of a further boost in enrolments in semester two, which begins this week.

There were about 30,000 international students in South Australia when the federal government closed international borders in March 2020.

As of July 11 this year, Department of Home Affairs figures show there are 32,089 international students with visas to study in South Australia but 6167, or 19 per cent, were still overseas.

From a national perspective, there are still more than 100,000 international students offshore. Of those, 47 per cent are Chinese citizens.

However, lockdowns and travel restrictions in many parts of China have delayed the return of many students.

“Overall, we are seeing that students are coming back to Adelaide but what’s different about this year is the fact that the border opening at the beginning of the year meant that this year won’t follow the typical pattern of previous years,” she said.

“We have an airport welcome desk and we are seeing students starting to come off the planes so it is starting to return, which is great, but there is obviously still a gap between the pre-pandemic numbers and what we are seeing now.”

In 2019 the international education sector was South Australia’s largest export valued at $2.145 billion.

The latest ABS data shows the sector in SA was valued at $1.7 billion in the 2020-21 financial year.

While the fall in numbers has impacted the bottom line of major education providers, it has also significantly affected the local economy as less than 50 per cent of the student spend went on fees with the majority going towards accommodation, food, retail and entertainment spending.

“Those international students also go on to be ambassadors for the state – they travel, they attract their friends and families to visit the state.

“It’s showing signs of coming back and it’s good not only for the city of Adelaide, it’s good for the entire state.”

Before the pandemic, Chinese students accounted for about 35 per cent of South Australian international enrolments, which reached 44,000 in 2019.

In February 2020, just before the pandemic closed international borders,  there were 11,300 Chinese student visa holders enrolled to study in South Australia but 5878 were outside of Australia.

Now there are about 8660 Chinese student visa holders enrolled to study in South Australia with thousands of them still overseas. 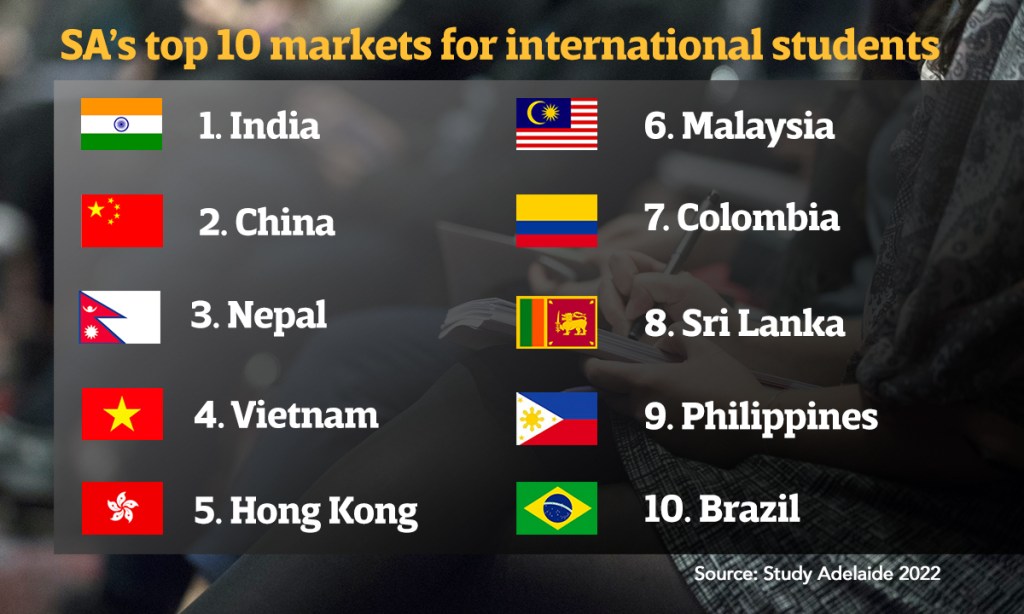 Johnston said many international students stuck overseas were able to start or continue their courses online with South Australian institutions during the pandemic, an option that was previously unavailable to many of them.

“There are still some students learning online though and we continue to engage with those students, as does the universities and providers but the large majority of students are coming back,” she said.

Enrolment numbers, which differ from student numbers because some students enrol in more than one course, show international student enrolments in South Australian institutions hit a record 44,100 in 2019 with 23,700 new course commencements.

The Federal Education Department figures for 2021 show there were 40,000 enrolments and 16,000 new course commencements.

The latest figures for this year are to the end of April and show there have been 29,000 enrolments in the first four months of 2022 including 9700 new course commencements.

Johnston said it was too early to say when international student numbers in SA would return to the record 2019 levels.

“Adelaide is a really attractive education destination but we are going to have to work collaboratively to bring those numbers back to where they were,” she said.

“There are strong and promising signs from our education institutions that demand is returning but it will take time.

“As they are arriving at the moment, it’s really important that we consider that we really need to welcome them into our community in Adelaide  – a smile or a wave can mean a lot to an international student who has chosen to move halfway around the world.”