Member for Giles Eddie Hughes told InDaily the government should consider reimposing a face mask mandate inside public places such as supermarkets, following the emergence of the new Omicron subvariants, BA.4 and BA.5.

Giles, who is based in Whyalla and whose electorate is the biggest in the state, said “it is not a big ask” to mandate the wearing of masks inside places that have the potential to be crowded, given experts say it could slow the spread of COVID-19.

“I think some people don’t realise how transmissible these latest variants are,” he said.

“I think it’s a sensible thing to do.

“I know people with pretty serious underlying health conditions in this community and one or two have been told if they do get the virus the odds are that they will die.

Health Minister Chris Picton has declined suggestions to reimpose a mask mandate, saying public health advice was to instead recommend their use.

Masks are still mandatory in high-risk settings such as hospitals and other health care services, pharmacies, disability and aged care services, public transport, and on planes.

Close contacts of positive COVID cases must also wear a mask when leaving their home.

Asked if he wanted the government to declare another emergency to impose a broader mask mandate, Giles said: “I’ll leave it to sharper minds than my own to determine how best to go about it”.

The backbencher said he hadn’t spoken to Picton about his concerns and was unsure whether other Labor MPs shared his views.

“The act in itself of wearing a mask I don’t think is a big ask, but then on the line legislative basis – that might well be a bigger ask,” he said.

“People are maybe getting mixed messages now, which, given the transmissibility of this particular couple of variants, that is a concern.”

He said the government was encouraging South Australians to wear masks, especially in indoor or crowded spaces when social distancing was not possible.

“An SA Health social media campaign is now underway to further reinforce our messaging to mask up and help reduce the rate of community transmission,” he said.

It comes as an SA Health dashboard showed there were no inpatient beds available across Adelaide hospitals earlier today.

The metropolitan hospital system can fit 2959 hospital inpatients, but at 12pm, the dashboard showed there were 2906 inpatients admitted and 130 patients who were stuck in emergency departments waiting for a bed.

Latest data, accurate as of 3pm, shows there were 2732 occupied beds and 115 patients waiting for a bed.

Meanwhile, at 3.30pm, a “code white” was declared for the Lyell McEwin, Queen Elizabeth, Royal Adelaide, Noarlunga and Modbury Hospitals, meaning that those emergency departments had all of their treatment rooms being used. 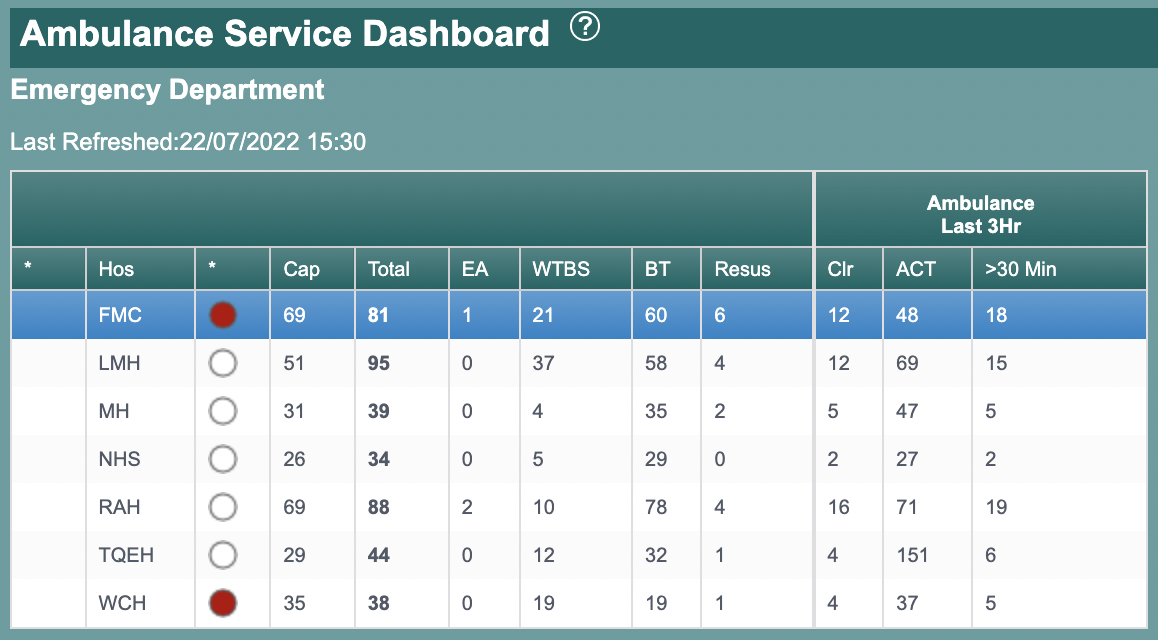 The SA Ambulance Employees’ Association tweeted yesterday that the Lyell McEwin Hospital in Adelaide’s north “rarely ramps”, but the spike in COVID cases resulted in some ambulances ramping for more than five hours.

COVID-19 cases in South Australia fell to 4374 today, but the number of people with the virus in hospital rose to a new record of 358, including 12 in intensive care.

University of Adelaide modelling released this week predicts “in excess of 400 hospitalisations” within the coming weeks, including people who are admitted because of their COVID infection, as well as those who are in hospital for other conditions but who incidentally have the virus.

Picton said since coming to government, Labor had opened up “every possible bed across the system” with work urgently underway to make more capacity.

He said more than 210 beds had opened up in the past couple of months.

“We now have the equivalent of a QEH (Queen Elizabeth Hospital)-sized number of COVID patients across the system and approximately 1000 staff furloughed due to COVID, which is clearly putting hospitals under huge pressure,” he said.

“Our doctors, nurses, ambos and other health staff are working as hard as possible to care for the patients who need urgent hospital care. All South Australians thank them for their incredible efforts at this difficult time.

“We call on all South Australians to play their part by wearing masks, getting tested when symptomatic, updating your vaccinations and only calling 000 or going to the ED when it is an emergency. And anyone older than 70 who tests positive can access antivirals to help keep them out hospital.”

All non-urgent overnight elective surgeries have been deferred across metropolitan hospitals over the next four weeks to free up 40 beds each day.

The government is also hoping to find additional beds in private and peri-urban hospitals, as well as find appropriate accommodation for about 120 National Disability Insurance Scheme clients who are in hospitals but ready for discharge.

“Ultimately this shows why we need more capacity in the health care system which is why we have allocated to create 550 additional beds in last month’s state budget,” Picton said.