Environment and Water Minister Tanya Plibersek on Tuesday said the Murray Darling Basin Agreement commitment to recover an additional 450 gigalitres of water for the environment by June 2024 was “next to impossible given where we are starting from and how far behind we are”.

Plibersek was speaking at the release of the five-yearly State of the Environment report, which found only two of the 450 gigalitres has been secured since 2013.

University of Adelaide water economics expert Professor Sarah Wheeler said a failure to achieve the target would have serious consequences for South Australia.

“SA being at the bottom of the river, well, rivers die from the mouth up and we see all the problems first,” she said.

Wheeler said a failure to the amount of water to the environment envisaged under the plan could see the Murray fail to flow out to sea again, as happened in previous times of drought.

“Healthy fisheries need inland water coming out to sea, and it would increase river salinity, with implications for urban water use and increased treatment cost of water for Adelaide,” Wheeler said. “It also represents an increased cost for irrigators and implications for the health of crops.”

Wheeler added that although Plibersek was right to say the target was difficult under current criteria, it would be achievable if the federal government passed legislation to lift limits on water buybacks introduced by the former Coalition government.

“It’s just asking irrigators ‘do you want to sell your water, we will pay market rates’ — voluntary tenders for whoever wants to sell the water, it’s very easy,” Wheeler said.

State Environment and Water Minister Susan Close on Tuesday rejected Plibersek’s claim the target was close to impossible to reach, agreeing that a lift on caps on water buybacks would make it achievable.

“In the early days of the Basin Plan, similar volumes were recovered within a two-year period using both buybacks and efficiency programs,” Close said.

Humphrey Howie, Presiding Member of the Renmark Irrigation Trust, told InDaily that directly offering incentives for water infrastructure in exchange for water buybacks could bring more growers on board.

Howie, a citrus grower, said members of the trust had benefited greatly from previous buyback schemes and that growers of stonefruit crops are particularly vulnerable to salinity issues.

“The trust as a whole, its members have sold back 23% of their entire water entitlements for environmental purposes, and it has allowed many of our members to upgrade their infrastructure,” he said.

“We live in a market-oriented world, so if growers are willing to sell water at the right price, why should they be prevented?”

Conservation SA Healthy Rivers Campaigner Kate McBride told InDaily that fish and birdlife that rely on wetland ecosystems such as the Coorong were particularly vulnerable if the target is not reached.

“The environmental buybacks are often branded SA’s water, but really it is for the health of the entire basin,” McBride said.

“It is important for flood plains and wetlands … like the Coorong, which is already sick even in what is considered a good time for the river system, particularly with climate change, sea level rise and associated salinity issues.” 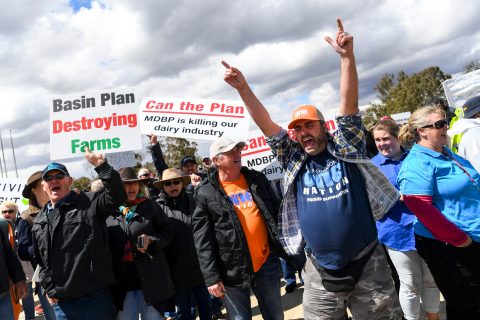 Upstream irrigators and farmers call for the Murray-Darling Basin Plan to be axed. Photo: AAP/Lukas Coch

Opposition water spokesman Perin Davey on Tuesday said that Plibersek should extend the 2024 deadline and that any attempt to reach it would deliver negative economic and social impacts in communities that rely on the river.

Davey, who unsuccessfully led an attempt to scrap the 450 gigalitre commitment in the Senate last year, said Plibersek “was focusing on one part of a complex plan and ignoring the lessons learned and outcomes being achieved”.