Widespread rain has eased for Sydney and the NSW Central Coast, but the wet weather and risk of flooding has now moved to the Hunter and state’s north, with an evacuation order issued for Singleton.

A contingent of 26 SA State Emergency Service workers has been seconded to the region, consisting of Storm Crew, Swiftwater Rescue and Incident Management Team personnel, departing Adelaide this afternoon.

Acting SA SES Chief Officer Liz Connell said: “We will continue to respond to requests for support from our sister organisation in NSW for as long as we are needed.”

“And we know they will always be there if we need them,” she added.

“Emergency services personnel share the same dedication to community, commitment to helping others and concern for those in crisis… the floods in New South Wales have had a devastating impact on individuals and communities across a wide area.

“With further heavy rain forecast in coming days our thoughts are with those who have already lost so much.’’

NSW Transport officials said the New England Highway remained closed at Singleton and Maitland due to flooding, with the Bureau of Meteorology saying river levels in the town were likely to exceed the March 2022 flood level of 13.15 metres and may reach 13.80 metres.

Electricity provider Ausgrid is warning residents that power could be cut off from the town as it battles to restore electricity to approximately 3000 customers in parts of the Central Coast, Lake Macquarie and pockets of Sydney.

There are also evacuation orders for several Hunter Valley towns in place including Bulga, Broke, Wollombi and Dunolly.

Meanwhile, a severe weather warning was last night issued for the mid-north coast and Northern Tablelands, with flash flooding and heavy rainfall expected.

With rain easing in Sydney, and as the clean-up and assessment of significant damage begins, residents have been told they can return to their homes in Lansvale, Moorebank and Chipping Norton in the city’s southwest.

Prime Minister Anthony Albanese has announced disaster recovery payments of $1000 for eligible adults and $400 for children, with applications opening this afternoon. 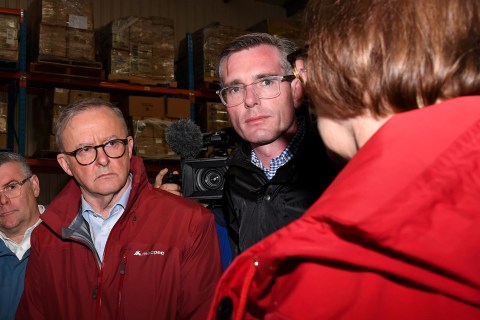 Albanese and NSW Premier Dominic Perrottet yesterday visited deluged parts of the Hawkesbury, a region that has endured four floods in the past 18 months.

The weather bureau is predicting severe weather to ease on Thursday as a low-pressure system tracks out to sea.