The airport’s management expects 30,000 people to come through its terminal on Friday, coinciding with the start of term 2 school holidays.

It would surpass the previous pandemic record of around 26,000 people who walked through the airport’s doors on Easter Monday.

Adelaide Airport CEO Brenton Cox reiterated a warning for travellers to arrive two hours before departure for their domestic flights and three hours for international flights to help avoid delays.

“Our security and customer care teams will be at full capacity to help facilitate customers from kerb to gate – we anticipate that check-in and security queues will be longer than people may have been previously used to,” he said in a statement.

He told ABC Radio Adelaide this morning that companies and subcontractors within the airport are trying to fill around 500 jobs.

“Not just us, but most of the aviation community still rebuilding those workforces,” he said.

“So for example the security subcontractor has increased by about 40 per cent, but we’re still about a third off the ideal workforce size.

“It just takes some time to train people up. It’s probably a little less about recruitment and more around training time.”

He also said the airport was anticipating traffic levels to build all the way through the school holidays until July 22.

“Friday is expected to be the first busiest day but then actually every Monday, Tuesday, Friday for the two weeks following will also be very busy,” he said.

“The busiest day we’re expecting is right towards the end at 22nd of July.”

The forecast traffic increase comes amid an expansion of the airport’s international travel offering, with Fiji Airways and Air New Zealand both recommencing routes to Adelaide today. 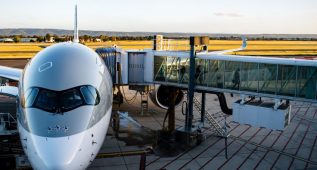 Travel demand is bouncing back strongly across the world. More than 2.49 million passengers went through security checkpoints at US airports on Friday, surpassing the previous pandemic-era record of 2.46 million reached earlier in the week, according to figures released on Saturday by the Transportation Security Administration (TSA).