The South Australian Salaried Medical Officers Association said doctors in the Royal Adelaide Hospital emergency department would from today be wearing T-shirts featuring phrases such as “Hospital overcrowding harms you and me” and “We need space to keep you safe”.

That’s despite the Central Adelaide Local Health Network taking action in the SA Employment Tribunal last month to stop the protest, which is part of a broader industrial action planned by the union.

SASMOA says it is due to face another employment tribunal hearing with employers on Friday to discuss “other industrial actions” that will “not impact patients but will draw attention to the problems the system faces”.

The union’s chief industrial officer Bernadette Mulholland called for “accountability and change in the upper echelons of health management”.

“This is impacting now on every frontline health worker in our hospitals and on their patients most visibly by the situation with ramping and in our Emergency Departments,” she said in a statement.

“Doctors understand that the current State Government is committed to addressing the major problems facing the health system and the specific problems in the Royal Adelaide Hospital Emergency Department, but it is now a health system in survival mode and if the clinicians had been listened to over the years it would never have come to this.” 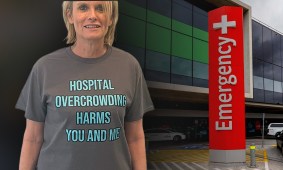 “My preference is to negotiate, or even better, to proactively work with clinicians to resolve problems rather than ending up in a situation where people feel that they have to take this action,” he said on June 22.