Donald Neil Kerley, who turned 88 in February, was known generally as Neil and colloquially as ‘Knuckles’ – a nickname that at once captured his famed grit and endearing larrikinism.

Police said last night that they were called to the scene of an accident on Mallee Road at Walker Flat just before 5.30pm after being notified that a Toyota station wagon towing a trailer had left the road and crashed through a fence into a paddock.

Kerley, the driver and sole occupant, died at the scene.

The news has prompted emotional tributes to his character and legacy, having won four SANFL flags at three clubs across three decades as a player and coach. 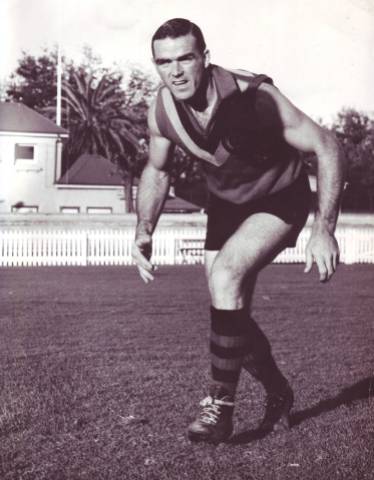 More than half his 275 SANFL games as a player were spent at West Adelaide where he was a four-time best and fairest and became a fixture of the South Australian team.

After three losing grand finals, Kerley was appointed player-coach in 1961, leading the Bloods to their first flag since 1947 with a win over Norwood.

In 1964, having been replaced as coach after a narrow grand final loss in 1962, Kerley took over reigning wooden spooners South Adelaide, cementing his place in football folklore by taking them to a premiership in his first season.

He then managed a similar feat at Glenelg, who he led from last-place to finals within one season, before – as coach in 1973 – taking the Bays to their first flag since 1934. 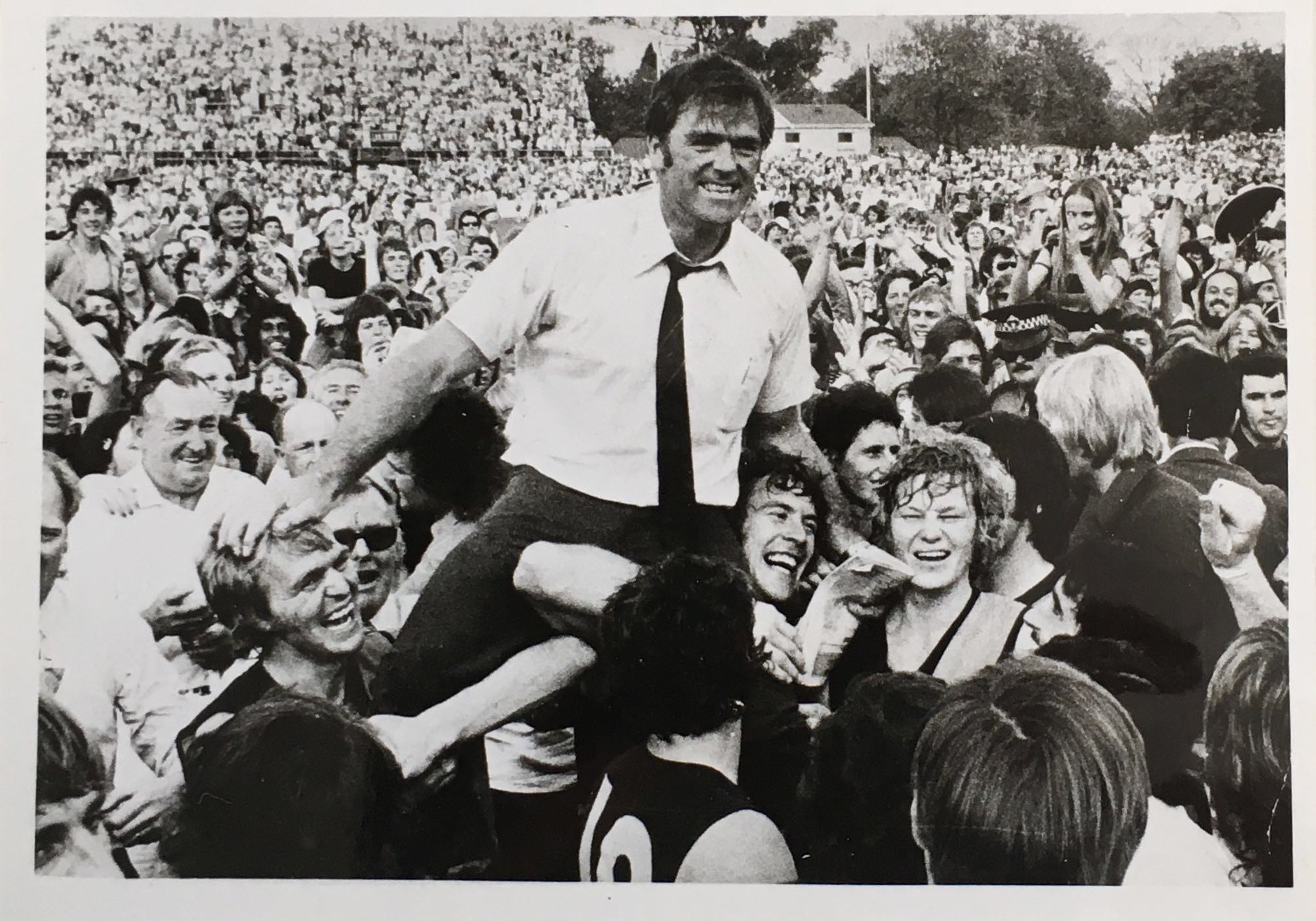 Kerley is chaired from the ground after Glenelg’s grand final win. Photo: SANFL

After a stint at West Torrens, where he restored some competitiveness without repeating his premiership heroics, Kerley returned to West Adelaide, where he won the 1983 SANFL decider – his fourth flag across three clubs.

He continued his involvement with the game, helming Centrals in the late 1980s and returning to the Bloods in the ’90s.

He was also influential in the formation of the state’s first AFL side, serving as the Adelaide Crows’ first football manager.

The club’s chairman John Olsen said today Kerley’s “contribution to the game is immeasurable and he embodied what it means to be a proud and passionate South Australian”.

“As a player and coach, he was tough and uncompromising and he commanded respect, and he will be remembered as one of football’s great characters.

“In the context of his overall career, his time at the Crows was brief but his impact is best described as significant given he helped build the Club from the ground up.”

In a statement, the Port Adelaide Football Club said Kerley was “always greatly respected as a fierce adversary as both a player and coach… the ultimate competitor who displayed skill and strength throughout the golden decades of South Australian football”. 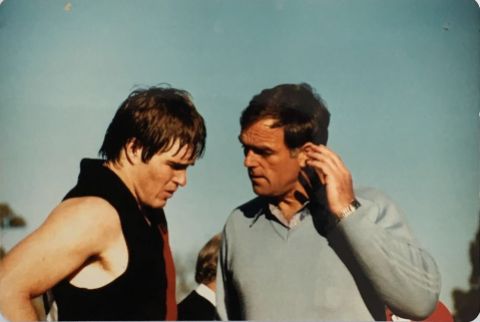 He was known outside SA as a mainstay of State of Origin fixtures and a colourful commentator of the national competition, and his death prompted immediate tributes from contemporaries in both sport and media, and fans alike – who remembered him as ‘the King’ of SA football.

Donald Neil Kerley ?Kerls .
Kerls was inspirational, a leader of men , a hard fearless player & coach in the @SANFL and for @southaustralia
Kerls was a lifelong friend.
To Barb, Gail & their extended family our sincere condolences. pic.twitter.com/gAqksYb2rY

A true South Australian icon has left us. Neil ‘Knuckles’ Kerley was a giant football figure. Legendary player and coach at @SANFL club and state level, crucial contributor to the @Adelaide_FC in its infancy and fab story teller. A great
in the Australian Football Hall of Fame pic.twitter.com/91Bl7dXkHX

So sad to hear of the passing of a genuine SA footy icon. Neil Kerley was an old-school hard man who represented our state on the field, in the coaches box & in the media with great aplomb. Tough but had a sense of humour. Tragic news.pic.twitter.com/3lTnhszZkK#weflyasone
?????

NEIL KERLEY – The King. Very few gave so much – in so many places – to South Australian and Australian football. The throne will never see another Neil Kerley. pic.twitter.com/InCiE6srZe

The Glenelg Football Club is shocked and absolutely devastated to hear that Tiger legend Neil Kerley passed away late this afternoon.

Our hearts go out to his family, friends and the entire SA Football community during this time of mourning.

A giant of Australian Rules pic.twitter.com/rupZhWtd5d

“Donald Neil Kerley AM made a huge contribution to not only SA footy but Australian football, on and off the field,” he said in a statement.

“He was a passionate and proud South Australian, the embodiment of state pride.

“His character and courage made him a legend among the South Australian public.

“He was a tough competitor on the field, an inspirational coach and a fantastic ambassador for football, especially State of Origin.” 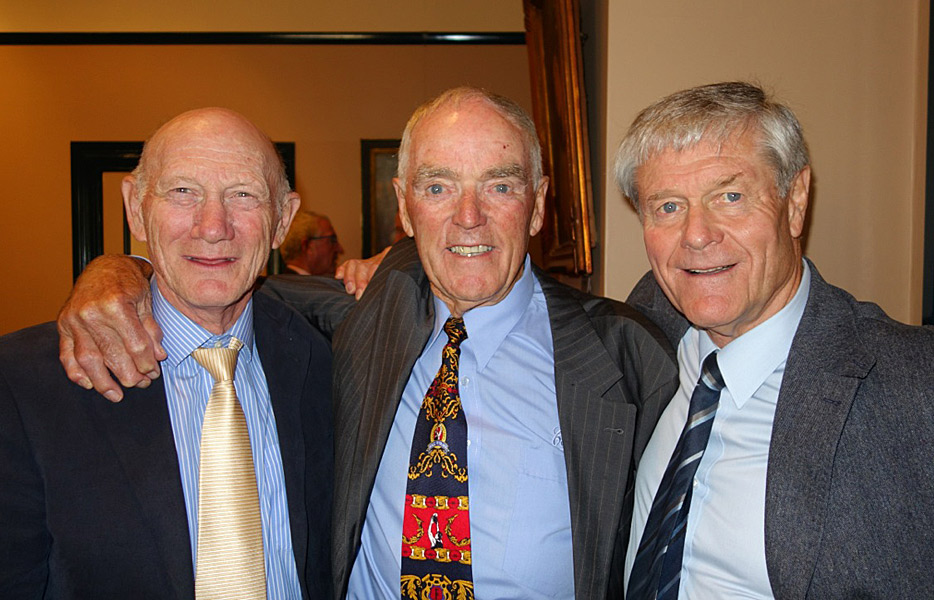 Kerley at his 80th birthday celebrations in 2014, with Kevin Bartlett and David Parkin.

Malinauskas said the 1997 AFL Hall of Fame inductee was “a football legend to South Australians – but to his family, he was so much more”.

“On behalf of the Government I extend my sincere sympathies to Neil’s family and friends,” he said.

Kerley is survived by his wife Barbara, who he married in 1955.