Bowen, who had been seconded to Adelaide from WA Police, died of horrific injuries, while Wallis survived, but died in 2018 without seeing the case resolved.

Perre – sporting a beard and long hair, and with his arm in a sling – was impassive in the dock when the verdict was announced, but Channel 9 reported he later suffered a medical episode after being removed to the holding cells in the Supreme Court building, with an ambulance called to take him for treatment.

His lawyer Gilbert Aitken declined to comment on the nature of the episode or how his client was faring.

#EXCLUSIVE: Domenic Perre has been rushed to hospital, just moments after being found guilty of the 1994 NCA bombing.

However, he indicated the conviction would be appealed, pending analysis of the Nicholson’s 530-page judgement.

“We’ve got to read the judgement – it’s a 500-page judgement – and see if there is [the opportunity to appeal] and if there is, that’s absolutely what we’ll recommend,” he said.

That was echoed by Perre’s family, with his son Anthony telling reporters as he left court he was “obviously disappointed”.

“We’ll wait for counsel to consider the judgement and we expect the appeal process to take its place,” he said.

Asked whether there would definitely be an appeal, he added: “Until counsel has read the judgement I can’t be confident of anything.”

After the guilty verdict was handed down, David Gorton – the brother of Bowen’s widow Jane Bowen-Sutton – spoke on behalf of the family, saying that “despite the years which have passed since 1994, justice has been served today”.

“This crime was and remains unprecedented in its violence against law enforcement in Australia,” he said.

“On behalf of Jane, Simon, Matthew and the broader family, we offer heartfelt wishes to the Wallis family – we hope today’s verdict will provide some comfort to you, and that Peter may finally rest in peace.”

Wallis’s daughter Genevieve told reporters there was “no doubt” her father “was a different person in the aftermath of the bombing”, saying: “It’s our greatest sadness that he’s not here today.”

“Peter Wallis was a lawyer – he was also our dad,” she said.

“He was a son, a brother, a colleague, a friend and a partner… his life was inconceivably changed on the 2nd of March, 1994, while investigating organised crime.

“As a result of the bombing, Dad lost his great mate Geoff, his career was cut short and he battled daily with the profound physical and emotional scars.”

She said that “as a lawyer and as a human he valued truth and justice above all else” and despite not living to see Perre convicted “he found great solace in the commitment of the SA Police” and other authorities continuing to investigate the bombing.

Premier Peter Malinauskas said Perre’s conviction “serves as a welcome relief to the families of so many South Australians, but none more so than the families of Geoffrey Bowen and Peter Wallis”.

He said the 1994 letter-bomb “shocked a lot of people when it happened”, calling it a “horrific crime and an absolute tragedy that affected good South Australians serving our community”.

“I would like to applaud the work of SA Police for their tireless efforts in ensuring Mr Perre has been brought to justice,” he said.

“Committing any crime means that people should be held to account, but that’s particularly true when we see innocent lives of people in law enforcement being tragically taken away by a criminal act.” 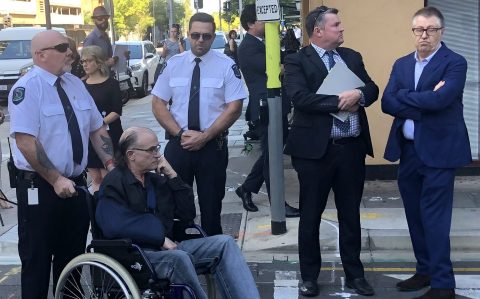 Major crime detective superintendent Des Bray declared that “today Domenic Perre has finally been held accountable for the terrible crimes he committed in 1994”.

“It’s impossible to imagine the grief that has been inflicted on these families, which has stayed with them for decades,” he said.

“Today’s verdict doesn’t do anything to diminish the pain and loss.

“Sadly, Peter passed away in 2018 – but I know that he was very happy that we’d agreed to commence the investigation and I’m certain he’d be very happy with the result today.”