Released this morning, the Australian Bureau of Statistics data from the 2021 census shows the number of people counted as usual residents of South Australia (SA) was 1.8 million, up from 1.7 million in 2016.

About 1.4 million people – almost 80 per cent of the state’s population – now live in Greater Adelaide.

The median age for people from SA has been on the rise for the past 50 years.

The median age was higher in SA than in the other five mainland states, with NSW the next oldest on 39 and Victoria, Queensland and Western Australia all 38 years.

The territories were the most youthful; the median age in the NT was just 33 years followed by 35 in the ACT, but Tasmania’s median age was the highest at 42.

South Australia is also the sickest of the mainland states, with 42.1 per cent of SA respondents reporting at least one long-term medical condition. This was above the national average of 39.8 per cent and higher than any other mainland state.

South Australia had a higher percentage than the national average in every category except for kidney disease, which was on par with the national figure.

This represented 45.3 per cent of the population, well above the national average of 38.4 per cent and higher than any other mainland state.

Christianity remains the nation’s most prevalent religion, with 43.9 per cent of people identifying with the denomination.

However, the figure has fallen from more than 60 per cent a decade earlier.

In the 2021 Census, 43,000 people in South Australia identified as being of Aboriginal and/or Torres Strait Islander origin, making up 2.4 per cent of the SA population. This was an increase from 34,000 counted in 2016, and lower than the Australian percentage of 3.2 per cent in 2021.

Most people in SA were born in Australia, but the proportion of people  born overseas has increased over time. 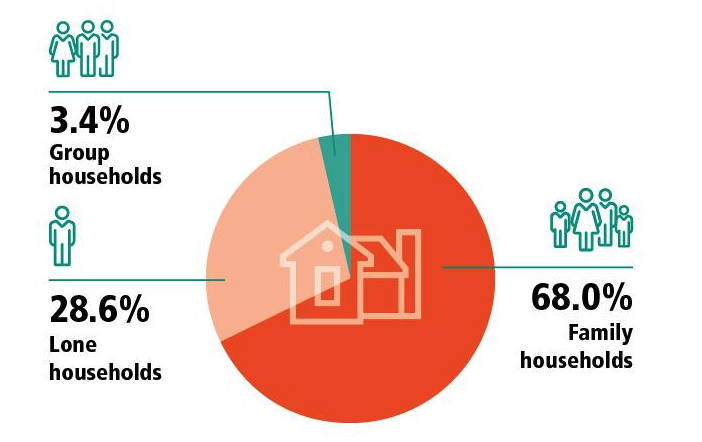 South Australian households have shrunk significantly over the past 50 years.

In 2021, most people lived in houses (78.0 per cent), rather than units, apartments or other dwelling types.

The proportion of people who lived in flats or apartments also increased from 6.6 per cent in 2016 to 6.8 per cent.

“Every stat tells a story, and today we are sharing a glimpse into the stories of almost 25.5 million Australians,” he said.

“The census was conducted at an unprecedented time in Australia’s history and provides a unique snapshot of the population during the COVID-19 pandemic, which is different from previous censuses.”