Development consultants Future Urban are seeking planning consent for a 16-storey, 53-metre building at the rear of the state heritage-listed King’s Head Hotel.

The proposed tower, which includes 36 serviced apartments, a penthouse suite, a ground-floor commercial tenancy and level one hotel function area, will require the demolition of the rear two-storey wing of the circa-1870s pub.

The hotel’s historic frontage on the corner of King William and Sturt Street will be retained and the pub owner intends to keep the King’s Head operating as a live music venue, integrating it with the new function area on level one of the proposed tower. 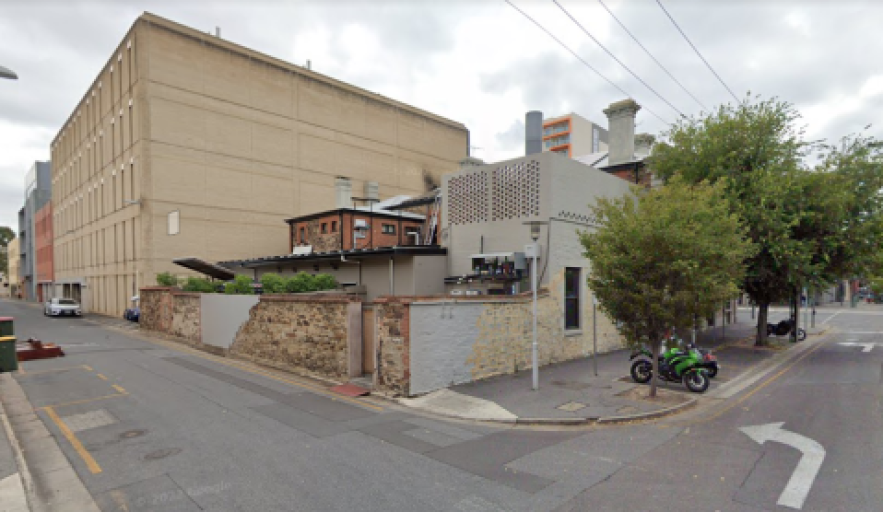 The development and demolition plan, lodged in March, has now received approval from Heritage SA, subject to conditions. The Adelaide City Council is also not opposed to the project.

But South Australian Government Architect Kirsteen Mackay listed a number of concerns with the development despite offering in-principle support.

Mackay submitted a series of recommendations to the developer to improve the tower’s layout and design, after expressing concerns about “potential conflict between hotel patrons and residents”. 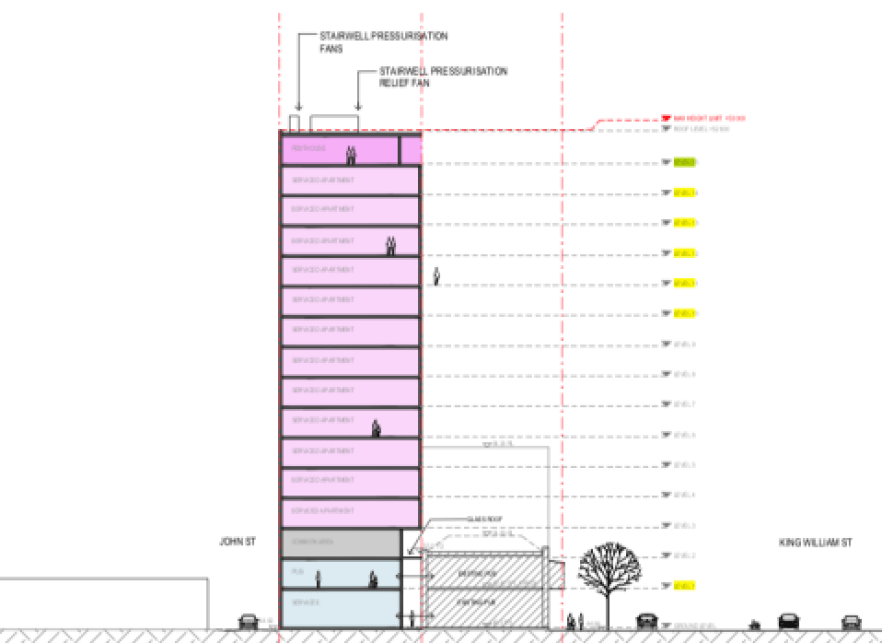 A floor-by-floor diagram of the proposed King’s Head redevelopment.

“In principle, I support the approach to connect the developments and revitalise the currently unutilised first floor of the King’s Head Hotel,” she said.

“However, the intent for the future stages has not been demonstrated and I am concerned that the functional and operational requirements for the hotel are conflicting with this proposal.

“I recommend review of the design approach to deliver an integrated development that combines the application for the tower as well as the internal upgrades to the hotel and conservation works to the SHP (state heritage place).”

Mackay also said the plans “do not demonstrate the proposed movement and operational strategy” between the King’s Head and the commercial tenancy space on the ground floor of the new tower.

“Therefore, I am not yet convinced by the access arrangement and the potential for interconnectivity, which appears restricted due to the existing adjacent spaces of the hotel and the location of the proposed structural elements,” she wrote.

“I am also concerned by the potential conflict between hotel patrons and residents.

“I recommend review of the ground floor configuration and internal planning, with the view to create a genuinely interconnected and open ground floor with a welcoming and generous entry, commensurate with the envisaged residential offering.” 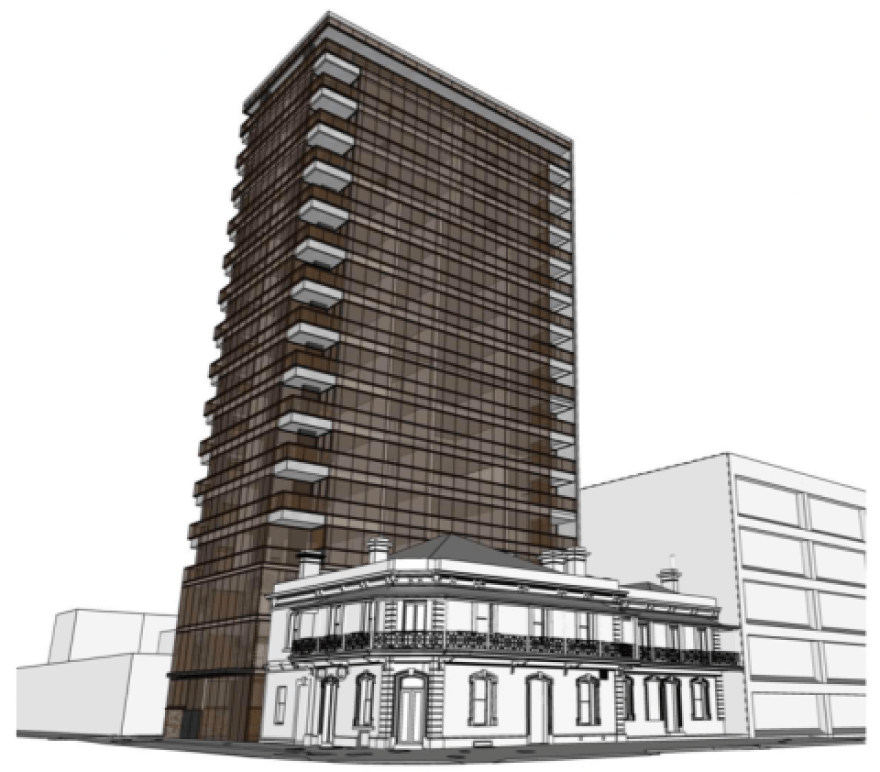 It comes as a community petition opposing the development has now passed 200 signatures.

Petition organiser David Beattie, who lives in one of four blocks of apartments located behind the King’s Head, said he is concerned about the new development shadowing solar panels, creating extra traffic with no extra parking, and resulting in greater noise emanating from the connected pub-tower concept.

“At the moment they do live music in the front bar which hasn’t been a problem … the sound goes out on King William Street,” he said.

“One of our concerns is that their new live venue is going to be higher up and it’s going to be on exactly the same floor as all our bedrooms.

“There’s going to be 100 bedrooms of exactly the same height with no real blocking of where the new live venue will be.”

A local resident for 17 years, Beattie said many of those signing the petition lived adjacent to the proposed development.

Beattie has sent the petition to Planning Minister Nick Champion and the State Commision Assessment Panel (SCAP) – the planning body which will eventually assess the project.

In a separate submission to PlanSA, Beattie listed “increased noise” from “music, collections, deliveries, waste bins plus construction work next to existing homes” among his objections to the development.

But Future Urban associate director Jason Cattonar said a report by engineering consultants BESTEC provided recommendations on “noise attenuation methods” which should be incorporated into the King’s Head development.

“BESTEC confirm that adoption of such methods will appropriately manage noise in line with the EPA’s standards as detailed in Environment Protection (Noise) Policy,” Cattanor said in a statement.

“We expect these recommendations to be included as conditions if planning consent is granted by the SCAP.”

Cattonar added: “Notwithstanding, live/amplified music is an historical, and key entertainment feature of the King’s Head Hotel.”

“As such, live/amplified music, being a regular occurrence, would continue to occur irrespective of whether this proposal is approved.”

Cattonar also said that the concerns raised by the Government Architect about “potential conflicts” between apartment residents and hotel patrons are “not about noise”.

“Rather it is about access management and ensuring there is controlled access across all building levels to prevent hotel patrons from wandering aimlessly through the serviced apartment levels,” he said.

“Patron/guest access will be further addressed through negotiations with the serviced apartment operator and the publican.”

“The shadow diagrams confirm that the tower, whilst causing some shadow during the early hours of the morning, maintains direct sunlight access to adjoining (western) residences in excess of the relevant guidelines in Planning and Design Code,” he said.

The view of the proposed development from the City South tram station on King William Street. Image: Future Urban

The State Government’s heritage body says it is not opposed to the demolition of the rear of the King’s Head, despite conceding the 16-storey tower standing in its place will “dominate” views of the historic pub.

In a submission to the SCAP on June 10, the agency said the development plan and rear demolition are “considered to be acceptable” and the bluestone section of the King’s Head targeted for removal is “substantially compromised”.

“There is little fabric left in this section of the Hotel to understand/illustrate the significance of the State Heritage Place,” Heritage SA’s principal heritage conservation architect Michael Queale wrote.

“Heritage SA does not oppose the abovementioned demolition work in this instance, as substantial conservation work is proposed to the exterior and interior of the State Heritage Place as a part of the project works, ensuring ongoing conservation and appreciation of the heritage values of the place.”

Queale, acting as a delegate for Heritage Minister Susan Close, did however concede the proposed apartment tower “is of significant scale and will impact on the setting and dominate views of the State Heritage Place”.

“This impact has been sufficiently mitigated by the design team though through the design treatment of the façade, to minimise visual distraction within the setting of the hotel,” he wrote.

“Further, the tower is located adjacent the significant section of the Hotel, rather than within the footprint of the Hotel, allowing clear understanding of the original scale, footprint and architectural features of the State Heritage Place.”

Heritage SA’s submission to the SCAP comes after the proponents of the King’s Head project engaged Adelaide firm Hosking Willis Architecture to prepare a Heritage Impact Assessment of the development.

Hosking Willis concluded the development “will not detract from the history, integrity, presentation, character or heritage value of the King’s Head Hotel” and argued the tower would “make a positive contribution to the place by responding to the design of the original Hotel and complementing the appearance and character of the place”.

However, the firm conceded the proposal “will have some physical impact and limited visual impact on the external appearance or heritage value of the Hotel”, particularly the setting of the hotel on Sturt Street which will be “considerably altered”.

“The proposed apartment building will have a considerable impact on the setting of the Hotel; however, the proposed new building has been carefully designed to complement the form and appearance of the hotel,” the impact assessment states.

Mock up of the “considerably altered” view of the King’s Head from Sturt Street. Image: Future Urban

“The proposed alterations and additions to the original Hotel will ensure that the majority of the original 1876 building is retained to a degree which will support its ongoing function and viability.

“This will maintain and enhance the understanding and heritage value of the place and ultimately enable its ongoing conservation.”

Hosking Willis also stated that the demolition of “some existing lean-to structure and additions to the rear of the hotel” will see the removal of “some original fabric” but said these elements “are considered to be of lesser heritage value due to their compromised integrity and condition”.

“Where there is some loss, it is confined to either elements of poor condition or integrity or of a lesser contributory nature,” the report stated.

“Their removal will enable an additional building which support the ongoing use and conservation of the original building.”

The SCAP is yet to set a date to assess the development.