Opposition health spokesperson Ashton Hurn told reporters on Tuesday that the state government “quietly dropped” the scheme after the state’s emergency management declaration ended in May.

She said under the scheme, frontline health workers such as doctors and nurses received free public car parking across all metropolitan hospitals as a “small gesture of thanks” for their work.

“Now it appears in the darkness of night Peter Malinauskas and the Labor party have quietly dropped this scheme,” she said.

“Whilst we know that the emergency declaration has ended, the pressure on our health system and on our frontline workers hasn’t.

“Cost of living is front and centre for many people in South Australia, so this is a real kick in the guts and we’re calling on Peter Malinauskas to reverse it.”

Heath Minister Chris Picton told parliament last week that the parking scheme was abandoned once the emergency declaration was revoked.

He told reporters on Tuesday that the government had invested in additional doctors, nurses, paramedics and hospital beds to reduce pressure on staff “who are really under the pump”.

“This is yet more crocodile tears from the Liberal party who are the ones who put this rule about the emergency management direction in place and ones who increased the hospital car parks,” he said. 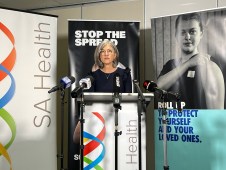 Scramble for hospital beds as COVID cases tipped to peak

She said modelling by the University of Adelaide showed daily cases peaking at around 4-5000 by July 12, spurred by the new BA.5 Omicron subvariant.

The modelling also predicts about 150 people would be hospitalised for COVID during the peak.

Currently, there are 230 people with COVID in hospital, but this includes people in hospital for other reasons who incidentally have COVID.