AGL Energy has teamed up with several high-profile industry partners to work up a study to demonstrate the commercial and technical feasibility of establishing a renewable hydrogen hub at Torrens Island.

Announced this morning, the study will also assess the viability of hydrogen-derived product manufacture at Torrens Island to serve domestic users in South Australia and interstate, as well as wider export markets.

AGL has been reducing its gas-fired electricity production at Torrens Island, near Port Adelaide, in recent years with the retirement of its four 120MW ‘A’ units and the mothballing of the first of four 200MW ‘B’ units last October.

However, in February it announced it had begun construction of a 250MW grid-scale battery at Torrens Island, which is the first in its planned 850MW storage network.

“This is another big step forward in AGL’s vision for an industrial energy hub at the site of our Torrens Island Power Station and we are coming closer to repurpose the site,” he said.

“With the strong support of large industry partners, AGL’s vision is to establish a clean hydrogen industry in Adelaide, and support the creation of an energy-efficient, low-carbon ecosystem and circular economy.”

It follows the Malinauskas Government’s plan to build its own $593 million hydrogen plant near Whyalla, which forms a major plank in its Hydrogen Jobs Plan.

The project, which was a Labor pre-election promise, is set to include a 250MWe hydrogen electrolyser, a 200MW combined cycle gas turbine generator principally fuelled by hydrogen and a 3600-tonne hydrogen storage facility that will equate to one of the world’s biggest hydrogen power plants.

The state government has also committed to developing an industry-led hydrogen hub at Port Bonython, previously announced by the Marshall and Morrison governments.

“South Australia is emerging as a leader in the development of a hydrogen industry, led by a major investment in the sector by the State Government,” Brokhof said.

“AGL very much wants to be a key part of the future of hydrogen in this state.

“This project also demonstrates the long-term investment AGL is making in the future of Torrens Island to transform the site to an integrated industrial energy hub.

“This also follows the completion of Barker Inlet Power Station, which has the potential to utilise green hydrogen manufactured at the site.”

The AGL feasibility study, being carried out by GHD Advisory, will map key operational and commercial plans for the project, outline the development of a production timeline and is expected to be completed by the end of the year.

The listed company has signed Memorandums of Understanding with seven industry partners across multiple sectors.

The hydrogen study is the latest in a series of AGL plans to reduce its reliance on fossil fuels.

The company had planned to split its retail and generation arms into two separate listed entities but last month ditched the plan following strong opposition from tech billionaire Mike Cannon-Brookes.

AGL had already spent $160 million planning the demerger, which included spinning off its coal-fired plants but  Cannon-Brookes managed to torpedo it on climate grounds after acquiring an 11.28 per cent stake in the utility.

The hydrogen study also comes at a time when the energy market is desperately seeking solutions to spiralling gas prices that threaten to derail the electricity network.

The issues are being amplified by extended outages at two of AGL’s major coal-fired plants – Loy Yang A in Victoria and Bayswater in NSW.

AGL says the Torrens Hub has the potential for broader energy security benefits and to provide grid stability for South Australia while supporting Australia’s broader efforts towards decarbonisation. 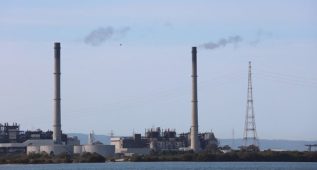 “Whether it’s the early potential for co-firing hydrogen with our existing gas engines at Barker Inlet Power Station, the creation of 100 per cent green gas networks for industry, or the development of low-carbon chemicals and future fuels right through to the production of green hydrogen for export, this feasibility study will explore it all.”

The Torrens Island ‘A’ station’s four 120MW generating units began operating in 1967 with the 800MW ‘B’ station’s four units coming into service in 1976. It is South Australia’s last remaining baseload power generation site.