The Fair Work Commission unveiled its decision on Wednesday, as inflationary pressures and the increasing cost of living continue to strain household budgets.

Business SA this afternoon described the wage increase as “another blow for many South Australian business owners”, warning employers would have to fork out an additional $518 million to comply with the changes.

It said those costs would likely be passed on to the consumer and could result in job losses.

“In South Australia, there are nearly 12,000 workers on the national minimum wage and 174,000 award-reliant employees impacted by these increases today,” the organisation’s policy and advocacy director Kendall Crowe said.

It follows warnings employers could face a potential increase to the ReturnToWork premium under legislation currently before state parliament.

The Australian Chamber of Commerce and Industry said the wage increase was “too much amid current economic pressures and uncertainty”.

But the Fair Work Commission argued the increase was needed based on key differences in economic indicators.

The commission’s president Ian Ross said there had been a “sharp increase” in the cost of living and a strengthening of the labour market since last year’s review decision.

“At the aggregate level, labour market performance has been particularly strong,” he said.

“The unemployment rate has fallen to 3.9 per cent compared to 5.5 per cent in April 2021 at the time of the last review.

“The improvement in the labour market is forecast to continue in the period ahead.”

Meanwhile, unions welcomed the commission’s decision to lift wages by 5.2 per cent, despite initially pushing for a 5.5 per cent increase.

SA Unions Secretary Dale Beasley described the decision as a “historic increase” that would benefit about a quarter of Australians.

“Even now, when it’s well accepted that workers are struggling to make ends meet, even after a decade of growth in profits and productivity for employers, there were many voices still pushing for big real wage cuts,” he said.

“If it wasn’t for the efforts of the union movement, Australian working people and their families would have seen no relief from cost-of-living pressures.

“Today’s announcement will start to turn the tide for many workers, especially those who are earning low wages coupled with insecure work, but we still need wage growth across the economy.” 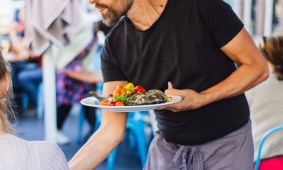 $40 a week pay boost for millions of workers

However, SA Unions warned there were “still 8.5 million workers who don’t know where their next wage rise is coming from”.

It comes as the wages of politicians, judges and senior public servants will rise by 2.75 per cent from July 1 following a determination from the independent remuneration tribunal.

The Albanese government had argued for a rise that ensured wages did not go backwards when compared to inflation, which sits at 5.1 per cent.